Treasures of the Uwajima Date Clan

The Sendai City Museum in Miyagi Prefecture will hold the Treasures of the Uwajima Date Clan special exhibit from October 9th to November 23rd, 2015. The museum's permanent exhibit hall highlights the origins and developments of the Date Clan, founders of Sendai City. However, this special exhibition gives visitors a rare chance to learn about the branch clan which set up in Uwajima, Ehime Prefecture.

The story begins with Date Hidemune, eldest son of Sendai Domain's first fuedal lord Date Masamune. Date Hidemune was born in 1596 by Lady Iisaka, a concubine. As the son was not born by Masamune's true wife, Megohime, he would not be able to be successor to the Sendai Domain. In 1614, Masamune and Hidemune took part in the Osaka Campaign to help the Tokugawa shogunate rid of the Toyotomi clan. After a successful campaign, Masamune was awarded a large territory in Ehime Prefecture where he immediately set up Hidemune as leader. The branch clan flourised under Masamune's advice and Hidemune's rule.

Extravagant artifacts from the Uwajima Date Clan are on display during this special event. Historical reords, several masterful sreen paintings, and over-the-top lacquered daily utensils show the luxury and wealth the clan members must have enjoyed. Some visitors are overwhlemed by the set of three distinct sets of elaborate armor worn by clan leaders. Others find charm in regular and miniature noh theater masks hiding in a corner. On the first floor of the museum there is a room with tourist information about Uwajima. Special exhibit in Japanese only (permanent exhibit in Japanese and English). 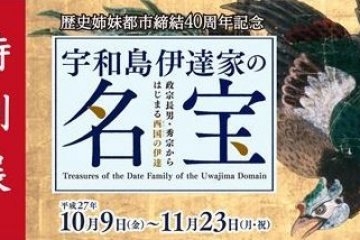