Mima is a rice producing area located between Matsuyama and Uwajima. Until recently, it was hardly on the map for most visitors, but since the expressway has pushed on south to Uwajima past Mima, the attractive Road Station or Michi no Eki at Mima has become a strategic point. Unusually for a Road Station, Mima has both an industrial museum and an art gallery, dedicated to two illustrious sons of the area.

The industrialist Kunisaburo Iseki, born in 1899, invented and marketed machinery for producing rice. His company is still active today, with a global reach. The artist Umetaro Azechi was born in 1902. He struggled for years to establish himself as a woodblock artist, eventually becoming known around the world for his distinctive naïve prints.

The museum is divided into two main parts, devoted to each man. Iseki’s half displays some examples of his rice planting and harvesting equipment. These are beautiful bright red and white machines, and you can still see these machines at work in the fields of Ehime today. There’s also a pretty diorama of Iseki’s home, which looks idyllic but which doesn’t really convey the hardship of rice-growing before Iseki made it easier. A push-button video shows how things used to be done in the old days. There are some fascinating photos of Iseki as the proud Japanese industrialist growing his business empire and even meeting Emperor Hirohito. It would be easy to mistake Iseki for the emperor...

Azechi’s gallery has many examples of his work, as well as a reconstruction of his studio, with lots of his books and tools. I was very tempted to look through some of the books from last century, but several signs asked me not to. An interesting and visually appealing display shows the laborious woodblock printing process used by Azechi and other famous Japanese artists, while the actual woodblocks he used for some of his representative works are displayed in sequence. Besides naïve prints, Azechi also produced woodblock cartoons and oil paintings.

Separating the two main exhibitions is a display of the fish carved in stone by Yoshito Fujibe, also from Mima. His distinctive stone fish can be seen all over southern Ehime as public art.

Those who are interested in architecture will no doubt enjoy the wood and concrete construction of the gallery. 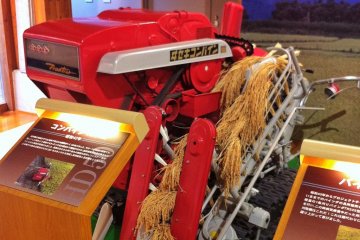 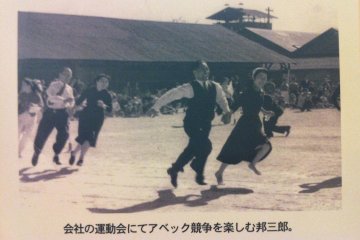 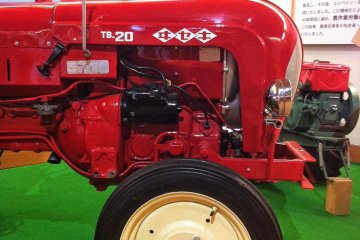 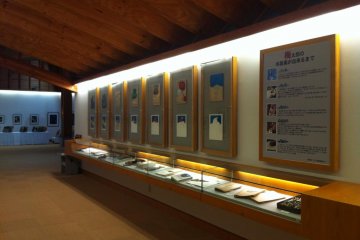 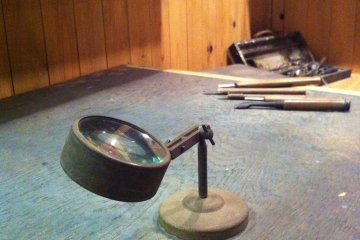 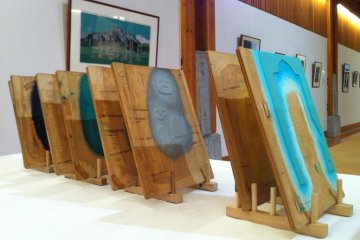 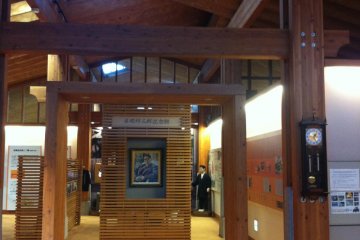 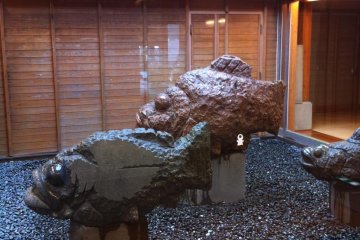