No. 41 of the Shikoku 88 temple pilgrimage

Ryuko-ji, the Temple of the Dragon’s Light, is temple No. 41 of the 88 sacred temples of the Shikoku pilgrimage. It’s located in the hinterland behind the port city of Uwajima. I visited the temple on a Saturday when an autumn typhoon was bringing heavy rain to Ehime, but there were plenty of pilgrims there with raincoats and umbrellas. Ryuko-ji stands on a hillside up a steep flight of stone steps in a valley. Visitors could be forgiven for thinking Ryuko-ji is a Shinto shrine rather than a Buddhist temple because the first thing you see from the road is a very lichen-mottled stone torii gate, and further up the hill, another red wooden torii. And as everybody surely knows by now, torii gates are for Shinto shrines.

The approach to Ryuko-ji is narrow, with houses and shops on either side. The shops sell fruit in season and some rather tasty manju cakes. I enjoyed the flowers blooming in the gardens of the homes.

Every temple on Shikoku’s pilgrimage route has a building called the Daishi-do to venerate Kobo Daishi, the founder of the pilgrimage. The one at Ryuko-ji is a rather undistinguished building with nothing in particular to recommend it. The Hondo or Main Hall itself could easily be confused with the Daishi-do since it’s the same size and shape. At most of the pilgrimage temples, the Main Hall is bigger. Without the helpful Japanese signs in front of each building, you wouldn’t know which was which.

The real interest at Ryuko-ji lies beyond the unremarkable temple buildings further up the hill where the shrines are. At the top of the stairs is a shrine to the Inari or fox deity, whose shrines are typically red. And if you go behind this shrine, you find a very old-looking building that was once red, enclosed entirely within another structure. Next to this is a shrine with a red metal roof that was glistening in the rain. The weathered wood of the shrine struck me as particularly beautiful. The view back down over Ryuko-ji and its valley from the top of the steps is quite impressive.

Ryuko-ji is one of two pilgrimage temples located relatively close together. The other is Butsumoku-ji No. 42. 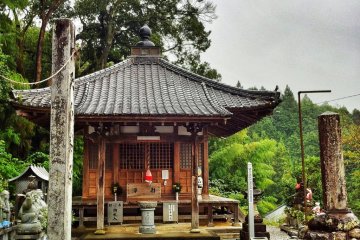 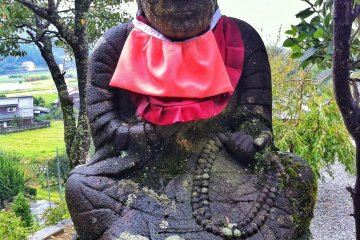 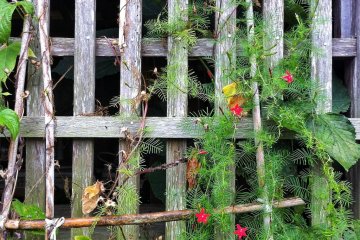 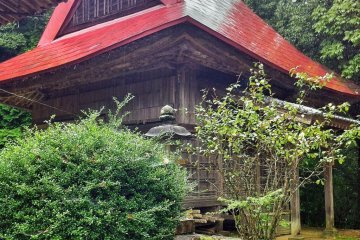 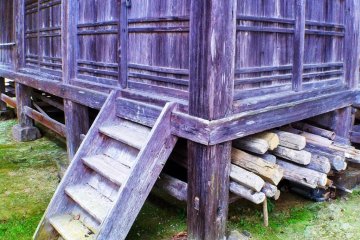