No. 42 of the 88 temples of the Shikoku pilgrimage

Butsumoku-ji, the The Temple of the Buddha’s Tree, is temple No. 42 of the 88 sacred temples of the Shikoku pilgrimage. It’s located in the hinterland behind the port city of Uwajima. I visited the temple on a Saturday when an autumn typhoon was bringing heavy rain to Ehime, but there were plenty of pilgrims there with raincoats and umbrellas. Butsumoku-ji stands nestled in a grove of cypress trees close to the highway to Uwajima. As you approach from the direction of Ryuko-ji, No. 41, the temple appears as a fascinating variety of roofs rising out of the trees.

One of these roofs is the unusual thatched roof of the temple bell house. This rustic-looking structure covered in moss must soon be due for renewal. The Hondo or Main Hall is topped with a flaming gold ball representing the teachings of the Buddha, which stands in stark contrast to the dark trees behind it. Every temple on Shikoku’s pilgrimage route has a building called the Daishi-do to venerate Kobo Daishi, the founder of the pilgrimage. The one at Butsumoku-ji is a beautiful structure with sinuous lines made of light grey wood with white plaster in between. If you venture around the back of the Daishi-do, you find that it’s built in the style of a shrine with a separate structure behind it.

Besides the Main Hall and Daishi-do, there are two other attractive buildings in varied styles nearby.

The grounds of the temple are planted with many beautiful trees including magnolia, maple and camphor. When I visited, the shrub called kinmokusei in Japanese or fragrant olive in English was in bloom, gracing the temple with its intense autumnal perfume. The shrub was inhabited by some brightly colored beetles with big, pointed mandibles. All-in-all, I found Butsumoku-ji an attractive and interesting temple.

Butsumoku-ji is one of two pilgrimage temples located relatively close together. The other is Ryuko-ji No. 41. 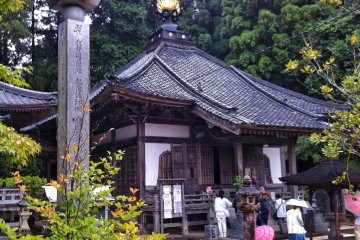 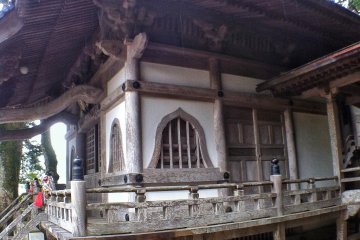 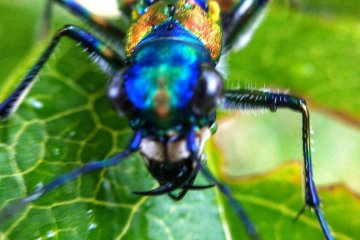 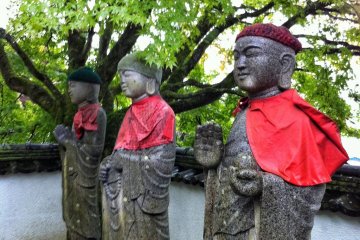