Temple No. 57 of the Shikoku 88 temple pilgrimage

Eifuku-ji is Temple No. 57 of the Shikoku 88 temple pilgrimage. I visited it after Senyu-ji, Temple No. 58, so I was doing my pilgrimage backwards, which some say is lucky. From this direction, a long road leads up to Eifuku-ji which stands in a forest of bamboo. It was a cold, blustery day in early spring and the bamboo was moving like the sea in the wind. Only the temple buildings were standing still in a swirling mass of greenery.

As I parked my car just below the temple, a group of Buddhist priests arrived in a minivan. They were all dressed in black, and I noticed one of them was wearing combat boots. Of course their heads were shaven, as is mine, but for different reasons. They and I looked at each other curiously, and we all seemed to blurt out “Konnichiwa!” at the same time. Temple-going is very convivial, and only a churlish person wouldn’t greet another pilgrim.

The precinct of Eifuku-ji is very small, as are all the buildings within it. Every temple on Shikoku’s pilgrimage route has a building called the Daishi-do to venerate Kobo Daishi, the founder of the pilgrimage. The one at Eifuku-ji is on the site of a former shrine to Hachiman, the Shinto god of war, who found himself transformed into the peaceful Amida Buddha when the old shrine became a temple. The Daishi-do is however carved with magnificent dragons, which made me want to go and conquer somewhere.

The group of priests chanted sutras beside the Hondo and Daishi-do. One of them was vigorously marking quick-time with two blocks of wood joined by a string. This little instrument gives off a very high-pitched chink-chink-chink sound, which you can hear at most of the pilgrimage temples.

At Eifuku-ji, there’s a brown building in a modern style that dominates the temple. This building would be unthinkable in the UK where I come from—planning permission for something so glaringly different would simply not be granted. Nevertheless, it’s a fine building and I wanted to go inside. Unfortunately it’s the private home of the resident priest, so it’s not open to the public.

When you come out of Eifuku-ji, if you turn right up the hill and under a beautiful stone torii gate, you come to a Shinto shrine, Ishishimizu Hachiman Shine. It offers a wonderful view over Imabari and the Seto Inland Sea. Most pilgrims don’t seem to bother with this, but I highly recommend that you do.

Eifuku-ji is one of six pilgrimage temples located relatively close together in Imabari. The others are, Senyu-ji, Enmei-ji, Nankobo, Kokubun-ji, and Taisan-ji. If you choose to visit several of these on a weekend, you’ll probably see some of the same people at each temple because they will be doing exactly the same thing as you. The “Hello again!” thing tends to become something of a running joke. 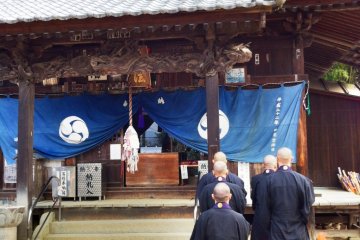 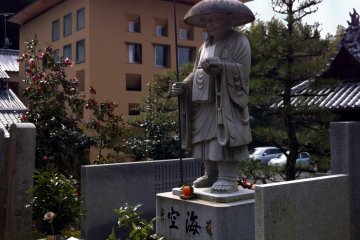 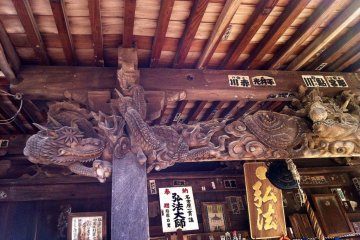 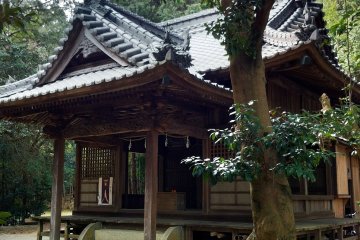