Temple No. 58 of the Shikoku 88 temple pilgrimage

Senyu-ji is a temple in Imabari. It’s temple No. 58 on the pilgrimage of 88 temples around Shikoku, and one of the more impressively located pilgrimage temples. It stands on a hillside 1,300 feet above sea level, which means that pilgrims who walk to it have quite a climb. I went by car, so it was relatively easy, but the car did labor a bit. The last part to the temple is a long climb up a road lined with sandy cliffs where rocks are constantly falling. Midway up the road, you come to a temple gateway standing all alone with some striking, yellow guardian deities within it. If you’ve come by car instead of walking like a pilgrim, you can park here if you wish and climb a long flight of steps up a green and leafy valley to the temple. Otherwise, you can carry on up the road to a car park next to the temple.

There isn’t much room on the hilltop, so the temple precincts are quite small. The main hall or hondo is best appreciated from the side. There’s a pond with trees and shrubs around it, and a stand of bamboo, and the old roof tiles of the temple rising elegantly above it. Every temple on Shikoku’s pilgrimage route has a building called the Daishi-do to venerate Kobo Daishi, the founder of the pilgrimage. The one at Senyu-ji is close to the main hall and is unremarkable.

However, behind the daishi-do is a flight of concrete steps which leads up into the hill behind the temple. This path passes through pleasant woods of evergreen and deciduous trees with sasa bamboo. It’s lined at intervals with attractive Buddhist statues. Most visitors to Senyu-ji don’t know about the path, so you’re likely to be on your own. I enjoyed the birdsong and the sound of the temple bell receding and mellowing as it got further away. The path leads to a hilltop with panoramic views of Imabari, the Shimanami-Kaido suspension bridge and the Seto Inland Sea. For this walk, sensible shoes are a must.

Senyu-ji is one of six pilgrimage temples located relatively close together in Imabari. The others are Eifuku-ji, Enmyo-ji, Nankobo, Kokubun-ji, and Taisan-ji. If you choose to visit several of these on a weekend, you’ll probably see some of the same people at each temple because they will be doing exactly the same thing as you. The “Hello again!” thing tends to become something of a running joke. 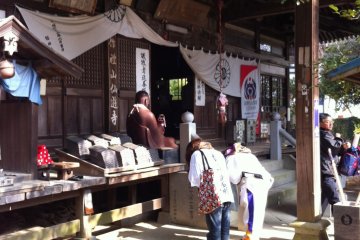 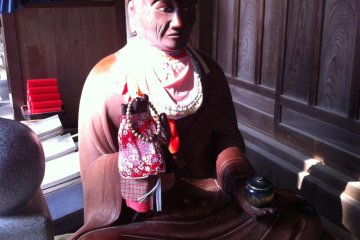 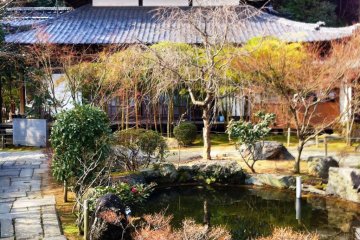 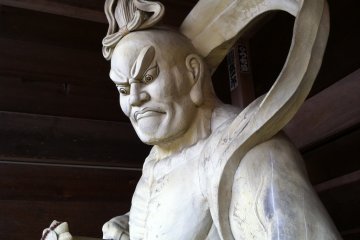 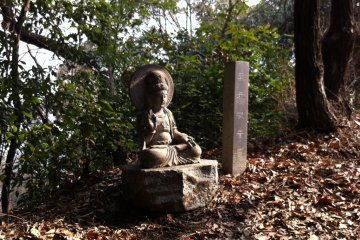