Temple No. 45 on the Shikoku 88 temple pilgrimage

Iwaya-ji, the Temple of the Rocky Cave, stands in a valley of fantastically worn and pitted hills in the area known as Kuma Highland in central Ehime. Kuma is the name of a woman who allegedly lived all alone in this once poor area. When the celebrated priest Kobo Daishi and founder of the Shikoku pilgrimage passed through, she begged him to provide her with company, so he miraculously produced a river. This enabled crops to be grown, and soon farmers arrived. Kuma had company. The town that they established is named after her.

If there’s one temple you really should visit in Ehime, Iwaya-ji is it. It inspires awe, from the trek up the hillside, to its location embedded in a pock-marked cliff, and the beauty of its structures.

From one of the several car parks near the river, a path leads steeply up through mossy woods. Birds sing. Towards the top, flowering shrubs present an array of pink and white blossom. There are little Buddha statues lining the path with jewel-like greenery growing on them. Sunning itself on the path I saw a long snake of a harmless variety. On the way up, I overtook a voluble, overweight middle-aged gentleman who was sweating profusely. The hill carries sound very clearly, and below me I could hear him bellowing, “What, more steps?! Damn it’s hot today!”

It was hot, and there were lots of steps. But the scene at the top is worth the effort. It’s astounding. The home of the temple priest is built against a cliff that rises straight up into the sky. The cliff looks like mud with rocks in it, and it’s pitted with holes. A stout wooden ladder goes up to one of the larger holes and you can climb it to admire the view of the entire temple complex and the valley below. But remember, what goes up must come down, and the descent calls for more courage than the climb.

Every temple on Shikoku’s pilgrimage route has a building called the Daishi-do to venerate Kobo Daishi, the founder of the pilgrimage. The one at Iwaya-ji was built in the Taisho period, and it’s grander than the Hondo or Main Hall itself. The pillars that support the porch could almost be Roman.

Beyond the Daishi-do, a path leads up through a beautiful old gateway. The path meanders about in the woods behind the temple and it’s lined with some fairly uninteresting statuary. The mossy trees and rocks however are wonderful.

Iwaya-ji is one of two pilgrimage temples located relatively close together. The other is Taiho-ji No. 44. 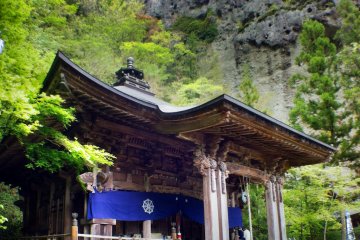 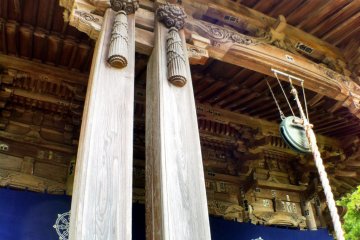 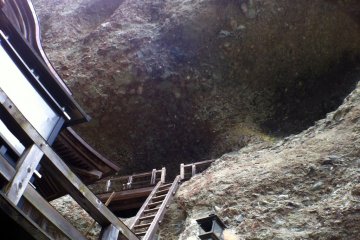 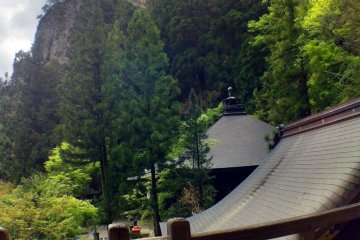 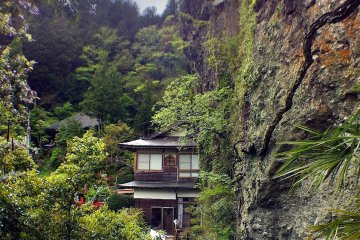 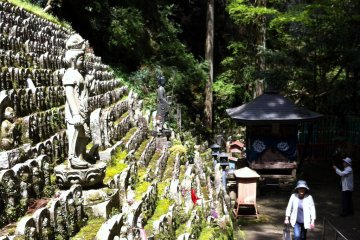