A trip to Japan isn’t complete without a visit to a castle. The country was once dotted with thousands of strongholds of feudal lords, but the ravages of conflicts and the zeal for modernizing Japan after the Meiji Period meant that many castles were destroyed. There are only twelve castles in Japan that retain original tenshu, or castle keeps, none in the region around Tokyo.

However, interest in castles never really disappeared, and in the heady days of the 1980s Bubble Economy, local governments splashed out on restoring and recreating castles. Edo Castle is the only Tokyo location to preserve remaining turrets, walls and gates from Japan’s feudal past, but if you’re keen on seeing castle keeps within easy reach of Tokyo, albeit reconstructions and some remaining structures, look east to Chiba Prefecture.

This breathtaking viewpoint at the center of the Kanto Plain is today Sekiyado Castle Museum, managed by Chiba Prefecture. Located at the northern tip Noda City, the castle once was the center of river trade on the Edo and Tone Rivers. The museum, built in the 1990s on the pattern of typical castles of the time has galleries with engaging exhibits chronicling the heyday of the castle and the taming of the rivers. In spring, the castle hosts Sakura Festival with period recreations and processions and a big fireworks festival in August. The original gate was relocated to nearby Sakasai Castle across the Tone River in Ibaraki Prefecture.

Sakura Castle in Sakura City was a large fortification that curiously had no stone walls. Defense of the flatland castle was dependent on deep moats which visitors can see today. Nothing is left of the turret, relocated from Edo Castle. The consolation is the National Museum of Japanese History which occupies the northern part of the castle site. Nearby are well-preserved samurai quarters. A good time to visit is spring when the cherry trees along the old baileys burst into bloom. If you miss the fleeting flurry of pink, also in April is the Sakura Tulip Festa just north of the castle site.

With an excellent view of Chiba City is Chiba Castle. While the Chiba clan did have fortifications here dating from nearly 1200 years ago, the structure bears no resemblance to the originals that stood on the site. The reinforced concrete structure may be a fantasy Japanese castle, nevertheless, it is quite beautiful. For samurai enthusiasts, the Chiba City Folk Museum inside is worth a visit for the permanent exhibition of matchlock guns, armor, and swords.

If you’re looking for something closer to an authentic castle experience, a day trip to Osaki Town offers a glimpse of castle history in lovely surroundings. The original keep was lost, but drawings of the castle were referenced in the 1970s reconstruction of Otaki Castle. Some original structures remain, including a yakuimon gate. What makes Otaki so charming is the deep forest and preserved town buildings.

Kururi Castle is a reconstruction that captures the sense, if not the plan, of the original warlord's seat in Kimitsu City. It's a bit out of the way, but that's its charm. Looking out from the reconstructed keep there are no big structures, just hills and valleys. You can imagine the warlord gazing over his domain at this castle which dates from the 1500s.

Tateyama Castle, not quite a faithful reconstruction of the original lost to the conquering Tokugawa Shoguns in the 1600s, gives an impression of the splendid seat of the Satomi clan that ruled this region. Overlooking Teteyama Bay, and affording views of Mt. Fuji on clear days, this castle houses Hakkenden Museum which celebrates the epic novel Nanso Satomi Hakkenden. Visit the museum to learn about the tumultuous history of the Satomi Clan members. 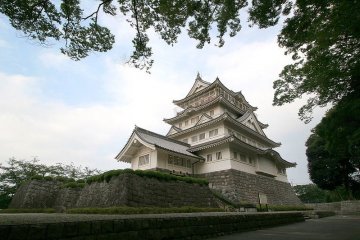