Visit a temple or shrine in Japan, and you'll typically see a bunch of ema – wooden plaques which are used to write prayers or wishes on. Some of them are quite simple, but others have more fun or elaborate designs. This guide covers several unique ema which you can find across the Tokyo area.

Koenji Hikawa Shrine is a place where people often come to pray for good weather for important events. The ema here are shaped like geta (a traditional type of sandal), and you may be wondering "what does that have to do with the weather?" Well, a childhood weather predicting game was often played with these sandals – flip it in the air and it lands right side up, and you're meant to have sunny skies ahead. Wrong side up, and rain is headed your way.

Bentendo Temple is located within Ueno Park, and it's dedicated to Benzaiten, a goddess of water. Temples dedicated to Benzaiten are often built near bodies of water, and that's the case with this one – it sits on an artificial island surrounded by a lotus pond. Along with water, Benzaiten is also seen as the goddess of anything that flows (for instance, music and dance), and the ema here are designed in the shape of a biwa (a traditional Japanese musical instrument).

A popular shrine for those seeking their perfect match, Imado Shrine is also said to be the birthplace of maneki neko – the lucky waving cats that you may have seen depicted in statue form. The ema here are adorned with pictures of an adorable maneki neko pair, and they're also in a circular shape as opposed to the more common rectangle style.

Kanda Shrine is also known as Kanda Myojin, and it's located in close proximity to the Akihabara area – it's a popular spot for anime and manga fans. The shrine itself has also been used as a setting in the Love Live! anime, and as a result the ema here are often adorned with anime characters. 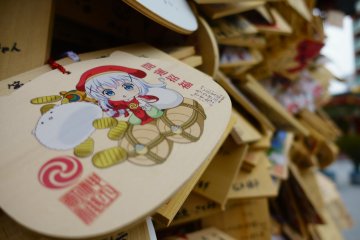 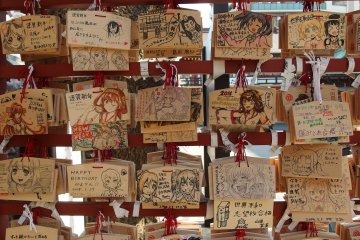 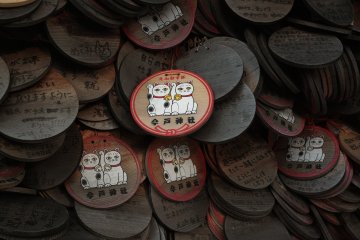 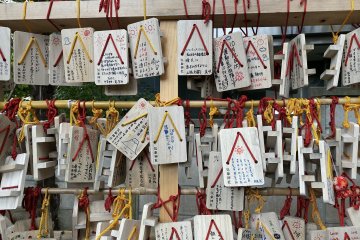 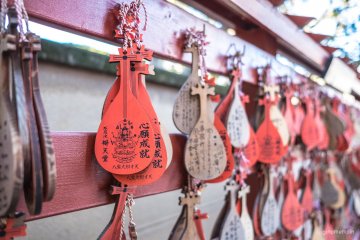