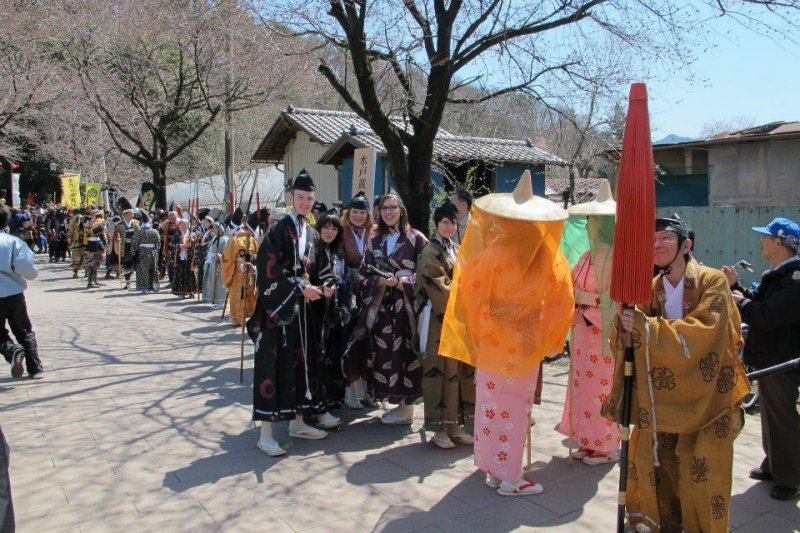 Costume play with a difference

Every year since 1985 the tiny town of Kanra in Gunma prefecture hosts its very own samurai parade. Though most Japanese towns have their matsuris, few involve getting decked out in full, ancient warrior authenticity, complete with sword, and marching through the streets to the applause of delighted onlookers.

Whether you are a samurai aficionado, a history buff, or simply want to admire the spring cherry blossoms in a different setting, Kanra town samurai festival really is a spectacular and unusual day out.

As the long line of people, dressed in the actual relics of days bygone, make their way through the cobbled streets in Obata, it feels a lot like history coming to life. The cavalry on their horses clip clopping through cherry blossom lined streets, the geisha in full kimono with painted faces, and the customary celebrity levitating on a wooden platform... It’s like Japan’s very own version of a Disney parade. (Except completely free!)

When the walking is done, everyone gathers in the scenic park to witness traditional taiko performances from adorable children wearing miniature happi, and seasoned experts, whose powerful drumming skills leave you envious with awe. Following this, two samurai take to the stage to perform a mesmerizing dance-like battle, thankfully dodging out of the way of one another’s swords, topped off with canons firing into a setting sun and blazing red, spring sky.

Scores of stalls line the edges of the park, selling everything from Gunma’s famous “yaki manjuu” (grilled bread on a stick covered in a sweet soy sauce), salt flavor ice cream (surprisingly nice!), yakisoba (fried noodles and vegetables, kind of like a stir fry), takoyaki (octopus inside a batter ball) to western food such as fried chicken and fries. If you’re the type who wants to sample one of everything, you can lay out on the grass under the sun’s warming rays and sleep it off.

If this sounds up your alley, why not get involved? The town are always keen to include foreigners in the parade. As long as you don’t mind sacrificing your desired role of Japanese princess for savage samurai, weighted down in several hundred layers of cloth, while your friends laugh on the sidelines...