Japan abounds with natural attractions, be they snow-capped mountains, lushly forested hills, or sparkling lakes and waterfalls. However, even nature's more violent, sometimes deadly features can also provide interesting experiences, once the danger has passed, of course. One such place is Oni-oshi-dashi, a volcanic 'Stone Magma Park' not far north of the resort town of Karuizawa, which in its myriad of rock formations possesses an improbable rugged beauty.

It was formed in 1783 by a stream of lava from a massive eruption of Mount Asama, a volcano whose crater marks the border between Nagano and Gunma prefectures. (Oni-oshi-dashi translates roughly as 'Demon pushing out rocks', a name given the area by locals terrified by the violence of the eruption.) The lava flow mixed with hot mud already on the slopes, then cooled and hardened into the jagged, rocky terrain that we can see today.

Walking around the paths, there's an otherworldly atmosphere, like being on a weird alien planet from 'Star Trek', or in some remote abandoned Siberian quarry. There's plenty of fun to be had putting imaginary names to the shapes in the rocks; there are some in particular that are seen as resembling animals, or even people, such as 'Shrine Dog Rock' and 'Parent and Child Rock'.

Despite being formed of rock, the park isn't all jagged and gray. The prodigiously fertile volcanic soil sees greenery sprouting everywhere among the rocks, all shrubs, grasses and hardy trees, and there's a dedicated path you can follow to see bright seasonal flowers blooming from May to July. Darting, zipping dragonflies share airspace with butterflies who in this setting seem impossibly delicate, and there's an extra splash of color provided all year round by the vermilion buildings of a temple sitting proudly on a rise in the center of the park. Here you can take a well-earned rest, line up to bong the large bell, or potter round and enjoy the panorama from the balcony.

Visitors are catered for pretty well, but in a way that doesn't impinge too much on the beauty of the surroundings. The paths are smooth, stroller- and wheelchair-friendly, there are frequent sheltered rest points, and of course there's the usual cluster of souvenir shops, food stands and the like at the entrance. It's also not only the rocks that make for good sightseeing; the terrace outside the restaurant commands a fine view down the lower slopes of the volcano and across the plateau at its base to the distant low mountains beyond. The greenness of the vista stands as a contrast to the rocky terrain above and around, and reminds you just how unique Oni-oshi-dashi is.

Note that it's closed in winter, open only from April to November. 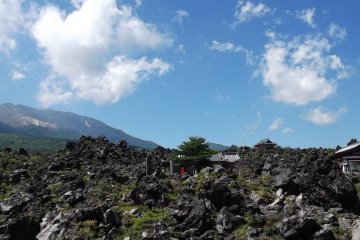 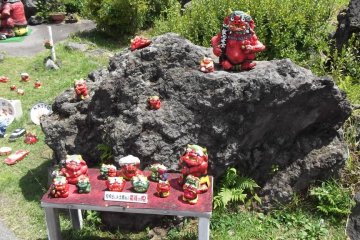 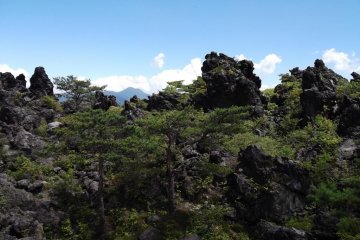 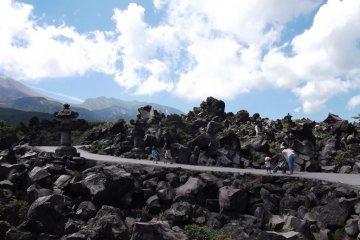 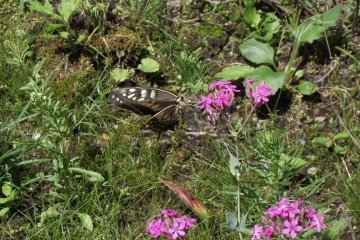 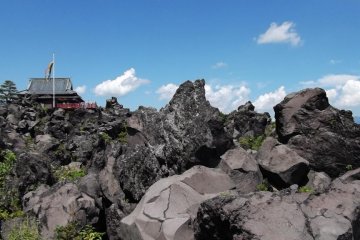 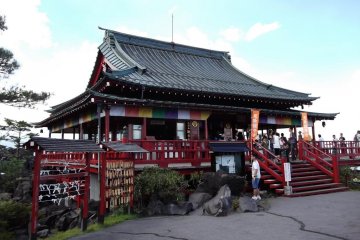 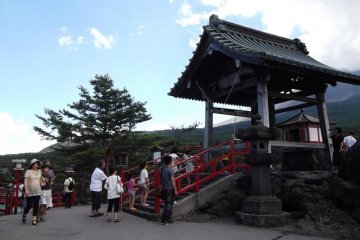 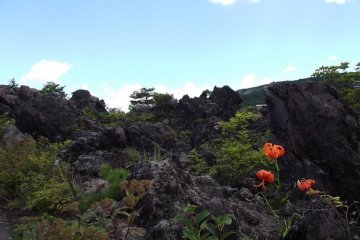