Miyajima is defined by the iconic Itsukushima Shrine, a dominant and dazzling presence which imbues Miyajima, Island of the Gods, with its mystique and magic. Not absolutely. I also found magic and mystique meandering through some “miracle spots beyond Itsukushima Shrine”, as termed by a tourist brochure. I talk about a few.

This sad looking temple seemed decrepit, unloved, especially next to its neighbour, the full-of-shine Five Storied Pagoda. Senjokaku is Miyajima's biggest building, it is also known as the Pavilion of the Thousand Tatami Mats (actually just 857). It was built around 1587 which explains the cracked-in-places wooden beams, faded paintings, worn out floor. But I loved it. I felt stuck in time standing in the middle of its one cavernous and bare hall. I could feel the ambience, as they say.

Standing up, plastering the walls, even stuck on the rafters of the temple, were hundreds and hundreds of wooden rice paddles of all shapes and sizes. I found out that many kamikaze pilots during the war wrote their names on these wooden rice paddles, rice being the Shinto symbol of good luck. They hoped they would return to pick them up. This seems to have been a custom, because soldiers who fought in the early wars did the same thing. They hoped that as one “scoops the rice”, one would also scoop good luck. These early soldiers left their scoops in Itsukushima, but there aren’t any there.

Senjokaku was built by Hideyoshi Toyotomi, the son of a peasant, who overcame his peasant birth to become one of the most remarkable men in Japanese history, mainly for his role as one of the three unifiers of Japan, although he suffered unfortunate nicknames like “monkey” and “bald rat”. He built Senjokaku for the reciting of Buddhist sutras to soothe the souls of the fallen war dead. No wonder I felt an atmosphere. Kamikaze pilots, fallen dead.

I actually visited this temple twice, sort of. The first time I staggered to the entrance after hiking, or rather crawling down, from Mt Misen, and one look at the steps going up, I really didn’t care it was the temple with the oldest history in Miyajima, founded by the priest Kukai or whoever in 806, whatever. But when I returned the next day, I would have been sorry to have missed it.

Daishoin is a complex of holy enclaves and enclosures rather than a singular temple. I don’t think I saw everything. I definitely missed a cave containing 88 icons symbolizing the 88 temples of the Shikoku Pilgrimage, and a flame supposedly burning for more than 1200 years.

The Nio Kings, two fearsome statues that ward off evil, guard the entrance, the Niomon gate. I was intrigued to see prayer wheels, Mani Wheels, placed in the middle of the steps going up. Each is inscribed with a sutra for you to spin as you go, to receive the same blessing as if you were chanting the sutra. They are also a good way to take your mind away from the climb up.

The temple complex is rich with many other representations of Buddhism. There are the one thousand images of Amida Nyorai, or Buddha of Infinite Light, which will transport the deceased to the Western Paradise. There are statues of five hundred disciples of a venerated priest, each with a unique facial expression (I read somewhere it is 1000). A plain slab of stone, the Hōchōzuka Monument, is where a ceremony is held to, of all things, give thanks to old kitchen knives.

I also spotted the Jizo Bosatsu that sanctify the spirits of lost babies and children. Worshipers pour water on these jizo to comfort the souls of the departed. On my walks in Miyajima, especially on Mt Misen, jizo abounded around almost every nook and corner, some with the common knitted red baby bibs and caps, sometimes with something personal at their feet, like a cuddly toy, matted and grungy, a wee baseball glove, a toy handphone.

Tucked away on a hillock far from the town center, I discovered an old nondescript hunk of stone, with faded inscriptions. This is the monument that commemorates the founder of the wooden rice paddle, or rice scoop, the symbol of Miyajima. The monument overlooks a rather splendid scene of the Inland Seto Sea, and of course, Itsukushima sparkling in the distance. Two benches have been thoughtfully provided for a bag lunch break.

The rice scoop’s origins came about when it dawned upon the venerated priest Seishin that Miyajima relied for its existence on visiting noble and royal worshipers of Itsukushima - a risky reliability. He had a brainwave, or some say a dream wave, to create an industry making wooden rice scoops shaped like biwa lute instruments to provide an alternative livelihood. Seishin also saved Miyajima from a water shortage by digging a well. He was in his heyday loved as a saviour and benefactor.

I found a giant paddle exhibit in the main shopping street. It is next to a Momiji Manju shop, the maple leaf cakes famous in Miyajima and Hiroshima. Poor priest, people seemed to prefer to eat rather than look at history, judging by the throngs around the shop, with zero at the paddle exhibit. No one was beating a path to the Senshin Monument either.

All the three trails leading to Mount Misen are said to only take 1.5 to two hours to reach the summit from town. They don’t. I took the ropeway or “skywalk” to the last stop, the Shishi-iwa Observatory, and it was already a considerable climb of much much more than an hour to reach the top.

I walked to the ropeway station via the Momijidani Park, named for its plentiful maple trees (about 700) first grown during the Edo period. It was a beautiful nature walk of shinrin-yoku, forest therapy. The ropeway pulls you through dramatic primeval forests of bleak sticks of trees. You look behind you at the sea and of course in it, the Itsukushima Shrine.

It is all gawk and gape from the summit at Mount Misen Observatory. The Inland Seto Sea is a blanket of blue, studded with numerous islands just languishing around. They have names, and I noted one just for me, “Island of Contrary Person.” I had to drag myself away from the summit and meander off to the other goodies on the mountain.

The most significant of these was of course on another little mountain top, reached by another little climb, the Kiezu-no-Reikado Hall or Eternal Fire Hall. It contains the holy fire which Kobo Daishi, probably the most famous and revered Buddhist priest in Japan's history, used as part of his religious training, and it is still burning after about 1200 years. More meaningfully, it was used to light the Flame of Peace at Hiroshima’s Peace Memorial Park. Here I could feel what is meant when Miyajima is referred to as a sacred place.

This description of Miyajima dates to 806, when the just mentioned Kobo Daishi popped in on his way to Kyoto. Moved by the spirits and the holiness of the place, he built a main hall (Misen Hondo) on Mt. Misen. It is still there. Misen was worshiped as a spiritual and holy site as early as the 6th century. The awe and reverence it inspires links worshipers through many centuries.

I skipped and gamboled around Mt. Misen fresh-eyed and bushy tailed. I hadn’t had to start walking down yet. I actually forgot about it. I forgot the golden law of gravity, 'What goes up must come down'. I did not take the ropeway down. I walked, then trudged, then “crabbed” – taking steep steps down by going sideways. The trail was cemented, making a frightfully steep descent even harder on the knees. I was gratified to find younger walkers stopping to catch their breath, and looking to see if turning back was possible. It wasn’t.

I did want to fall on my knees and thank God when I first beheld it, that sense of not believing there it was, all of 1,400 years of history, mine to see and touch. At low tide, you can walk right up to its Torii Gate, on a beach of coins, many rusty with time. The Torii Gate is revered as a boundary between the spirit and the human world. Maybe this was why the crowds were all only on one side. The Torii continues to stand tall and defiant against rot, insects, and the passing of time.

Inside the shrine are numerous hallowed halls containing the holiest of holiest relics, archives, memories, some so hallowed, folk like you and me aren’t allowed in. As I ambled through with a few thousand others, a rope kept us in order in one direction to the exit, where a severe vestal virgin type ensured we didn’t dart back in.

There is a unique café opposite a red canal bridge just by Itsukushima. It has a small red bus as its front. According to a poster on the neighboring ice cream wafer shop, Obama loves Japanese ice cream. He had just recently visited Hiroshima.

Nature, too, in Miyajima

When I pushed out from the town center, I soaked in the plush peacefulness of tree-shaded walks, my own private parks, little historical sites, such as a deserted hill where some famous swashbuckling battle ensued. The shinrin yoku effect is thankfully as ubiquitous in Miyajima as its rice paddles and momiji manju.

There is one part of nature that’s a pain in the neck. The pesky deer. They are viewed as sacred messengers of the gods. Bah, humbug! They have total disregard for the Fifth Commandment, Thou shalt not steal. They skilfully nose nudge your bag apart so they can blithely help themselves to your bag lunch. Even babies in prams are not safe. Fortunately for them we have to honor the Seventh Commandment, Thou shalt not kill. My souvenir of Miyajima, though, was a hand towel with deer on them. 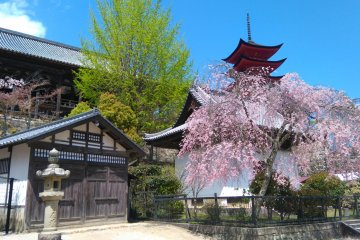 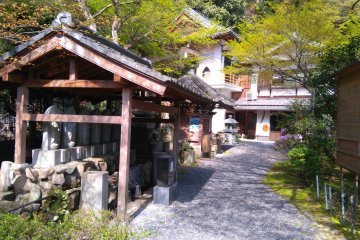 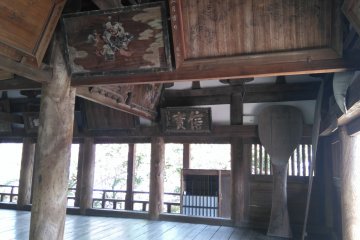 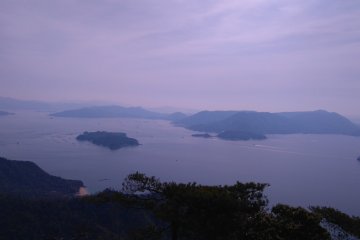 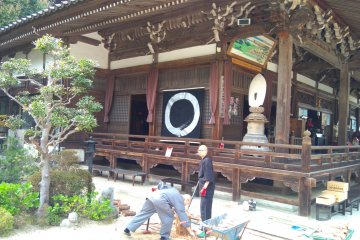