Meet the 13,000 creatures that live in the Inland Sea

The Miyajima Aquarium (Suizokan) is a family-friendly activity for anyone visiting Miyajima island.

Originally built in the 1980s, it has been rebuilt on the same location, but has been completely remodeled. The new version of Hiroshima's only aquarium re-opened its doors in the summer of 2011.

The aquarium doesn't seem as big as the most famous in Japan, but it has an impressive 13,000 creatures of 350 distinct varieties which are found in Hiroshima's surrounding Seto-inland Sea. There are also some popular creatures imported from abroad including penguins, sea lions and otters which are also on display.

The most popular attractions at the aquarium are the shows with the penguins and sea lions which are held several times per day. Feeding times are always popular as divers enter the big tanks to feed the fish, manta ray, eels, turtles and sharks. Penguin feedings in their enclosure are also popular photo opportunities. The otters are a popular display to watch at anytime as they are always entertaining – frantically repeating their swimming and climbing routines.

The "finless" dolphins are one of the most popular attractions and seem very interested in us as they will come up to the glass and look directly at you.

Upon entering, there is a special area dedicated to the bizarre "Kabuto-gani" horse-shoe crabs which have lived in the Japanese waters and migrated in Spring to the shores which now form the Seto-inland sea for millions of years. They are considered by experts to be living fossils as they have not changed in shape, size or lifestyle habit throughout evolution.

On the first floor, there is a tide pool area where children are encouraged to touch and pick up some of the harmless sea creatures on display. Starfish, sea cucumbers, seaweed of many different types and more are fun for kids to interact with there.

Of course, if you are keen, watching one of the live shows can offer interactive opportunities for some lucky people in the audience (sit in the front middle row if you want to interact with the sea lions).

There is also a special event room next to the big tanks which changes every few months. The previous year there was a "magic pictures" exhibit where you could stand alongside 3D-style paintings of sea creatures and 'interact' with them. In the new year, there is a special exhibit for sea-horses ("Sea-Dragons" in Japanese) and 2012 is the year of the Dragon.

On the Miyajima Aquarium website, they have some great short videos of the creatures in action as well as updated information on new creatures, prices and special events.

There is limited information in English on the website, but there is English information inside explaining about the creatures on display. The staff speak only a little English.

There is a small cafeteria offering standard Japanese family restaurant type foods (Japanese noodles and rice dishes). The toilets are both Japanese and Western style and there are diaper changing facilities as well as "barrier free" facilities (with wheelchair access).

Walking directions: Turn right once you disembark from the ferry and walk past the Itsukushima shrine, turn right on the next street after the Temples and you will find it soon after. 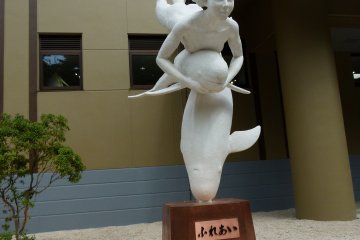 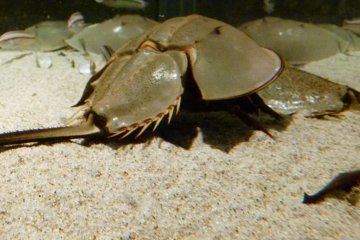 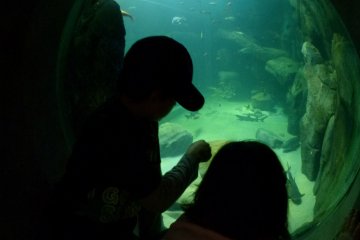