The Shikoku Henro’s more precarious trails are referred to as Henro Korogashi, translated as “pilgrims falling down”. Tokushima has the honor of being the most precarious between Fujidera Temple 11 and Shosanji Temple 12. You bet this Old Tiger didn’t even dream of going near it. But this is the beauty of the pilgrimage for me, its flexibility. The Henro doesn’t come like a Powerpoint template. You do what you can. What I could do was not the number I intended. But who’s counting? As the Rolling Stones sang You don’t always get what you want.

My planned temple visits went awry because after Temples Four and Five, instead of returning as planned, I thought to take in Anrakuji, Temple Six, of Everlasting Joy. All the joy dissipated on what emerged as a 3.5 hour walk, including the walk to look for the bus back. Next day brought a sore back. I had to drop plans for Temples Seven and Temple Eight, and fast forward to temples with walkable distance from the bus or train. Easier said than done.

The Henro routes all assume most people walking in sequence. I didn’t, so I had a merry-go round trying to find the route that would take me backwards, skip a temple, or just find a bus back to base camp, Tokushima. Mortifying was following directions to what I thought was Kannonji Temple 16, then discovering later it wasn’t Kannonji. I have waited at the wrong bus stop. Well, they said Platform 4. How would I know there are two bus companies and thus two Platform Fours?

Bus schedules don’t always cooperate. I had to let a temple or two go on finding the intervals between buses too long or too short.  Some visits were dicey. I particularly wanted to go to Onzanji Temple 18 for Gratitude to One’s Parents. I only had about 50 minutes after being dropped by the bus, within which time I had to do a 20 minute uphill climb, which I desperately shortened by hitchhiking, a quickie visit, a race downhill, because if I missed my bus, it would be a two hour wait before the next one. In the middle of nowhere.

This is where all the temples are, some more “nowhere” than others. I left Temple 14 wanting to find my way to Temple 13 just 30 minutes away - a reverse order – because 13 was where the bus stop was to Tokushima was. But the signs either impel you forward, or there are no signs especially at crucial junctions, or confusing ones. I came across the red henro arrow sign with another painted over in black ink pointing in another direction. Tell me what you would do. I was lost, it was getting dark, no living being in sight, not even a moo-cow, or baa-lamb. My prayers were answered when I saw a lady at a farmhouse. On hearing my plight, she rustled up her husband and they drove me to the bus stand for Tokushima.

On my way to Tatsueji Temple 19, the all important checkpoint to assess one’s journey, I felt a tap on my shoulder, a man telling me I was in the wrong direction. But I showed him the sign pointing in the direction I was taking. He shook his head vigorously and beckoned me to follow him. The temple was where he took me.

I saw henro so tired they were practically reeling across the road. Then mendicant monks, unkempt, unwashed, standing outside a temple, dazed and vacant, while a tape played chants. A henro told me this is their life till they died. They are also common around Tokushima Station, albeit better taken care of.  A thought I've had about the pilgrimage is that it is egalitarian. It unifies and evens out differences as everyone is the same in bringing to the temples their dreams, fears, sorrows, hopes, aspirations. Funnily, we pray for these earthly cares at the temple, but these are what we came to leave behind.

A bouncy 70-year old henro told me if he kept to a steady clip of 14-20 km a day, he could do all Tokushima’s 23 temples in a week. He had done all 88 temples three times, each time taking about 50 days. Actually, I have hated having to forego the temples in my itinerary. It was as if I had skipped stitches in knitting. The temples are not all super architectural splendors, but that’s not the point. Each time a pilgrim visits a temple, it is like they are knitting a stitch into a fabric being continually woven through time and over time. Each stitch adds to the fabric that is the Shikoku Henro. 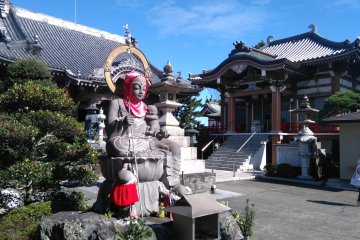 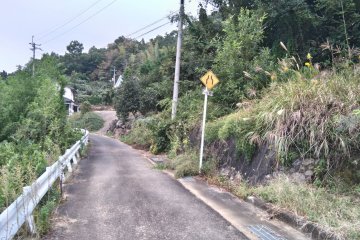 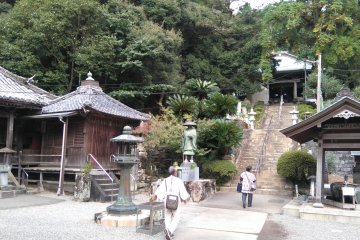 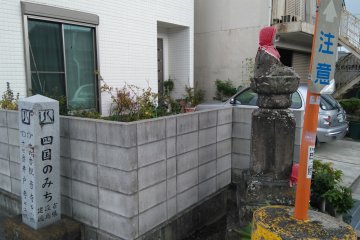 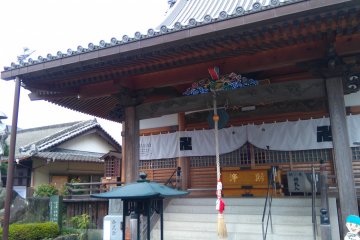