Just a few steps into the course and you find yourself under a canopy of trees   (Photo: Dan Traylor)

A quick and easy hike offering views of the city

Mt. Sankaku in Sapporo looks just like its name — sankaku means triangle — standing out among the many peaks in the city despite reaching only 311 meters (1,020 feet). Reaching the summit should take roughly 30 minutes for an average hiker, and the relative ease of the trail makes it a popular course for families or even the adventurous elderly.

In fact, on my weekday morning trek about half of my fellow hikers were most certainly retirees, offering friendly hellos as our paths crossed. The mountain sits in Sapporo's western district, and the trailhead is reachable on foot from nearby residential areas (including my own residence). I began at the trailhead in the Yamanote neighborhood, though there is another in nearby Miyanomori. The Yamanote trailhead area features a toilet and a station stocked with free hiking sticks that look suspiciously like ski poles. I left the poles alone and set forth.

The trail splits in a few places, offering steeper head-on options or longer, kinder paths. Only a few sections could be considered difficult, requiring extra careful steps and a slowing of your pace (especially on the way down). My out-of-shape body was fairly taxed, but the friendly hikers around me seemed fine despite being decidedly more advanced in years.

I reached the peak in just under half an hour. A pair of benches and large stones offers tired bodies a chance to sit. An opening in the tree line offers views of Sapporo's city center and beyond. Trained eyes will spot landmarks like the Prince Hotel, JR Tower, and the Sapporo Dome in the distance. I spent 30 minutes at the peak, taking some pictures and enjoying a quick lunch before heading down on the same course.

Being such a quick hike, I would recommend approaching the trailhead on foot from downtown, perhaps via nearby Maruyama Park. Another option would be riding the Tozai subway line to Kotoni or Hassamu-Minami and then heading to the Hassamu Riverside Park walking course. Walk southwest toward the mountains until you reach Kiti-Ichijo Miyanosawa road. Head southwest along this main road until you see signs leading to the trailhead. 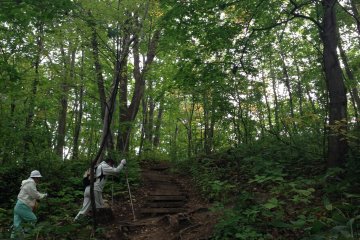 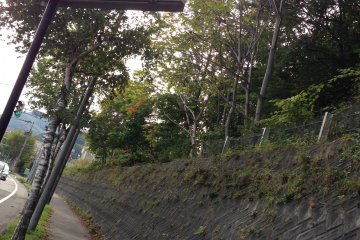 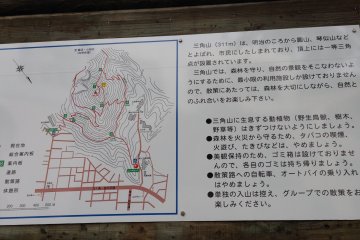 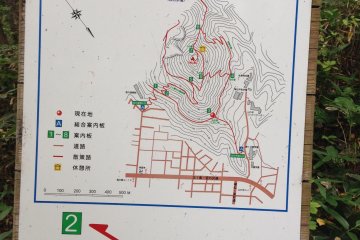 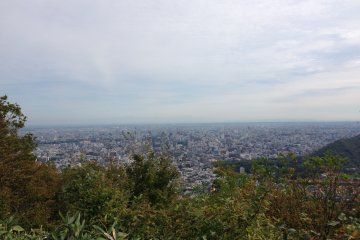 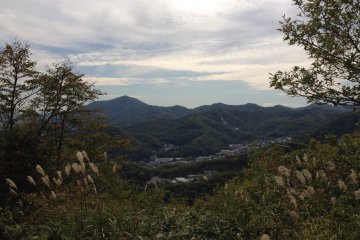