Having spent a number of weeks in the small cities and regions throughout Hokkaido, I thought I’d take advantage of the metropolitan offerings upon my arrival in Sapporo. Japan, both the government and the public-at-large, place a significant value on art. With that in mind, I thought a visit to one of the main art museums in Hokkaido’s most populous cities was in order.

After walking east to west — one end of Odori Park to the other — I continued on until the Governor’s Mansion area where I found the Hokkaido Museum of Modern Art. The area was easily accessible on foot, but if you would prefer to arrive by subway, the nearest station is a five-minute walk away (Tozai Line’s Nishi 18 Chome Station).

There is a distinctly Frank Lloyd Wright feel to the exterior of the building — and the interior spiral staircase leading to the second-floor exhibit bears a striking resemblance to the Guggenheim building. Prior to entering the building, I walked past and viewed a number of fluid art installations. The art is fluid in the sense that it moved via the force of the wind, altering its appearance and form.

My entrance fee was a mere ¥200 and it took about an hour to view the exhibits on display. English information is very limited but isn’t too much of an issue as art is often immune to any linguistic constraints.

The main floor was a celebration of the 110th anniversary of the birth of Hokkaido artist Eien Iwahashi (1903-1999). The displays of his works showed a transition from realism to expressionist displays of nature. In the later years, Iwahashi reverts to a decidedly realistic tone once again. The focus of the works is on the natural world and there is a particularly stunning piece from 1978-1982 that is a panoramic view of the four seasons entitled, “Hokkaido Reminiscence” that is almost 20 meters in length.

After ascending the aforementioned Guggenheim-inspired staircase, one arrives at the Sotoichi Koshiba exhibit. Referred to as the Japanese pioneer of “pâte de Verre,” Koshiba mastered the art of encasing powdered glass in a kiln — a formerly lost art with origins in ancient Mesopotamia and rekindled by the French in the nineteenth century. The exhibit is extensive and covers a significant portion of the upper floor.

The final destination sees striking dichromatic works from Kazohoru Haneda and Picasso-esque creations by Mikako Takahashi, before arriving at an area devoted to sculpture. The focus is on the human form and ranges from the realistic works of Goro Suzuki to the abstract interpretations of Ten-ei Abe.

A visit to any city in Japan offers the opportunity to enjoy wonderful art and more importantly – to view the work of local artists. The Hokkaido Museum of Modern Art is a good first step and introduction into such a world and is just one of a number of museums in the area dedicated to art. 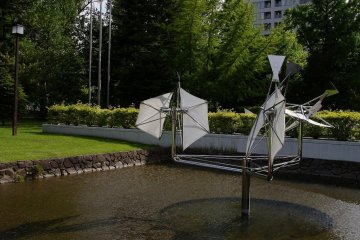 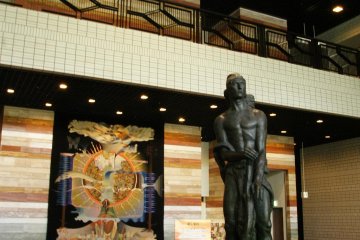 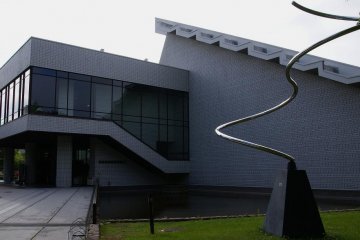