Come face to face with a 19th century icon in Motomachi

Hakodate was opened as an international trading port in 1854 after Japan ended its self imposed period of isolation with the rest of the world. As the result, traders from Russia, China, and the west settled in this city. Motomachi, at the foot of Mount Hakodate become a popular district filled with their residences. Their heritage remains with us today as a testament to their history and endeavours, leaving a beautiful architectural legacy.

When the Russian government established a consulate here, they bought their state religion with them, and the Russian Orthodox Church was consecrated as a chapel in 1859. As the oldest Russian orthodox church at Japan, the Japanese Government designated it as an Important Cultural Property. The locals have nicknamed it it Gangan-dera or Ding-dong temple because of the sound of its bells tolling. The exterior itself was designed in the Russian Byzantine style with an elegant and magnificent atmosphere. Today, it is still operating as a church.

Hakodate is the third largest city in Hokkaido, the northernmost island in Japan and the gateway from Honshu to Hokkaido. I always wanted to ride the ropeway to the top of Mount Hakodate, so I can see the city from the summit. However, it would be even better if I could explore the streets of Motomachi before that. With its various architectural styles, the historical and foreign residences of Motomachi are a photographers’ delight. Taking a walk in the evening in the presence of the Russian Orthodox and the Motomachi Catholic church is a wonderful way to get to know this area.

I wanted to visit Russian Orthodox Church at dusk. When I got off from the tram, I decided to walk around Daisan-zaka, which has been named as one of top 100 best streets in Japan. With its cobbled streets and restored buildings, its elevated position exudes an atmosphere that you won't find elsewhere. The streets are neatly lined with classic lamps, while the autumn breeze and the shade from the trees provide refreshment.

Just above from the church, you will find an ideal spot to take photos of the church with the port of Hakodate in the background. I am so glad that I came at the right time. The sky was not too dark and the lamps had just started to glow. I'm very happy because I could get the photographs that I wanted. 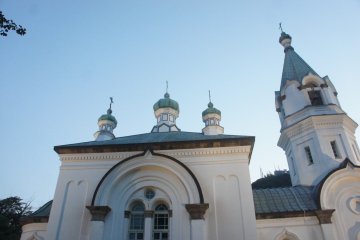 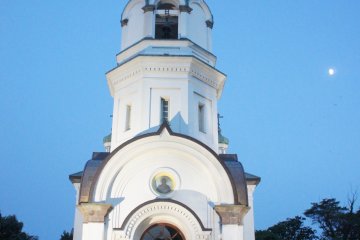 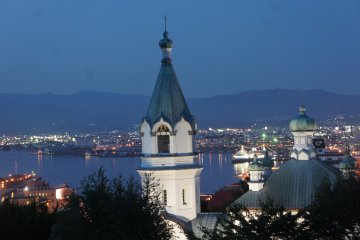 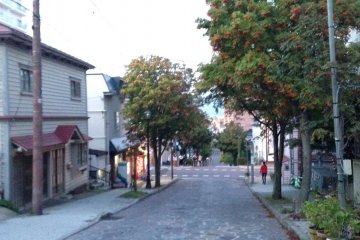 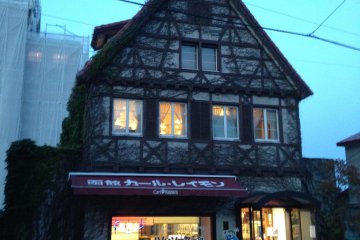