Kobe is a city of lights and the Merikan Park is an iconic place to visit for that. All the buildings are lit up at night and the lights from across the bay glow beautifully. This park is great for maritime enthusiasts as it's host to the Kobe Maritime Museum and provides a perfect spot to watch boats making their way through the harbour. It was destroyed in the 1995 Great Hanshin earthquake and still has a memorial for it on the water's edge.

There are a few neat objects of interest around the place. The giant dancing carp fish outside the Cafe Fish is made out of mesh and glows from the inside at night. There's a large scale replica of a boat engine by the maritime museum, and two large prototype boats that have had some working time on the oceans. One of them is the Hayate, a Techno Super Liner, which is a small scale of a design that's specified to be a next generation high speed cargo vessel, running at over 90km/h with over 1,000 tons. The other is the Yamato 1 which was the first boat with a superconducting electromagnetic propulsion engine to successfully sail the seas. Both boats look futuristic and are displayed with pride.

If you're looking for a romantic place to idle whilst the sun falls and the city of Kobe lights up around you then Meriken Park is perfect. Kobe is a city of lights, and around Meriken Park you can see the illumination of the Maritime Museum, Kobe Port Tower, the Harbourland Ferris Wheel, Oriental Hotel, and off in the distance the arched red Kobe Ohashi Bridge. You'll see a lot of couples around, sitting by the water and watching the boats go in and out. There's a few large ones, including the Kobe Luminous 2 that are lit up with strings of glowing orbs. The area is largely paved, with grass sections, a number of fountains and odd cement statues. There's the occasional tree but this isn't really a garden. It's popular with the local kids and their bikes and skateboards.

The Kobe Port Tower makes for a great observation spot, giving you views over the city and out to the Osaka bay. It has a café at the top and is open from 09:00 – 20:30 (except in winter when it closes at 18:30). Admission is 600 yen for just the tower, and 800 yen for a combination of the tower, Maritime Museum, and Kawasaki Good Times Museum (the commercial Kawasaki bike museum). The mountain-side glows with the shapes of iconic nautical symbols that light up from half an hour before sunset to 11pm.

If you're looking for a place to eat I recommend Cafe Fish!, which has a giant carp out the front. It's a rather up-market café with some delicious grilled Kobe pork, and of course a very complete drinks menu. It's open for dinner in summer and makes for a nice lunch stop, although it doesn't look over the water which seems a bit of a missed opportunity. It's situated at the entrance of the park when you walk from the city. The park is 15 minutes walk from Sannomiya station through the center of the town, so take your time and check out the china town and shopping streets in central Kobe (just don't miss the sunset).

Find out more about Meriken Park.

I'm a journalism and philosophy student from Brisbane, Australia. I like travel photography and getting into the wilder areas to find what nature has to offer. As long as I have my camera in hand and some cash I'm ready to travel. 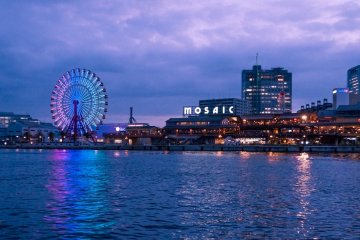 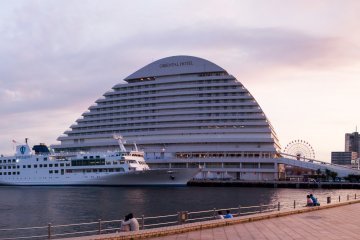 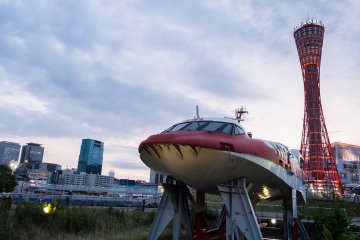