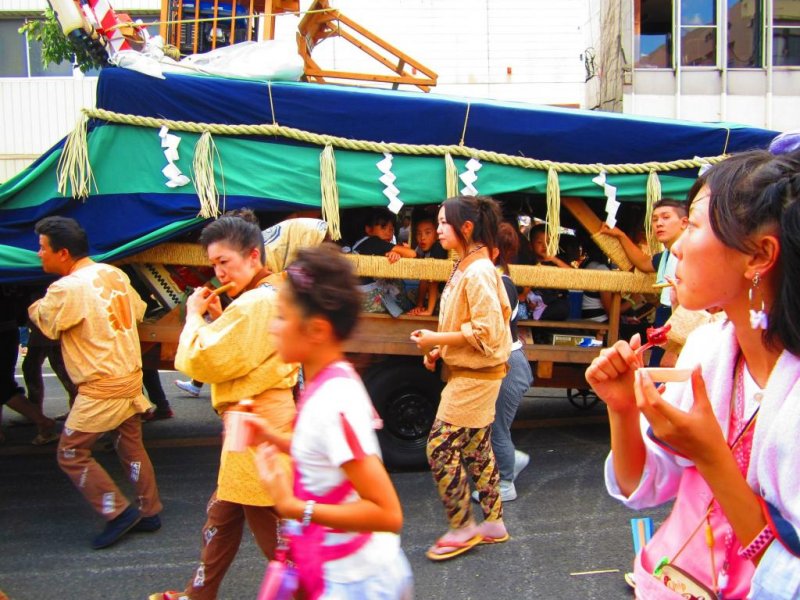 Local color and hundreds of years of history

One of the three biggest festivals in Eastern Japan is held every year during September in the city of Ishioka, Ibaraki Prefecture. Usually spanning the Friday, Saturday and Sunday of a long weekend, the festival fills those three days and nights with revelry and history, celebrating a tradition older than most countries.

I was lucky enough to be offered the chance to attend one day of the festival, and was even more fortunate to have a former local as my guide. Mr. Nakajima kindly took time out of his busy weekend schedule to give us a tour of the city’s historic sites, blending historical facts with personal reminiscences to flesh out the sights, and helped provide an insider’s viewpoint on the festivities.

According to Mr. Nakajima, Ishioka city itself dates back over 1400 years to the Nara period of Japanese history, and was originally the capital of the province of Hitachi under the imperial government of the time. The festival itself has its origins in this provincial government, reaching back 400 years to the early Edo period.

At the time the local governor was appointed from Tokyo and sent out to Ishioka, where the tradition was to make obeisance to all the local Shinto gods in hopes of achieving a prosperous term in office. However, the number of local gods was quite high and the shrines were widely spaced, so to reduce the amount of effort involved one of the governors had all the local gods gathered together and commissioned a communal shrine to be built for them. This shrine, the Hitachi Soshagu, became the focus for the festival. Once a year the gods are celebrated by being transported from the original shrine inside a portable shrine, paraded around the city accompanied with revellers, and housed at one of the 16 city blocks for the duration of the festival.

Each block prepares its own float, a large wooden tower inlaid with brass and colored fabrics, with space for musicians and dancers below. At the very top of the float is that block’s representative statue, beside which a couple locals sit with poles to ward off electrical wires and signs.

In addition to these statue floats each block also has a smaller lion-dance float. Much closer to the ground and shaped like a covered wooden ox-cart, the front of the float is connected to the lion-masked dancer with bi-colored striped fabric. As the dancer writhes and cavorts, imitating the namesake’s power and grace, the back of the car is filled with local children singing and chanting to the music from the floats.

On the second day of the festival the national sport of sumo is performed in front of the Hitachi Soshagu as an offering to the gods, after which the transfer of the gods’ physical form to the portable shrine is conducted. As a holy entity the physical form of the god is forbidden to be looked on by the common man, so it is covered with white fabric and transported only by specially chosen shrine priests. Once the physical form is safely ensconced in the portable shrine it is carried by several dozen specially chosen citizens in the white garb denoting purity. The shrine itself weighs over a ton, and is supported on the backs and shoulders of its bearers by long wooden poles as they chant their way through the streets to that year’s celebrated city block, where it is displayed for worshippers.

As the sky grew darker the lights on the food stalls lining the streets grew brighter, and the already thick crowds expanded innumerably to surround the promenading floats. The smells of castella and okonomiyaki filled the air, the beat of the drums and song of the flute resounded through the body like heartbeat and breath, and the energy of the festival increased. On the floats the traditional dancers played up their roles with masks and colourful costumes, gesturing with fans or the long sleeves of their kimono, young men and women chanted in time as they pulled the floats with long hemp ropes as thick as their own arms, and families trooped past carrying various tasty vendor foods.

Towards the station the lion-dancing floats from earlier in the day had gathered in a row, and thanks to the friends of Mr. Nakajima we were offered the chance to touch the lion masks of the patiently waiting dancers. According to local legend touching the lion masks brings good luck; but better still is to have the lion nibble at your head or arm, ensuring a year of health and prosperity..

Though I had been to other festivals in Japan before, this was the first time I was allowed such an intimate glimpse into one and even had a chance to interact with the culture and history. The Ishioka Festival boasts not only of a long and elaborate tradition, but also the warmth and friendliness of the local population, and is a great way to spend a long weekend. Hope to see you next year!