Take a boat through a beautiful gorge near Hiraizumi

Most people go to Hiraizumi in Iwate for the temples listed as World Heritage Sites. Of course, these are a must-see, but if you are a nature and scenery buff like me, then you can’t go to this area and miss seeing this beautiful gorge (Geibikei), and another one called Genbikei. The names are a bit confusing as they sound very alike—but make no mistake—there are actually two different gorges. So make sure you see both!

Geibikei is east of Hiraizumi and is best accessed by local bus from Hiraizumi station, which takes approximately 30 minutes. Due to this area being quite remote, there are not that many buses per day, and the last bus back to Hiraizumi leaves the gorge around 4pm. As we arrived at the gorge at 3:30pm (after spending all day at the World Heritage Listed temple sites), we caught a taxi from the gorge straight to Ichinoseki bullet train station to catch our train back to Tokyo. The taxi took around 20 minutes and cost 4,000 yen.

To see Geibikei you take a boat down the river through the gorge, which has cliffs as tall as 100m on either side. I am told that in winter they attach a roof to the boat and lay out kotatsu (a heated blanket attached to a low table), so there is no problem of being cold. Autumn is probably the best time to visit, as the gorge is covered in beautiful autumn leaves (we were too early for this, but I saw some pictures and really wished I’d waited a few months before making the trip).

The total boat trip takes about 90 minutes (check out the timetable, as the departure times vary depending on the season), which includes about half an hour where you get out of the boat and walk around a section of the gorge. In this section of the gorge there is a hole in a rock on the other side of the river. You are able to purchase 5 small rock-like things to try to throw into the hole—it’s said to bring you good luck if you get one in! Many people were just picking up rocks off the ground and trying their luck with those, rather than purchasing them! On the return journey in the boat the guide even treats you to some traditional singing!

Find out more about Geibikei Gorge. 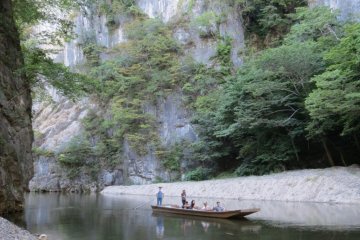 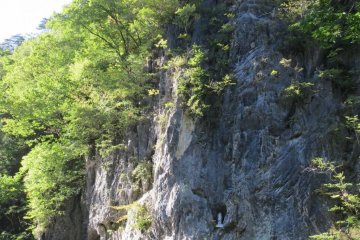 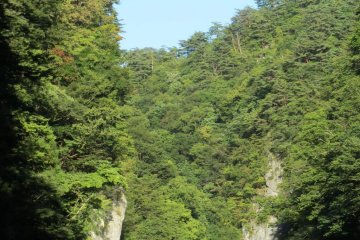 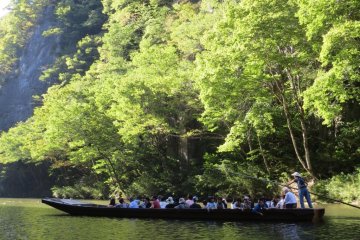 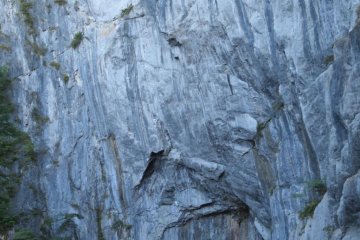