Kamakura Camera - Summer by the Sea 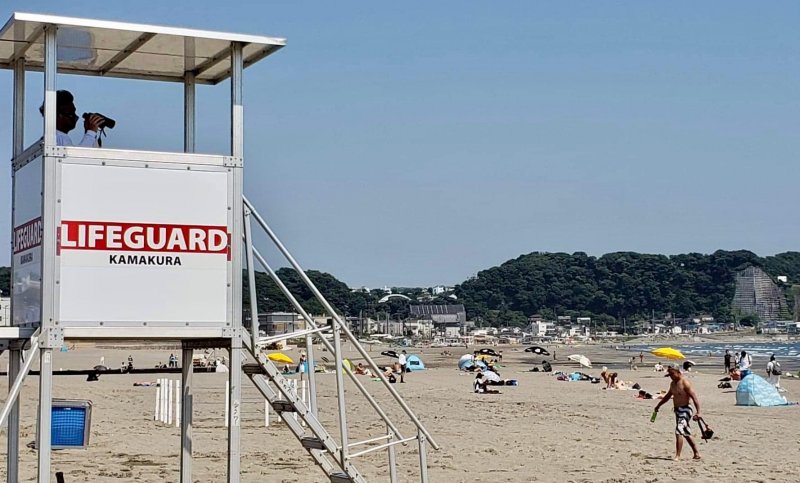 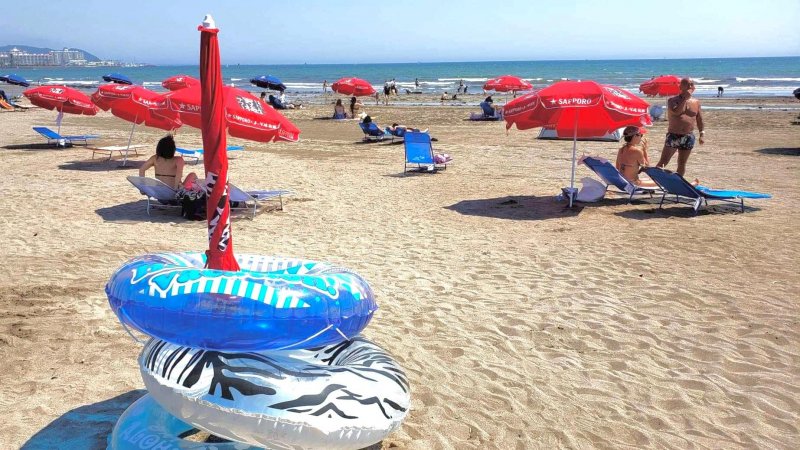 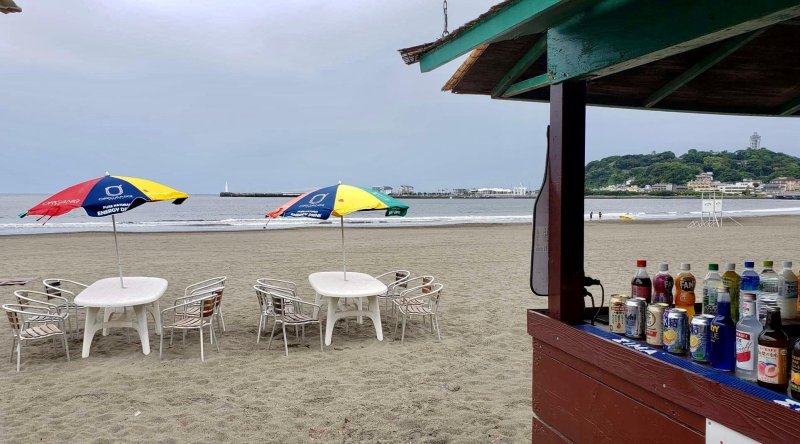 Bar/resto, Koshigoe Beach, with a view of Enoshima Island 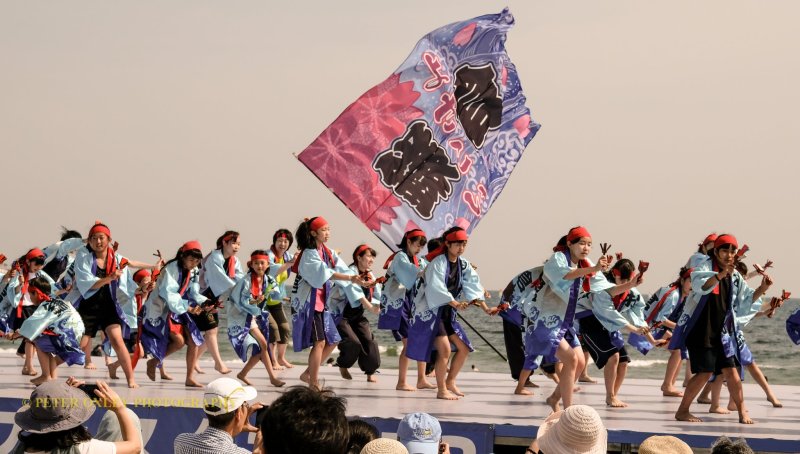 Hawaiian Festival in May 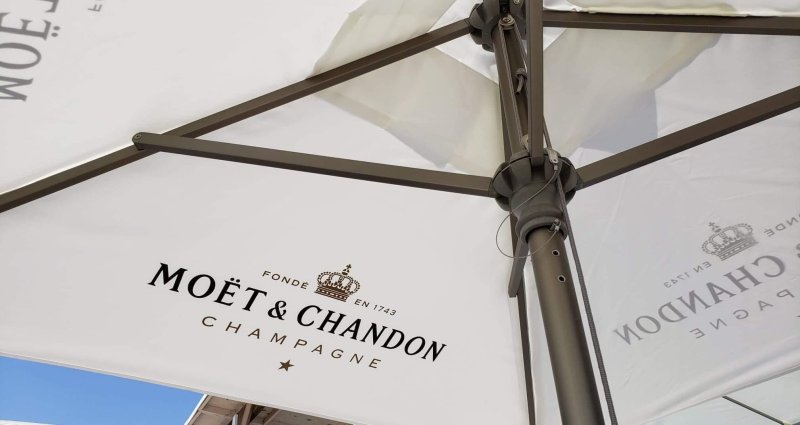 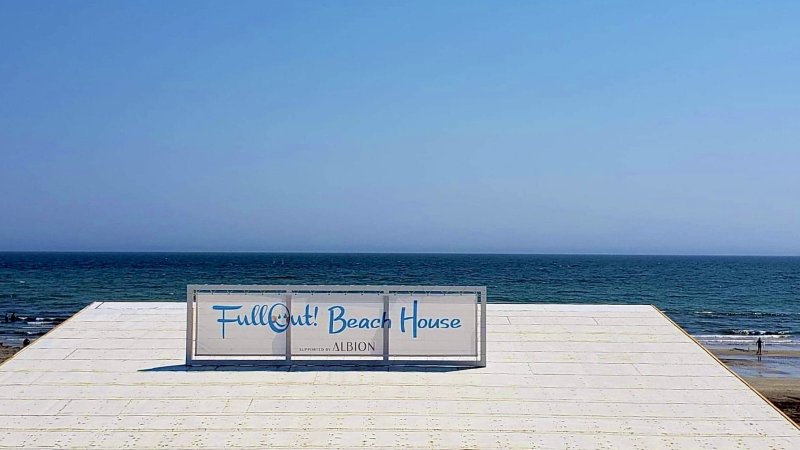 In front of the beach houses, the big blue 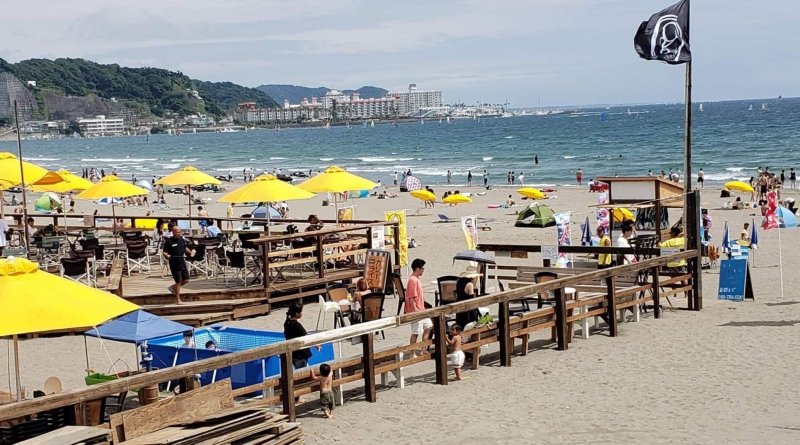 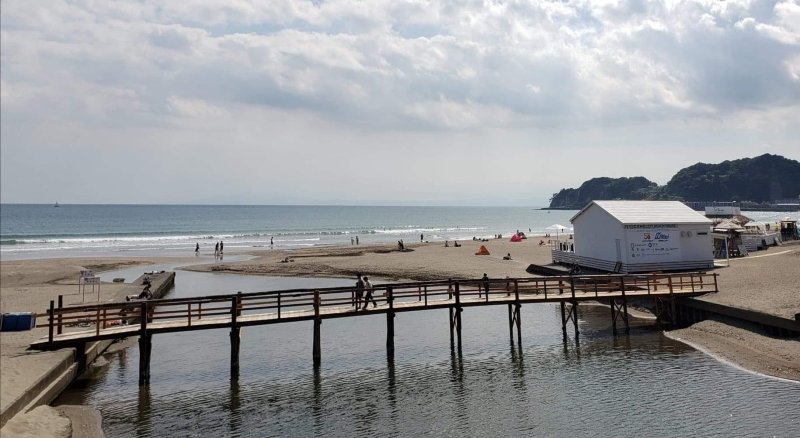 Bridge over the Namerigawa River 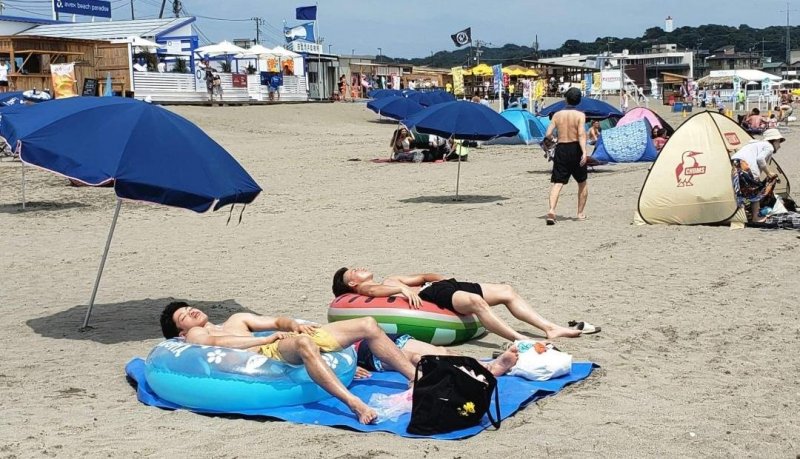 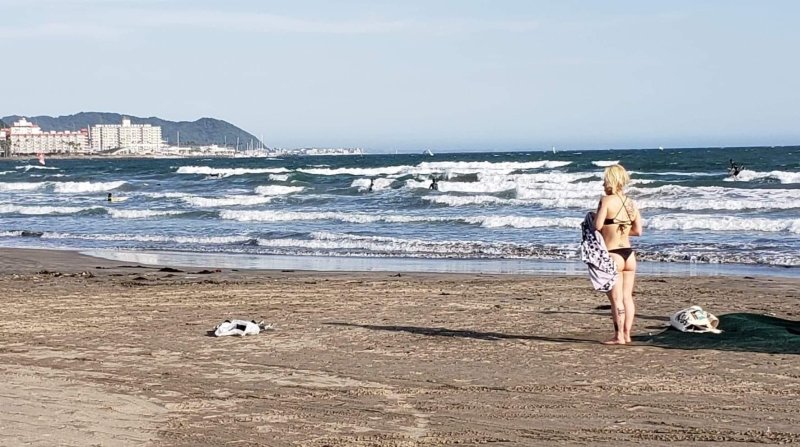 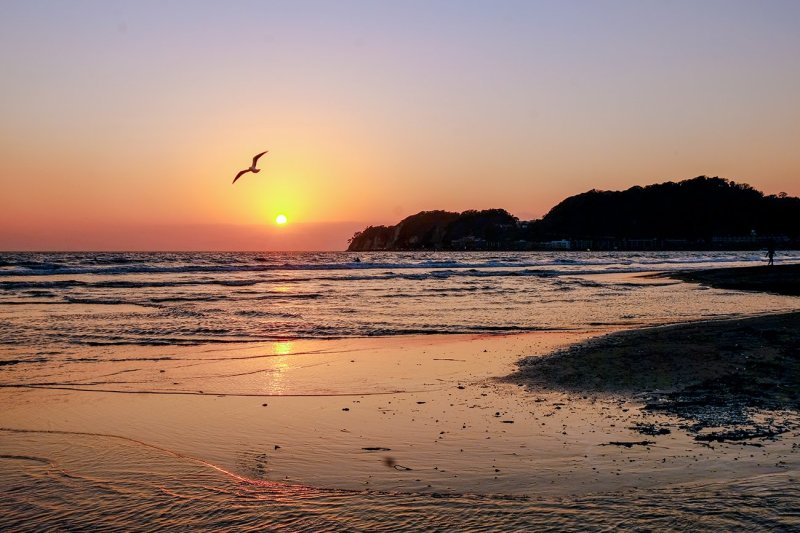 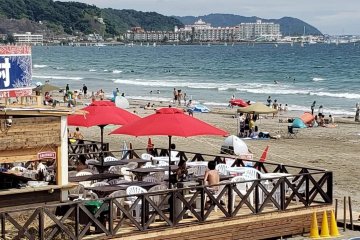 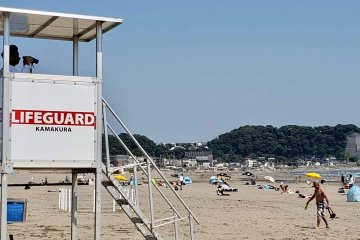 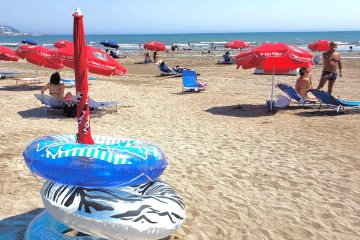 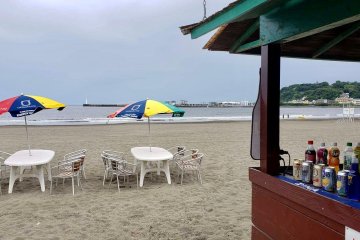 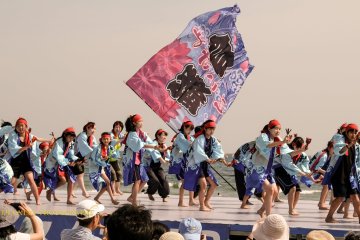 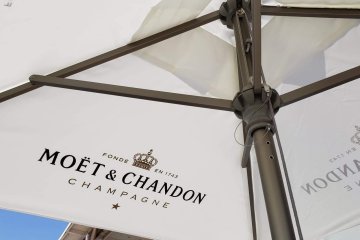 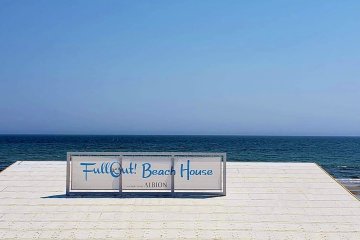 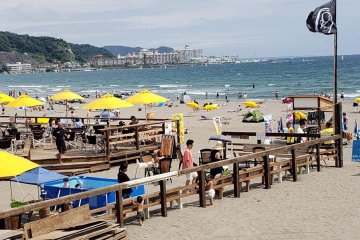 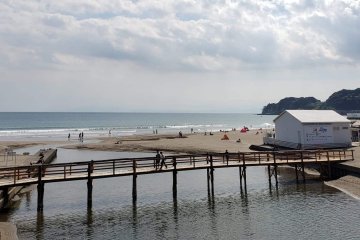 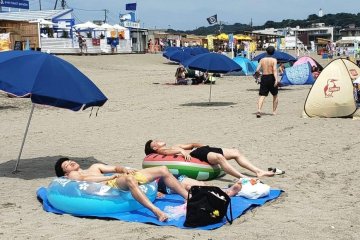 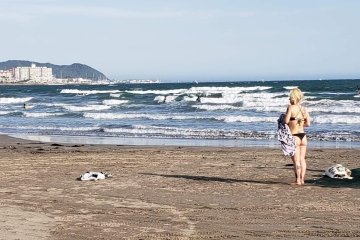 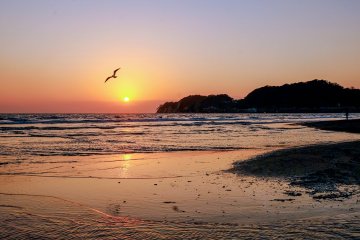 After a hiatus of almost three years, the cafes, bars, and restos are back on Kamakura’s beaches, the first time they have been erected on the site since the summer of 2019. Until the pandemic put a stop to it, aficionados thronged the Kamakura coast every summer to enjoy a fun day out eating, drinking, swimming, sunbathing, and enjoying a whole host of other beach and marine activities.

From July 1 to August 31, summertime in Kamakura draws holidaymakers to its famed beaches where a slew of eating and drinking places sprout up along the shore, offering all sorts of treats for the thirsty and the hungry. Even as early as the Edo Period (1603-1868), Kamakura has been a popular seaside resort destination for both locals and visitors coming from far and wide.

Administered and maintained by the Kanagawa Prefectural Government, Kamakura's 8 km coastline encompasses five beaches: Zaimokuza and Yuigahama, a contiguous stretch of sand separated only by the Namerigawa River; Inamuragasaki Beach located to the west beyond the cape of the same name; Shichirigahama Beach; and Koshigoe Beach, near Enoshima Island, which merges seamlessly with Fujisawa East Beach under the jurisdiction of Fujisawa City.

Only three - Zaimokuza, Yuigahama, and Koshigoe/Fujisawa East - are officially designated as swimming areas. The others have little sand or the fall-off is too steep to be considered safe for swimming, although seasoned surfers pay scant attention to whatever the recommendations are and venture out wherever the waves appear most inviting.

Perfect for Families with Children in Tow

The three sandy beaches are well patrolled, with full-time lifeguards constantly scanning sea and shore during the day. Each beach is perfect for families with children or young toddlers since the waters are shallow, the waves generally calm (depending on the prevailing wind), and the currents mild.

Things You Can Do and Can’t Do

There are plenty of things you can do once you are here. You can rent chairs, Lilos, water-wings, beach umbrellas, snorkeling equipment, mats for sprawling out on, even a tent. Of course, you can always bring your own, as many people do, which will save you quite a bit of money. You can also rent a canoe or a body board or even attend a windsurfing class. There are lockers, showers, and toilet facilities available for a price, but there are also public facilities you can use free of charge.

Be aware that there are many things you can’t do, like smoke (unless you go to one of the designated smoking areas), drink alcohol, light a bonfire, play loud music, or display body tattoos on the beach. If you do have a tattoo, keep it covered, or place a waterproof adhesive plaster over it.

A word of caution: Mind the kites flying overhead when you eat, they've been known to snatch food right out of people's hands!

All Manner of Food and Drink

Drinking alcohol on the beach is a definite no-no, and there are patrolling guards to ensure the rule is strictly observed, but when you want a drink, simply head for one of the 20 or so cafes or taverns (umi-no-ie) lined up along the periphery of the beach. Here you will find all manner of food and drink, from soba, octopus balls, pancakes, yakitori, to sausage-on-a-stick. There’s even Thai and Indian curry and Middle Eastern kebab for those who want something different from standard Japanese fare.

Draft beer is readily available, as are cocktails and mixed drinks. In fact, one place on Koshigoe Beach offers the full works - a tabehodai and nomihodai combined, which means that you can eat and drink as much as you like, within the space of two hours (three days' prior reservation is needed). It also comes with other amenities such as chairs, tables, umbrellas, lockers, and shower facilities, the whole package for the princely sum of about JPY5000 per person.

At the other end of the spectrum, there’s a high-end umi-no-ie on Yuigahama Beach, sponsored by one of the world’s most famous luxury brands, where lounge lizards can sip fine champagne while watching the eye candy, dressed in the latest (and skimpiest) swim and beach wear, glide effortlessly by on the boardwalk outside.

An Important Role in the History of Japan

Given that Kamakura played an important role in Japan's history, it is not surprising that the coastline figured prominently during the shogunate (1185-1333). Kamakura is surrounded by a crescent-shaped range of hills, making the beach the main access point for the shogun and his retinue as well as visiting dignitaries.

For this purpose, a small port was constructed at the far eastern reach of Zaimokuza Beach, and the main thoroughfare, Wakamiya-Oji, was built in 1185 at the order of the first shogun, Minamoto no Yoritomo, as a direct link between the coast and the newly erected Tsurugaoka Hachimangu Shrine, also commissioned by the shogun to serve as the centerpiece of his de facto capital.

In the days of the shogunate, the beach was commonly used by samurai warriors for practicing their equestrian skills in the ancient art of yabusame (archery on horseback). The beach was also the scene of bloody battles in 1180 and 1333 as well as during the Uesugi Zenshu Rebellion of 1416.

A Place for Rest and Relaxation

The beaches of Kamakura came into their own as a place for recreation and taking in the sea air during the Tokugawa Era, once the Tokaido was established as the connecting artery between Edo and Kyoto, and even more so during the Meiji Period after the railroad opened between Tokyo and Yokosuka at the turn of the 20th century.

Today, Kamakura is renowned for its beaches as much as for its temples and shrines, with the numbers of visitors thronging the former surpassing the latter in the summer season. The city is just an hour’s train ride from Tokyo, accounting for the high percentage of day trippers.

Fun Events in the Summer Months

Several events take place on the beach in the summer months. There’s the Kamakura Festival, the Hawaiian Music and Dance Festival in May, the Bon Odori dance event, the seaborne mikoshi matsuri, the annual rough-water swimfest, and the spectacular fireworks extravaganza launched from barges anchored off Sugami Bay at the end of July.

In other words, there's something for everybody in this culturally rich, colorful, and beautiful town. Come and enjoy it this summer!