The castle-like station inspired by a famous tale

Enoshima is a famous island getaway destination from Tokyo, famous for its Sea Candle Lighthouse and Samuel Cocking Garden's colorful winter illumination. Located in the city of Fujisawa on the coast of Kanagawa Prefecture, Enoshima is an easy one-hour train ride from Shinjuku Station making it one of the most convenient day trips out of Tokyo.

The attractions of Enoshima start right at the recently renovated Katase Enoshima train station. At the end of the platform, just before reaching the gates, a mesmerizing jellyfish tank gives a glimpse of what can be seen at nearby Enoshima Aquarium, located only a few minutes away. If you didn't have plans to check some sea creatures, the jellyfish's elegant ballet might do a job in convincing you.

Once you leave the station and see the building from the outside, you come across an extravagant castle-like facade. An amazing sight, Katase Enoshima Station was designed to evoke Ryugujo (the Dragon Palace) an opulent castle in the Urashima Taro folktale.

The most common version of this tale tells the story of a fisherman who rescued a turtle from being tortured by a group of children. As a token of appreciation, the animal takes him on its back to the Dragon Palace, a magnificent location under the sea. Here, he is welcomed by Otohime, a beautiful princess who offers him banquets, good sake and entertaining performances.

A seemingly good deal, the fisherman spends several days at the palace but decides to return home after thinking about his poor parents. Otohime offers him a refined lacquered box as a souvenir and advises him to never open it. He is taken on the turtle's back to his village but upon returning, discovers that he has been gone for hundreds of years. Puzzled, and hoping to find an answer, the fisherman opens the box and ends up turning into an old man.

Chosen by the Ministry of Transport as one of the top 100 Stations in the Kanto area in 1999, Katase Enoshima Station originally opened in 1929 and even then, its style was Ryugujo-inspired with many references to the sea. Its modernization process began in 2018 and was completed in July 2020. With Enoshima having been selected as one of the Olympic venues for Tokyo 2020, the station's concourse design expanded by 25 percent, making it easier for crowds of visitors to circulate during major events.

The new design makes its sea reference even more sumptuous, and features curved roofing and structures that resemble Zuishinmon Gate at Enoshima Shrine. The vibrant red painting evokes the Okinawan style while intricate sculptures of dolphins, turtles and even dragons, which are commonly associated with the sea in Japanese mythology, abound.

Beautiful during the day and at night with its night time illumination, Katase Enoshima Station evokes a dream-like ambience, making a visit here almost like being enveloped in a fairy tale.

From Shinjuku Station, in Tokyo, it takes about 70 minutes to reach Katase Enoshima Station on the Odakyu Enoshima Line. 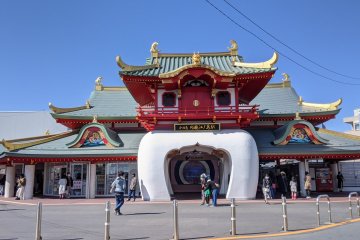 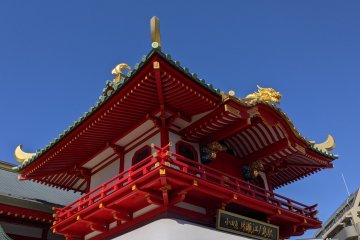 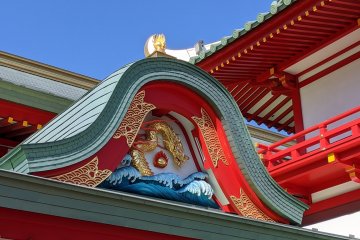 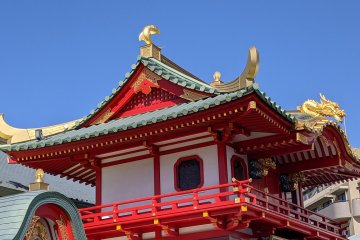 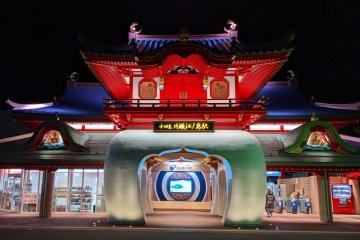 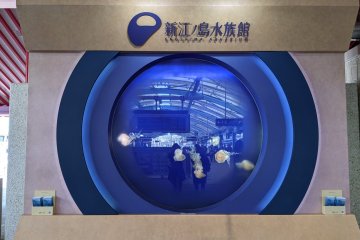 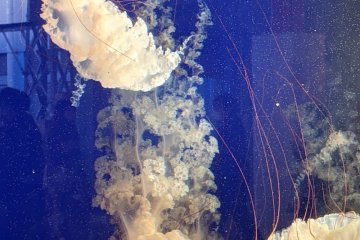