From its beautiful ocean views to its classic temples and shrines, Enoshima Island is a visitor's paradise. But like many who visit, I feel the belly is often king, and Enoshima is royally served with a plethora of palate-pleasing treats.

While the tiny and pleasantly salty young sardine known as shirasu is the local delight, and the tako senbei octopus cracker is a snack marvel that uses the entire octopus, I can't help but be drawn to rice cakes. I love them. Give them to me roasted, dunked in sesame or soybean flour, or dipped in soy sauce, I can't resist the chance to nibble on mochi.

Heading out from Enoshima station on my way towards the island, I soon come across a food truck specialising in what they call kushi mochi, or skewered mochi. My eyes will light up. For real.

The signature dish of the Manpuku Kushi Mochi rice cake truck is its absolutely delicious miso-flavoured mochi. At only 200 yen, this skewered mochi is a delightful bargain. Japan's earthy flavours don't stop though, as they also offer kinako soybean flour-flavoured mochi and a black sesame flavoured one too. At a paltry 230 yen and 250 yen respectively, you are not going to break the budget trying one.

All of the kushi mochi are roasted to order. After your order, wait a couple of minutes for the proprietor to do his job. When he serves them to you, smile. You will be in heaven. Warm and firm yet soft and chewy, kushi mochi may not be the reason you visit Enoshima but it may very well be the reason you stay... just that little bit longer.

On weekdays, Manpuku Kushi Mochi food truck is a short stroll from Enoshima Station in front of Subana Hall. On weekends and public holidays, the truck will be found further on by the entrance to the island itself next to Enoshima Island Spa. 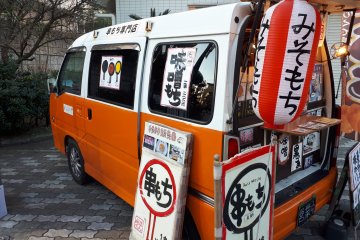 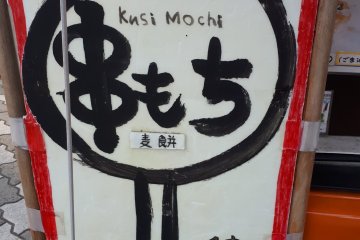 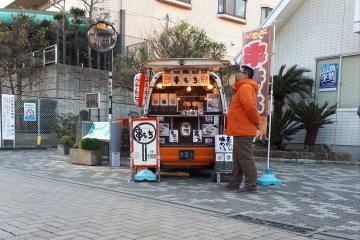