Praying Before the Goddess of Mercy

A short visit to Kannon-sama of Hasedera in Kamakura

It is quite embarrassing to admit that despite the fact that I have lived in Kanagawa for almost twenty years, I had never been to Hasedera Temple in Kamakura -- until last week. While it is almost obligatory to visit Hachiman Shrine, Daibutsu, and the temples and gardens in Kita-kamakura, I have always taken Hasedera for granted; I thought, it was a just a run-of-the mill tourist spot. I was completely wrong. Although I had had a glimpse of its pink hydrangeas from the train one rainy June, I had never gone through the gates of this 1,300 year old holy ground to marvel at its beauty and meditate before the 11-headed Kannon, the Goddess of Mercy.

The other day, I had a reason to visit the venerable temple. My wife and I wanted to go and pray before the merciful deity to seek blessings and guidance for our daughter. To avoid the hordes of visitors on the weekends, we decided to go on a Wednesday.

Hasedera of Kamakura is three hundred meters away (about a ten-minute walk) from Hase Station (the third stop from Kamakura Station) on the Enoden Line. There wasn't much traffic.

Right after paying the 400-yen entrance fee, I was immediately greeted by a little pond of lotus and a school of colorful carps; in the background, the cicadas were singing with abandon. It was not so humid; there was even a cool breeze.

Walking up the hill to Kannon-do, the main hall of the temple, I couldn't help but feel grateful for the privilege of being in the midst of lush greenery under the burning heat of August. With bowed heads and closed eyes, my wife and I stood before the gilded 9.18 meter wooden generous Buddhist goddess. She has a vase of lotus blossoms in her left hand and sits on the petals of a lotus blossom. In silence, we said our wishes and prayers. Photography is not allowed in this hall.

Behind the Kannon Museum, there is a path that leads you to the top of the hill. If the weather is fine, you can behold a breath-taking view of the ocean. We did. In the distance, sailboats were already preparing for the 2020 Olympics. There were hundreds of sunbathers and colorful parasols on the beach.

The temple has a restaurant called Kaikoan that serves traditional sweets and snacks. Sitting by the window, my wife and I took time sipping our coffee and nibbling our sweets. The sea view was totally rejuvenating.

Across the restaurant, flanked by a bamboo grove is the Rinzo Hall; here, there is a rotating rinzo, a wheelhouse where the Buddhist sutras are kept. Every month, the octagonal structure is rotated on the 18th day for eighteen times. Each rotation, I heard, could earn you a good merit just like when you read the sutra.

One thing I discovered in this temple is the existence of a small shrine called Kakigara Inari. Hasedera is mainly a Buddhist temple but it also co-exists with a tiny Shinto shrine. And enshrined in this little corner is a piece of oyster shell (kakigara). According to the legend, Tokudo Shonin, the founder of Hasedera, using a huge piece of camphor wood, sculpted two images of the Kannon in 721. The first image became the Kannon in Hasedera Temple in Nara; the second image Tokudo threw into the sea and it eventually washed up on the shores of Miura. The huge statue drifted for some years covered in oyster shells until the local inhabitants discovered it. To protect and preserve the sacred sculpture, a temple was built in Kamakura. It became Hasedera. And as a gesture of gratitude and reverence for the oyster shells that had protected the wooden goddess from decay, a Kakigara Inari shrine was built. Now, in this petite shrine, for a donation of 300 yen, you can get a polished oyster shell and use it to write a wish or a prayer, hang it up just like a wooden ema tablet around the shrine, and wait for your request to be granted. My wife and I did it.

Returning to the garden, by the pond, I spotted a red dragonfly. She was immovable, seemingly enjoying the singing cicadas. Lingering for two hours in the temple ground was a great relief and consolation while enduring the summer heat.

Hasedera of Kamakura is three hundred meters away from Hase Station on the Enoden Line.

Find out more about Hasedera Temple. 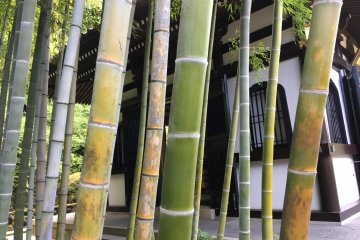 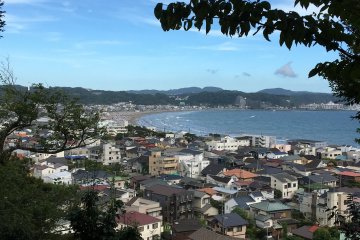 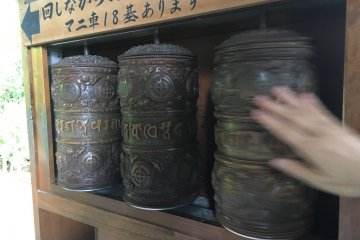 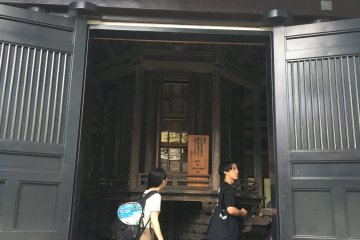 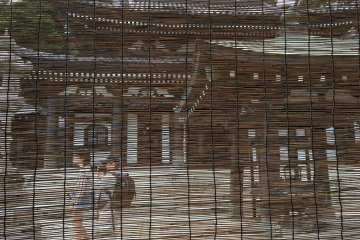 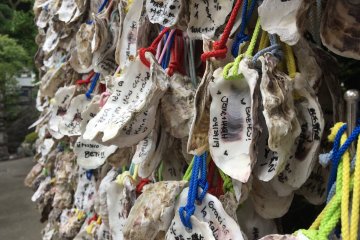 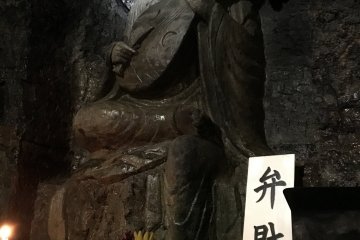 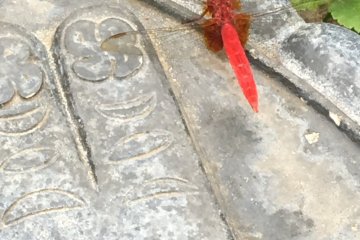 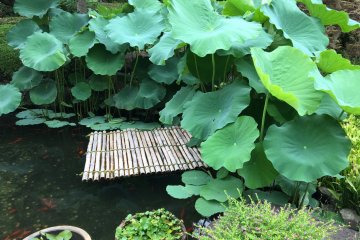 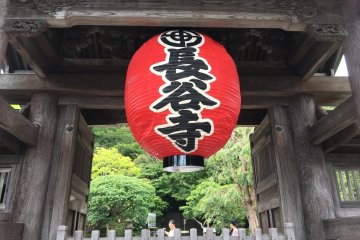