It is part of Japanese culinary folklore to try the noodles at the train station. The idea is that you turn up at a stand-up yatai on the platform, try the regional specialty, and then move on. Preferably in under 15 minutes. Fukuoka is famous for Hakata Ramen, and the people of Nagoya love their Kishimen. If you had a Japan Rail pass, you could try Hakata Ramen in the morning and Nagoya Kishimen in the afternoon. In Kyoto, however, there isn’t a Nishin soba stand on the platform. So where do Kyoto folk go for the best authentic ramen and soba that is full of natural flavor?

On top of Kyoto Station, the tenth floor of the Isetan Department Store building is entirely dedicated to ramen. Called Kyoto Ramen Koji or Ramen Street, it is all about polished decor and franchised brands, with no street wise obasans dishing out fast food. If you can’t find Ramen Koji, or actually prefer soba, then stay with me on the street next to the Kintetsu and JR Kyoto Hachijo-guchi exits south of the railway station, and step inside Aoi Soba Place, an eatery whose name is without flourish, one that represents the simple comfort food it serves.

It is 11 o’clock on a sunny Tuesday morning, and already the crowds are trickling in. It is not just older people who are eating early, but travelers and mothers as well. Despite its proximity to the Shinkansen bullet train station, this is a place that is yet to be discovered by foreign tourists, unlike the Irish Pub a bit further from the train station. At the same time, the hundreds of eateries here mean that it can easily digest the crowds that arrive by train or bus every minute. Like most restaurants at Kyoto Station, Aoi Soba Place has English menus as well as life sized plastic food displays, scoring 9 out of 10 for accessibility. However, you might end up walking past this place a few times before finding it in the Miyakomichi restaurant arcade/ shopping mall, as it does not have an English sign, probably to give a look of an authentic Japanese Inn. So look for the Japanese character 葵, meaning Aoi.

The dark wooden decor at this eatery is reminiscent of a traditional Japanese inn, but with smart undecorated square chairs and tables that are in keeping with its simple name. Unfortunately for larger people, the seating is a bit tight. It is as if some cost accountant was trying to squeeze in a chair too many in this compact space, so it is best to avoid the rush of office workers lunching between 12 and 1 pm.

I had the Mibuna soba topped with a generous portion of lightly boiled Mibuna greens, a vegetable native to Kyoto which reminds me of spinach and mustard. The broth was light and translucent. It was as natural as drinking the water after you have used it to boil rapeseed or broccoli. Actually, the shop also serves soba yu, which is the water used after boiling soba. I prefer the vegetable broth, as the taste was subtle and you can tell you are taking in nature’s goodness. The best restaurants use Kyoto spring water instead of tap water, and if you have tried both, you can definitely taste the difference. Some luxury hotels in Kyoto even use spring water for their showers. It was just right for a light lunch (900 yen), though if you are famished; upgrade to a set meal for just 980 yen.

My sister had the Nanba Chicken set meal (980 yen), consisting of a bowl of soba bathed in a clear broth and topped with spring onions and mibuna vegetables, accompanied with pickles sprinkled with sesame seeds and a bowl of rice lightly flavored with mushrooms and slices of succulent chicken thigh filets, all showcasing local Kyoto produce.

The Kyoto Yuba soba (1,280 yen) is a popular choice with the locals. Yuba is tofu skin and looks a bit like wrinkled paper, but it definitely does not taste like cardboard. Handmade Yuba is amazingly creamy and light. In ancient times this super food was shaped over a hot pot on simmering coals, and remains to this day a labor of love. With a slightly nutty taste reminiscent of gingko nut, it is an acquired taste, but aficionados swear by it, not just for its silky delicate texture, but also for its health qualities. Full of calcium, iron, isoflavones, phytoestrogen and potassium, it actively reduces the probability of cancer. For those who are not so adventurous, the fried yuba soba rolls is a more mainstream alternative, which are like miniature spring rolls.

Other dishes on this menu include Moon-viewing soba, Grilled Eggplant, Tanuki Udon and kitsune soba, named after the fox who loved sweet tofu, as well as the hamo pike conger, a monster of an eel that has been a Kyoto delicacy for many years.

Each dish can be ordered with either Udon or Soba. Soba was traditionally a favorite with the Tokyo folk, though these days it is garnering a fan base in Kyoto as well. So this two way bet by the store ensures that everyone is happy. With the soba, you can also have it served chilled as Zarusoba, served in a low bamboo basket and accompanied with a dipping soup and shredded dried nori seaweed.

The drink list is extensive for a small eatery, starting at 350 yen for Oolong Tea or Coca Cola, while the Kirin Ichiban Shibori draft beer is from 480 yen. The sake list is like a tour of the rice fields of rural Japan, with names like Tosa Crane dry sake from Kochi (550 yen), the Auspicious Sea of​ Clouds from Miyazaki (580 yen), the Four Seasons of Gozan (630 yen), and the Tsukasa special brewed sake from Shiga (730 yen). For those wanting something stronger, they also serve wheat shochu, a distilled spirit similar to scotch, such as the “Star of the West” from Oita, a snip at just 450 yen. The Black Scorpion from Kagoshima, on the other hand leaves you in no doubt of its potency (680 yen). 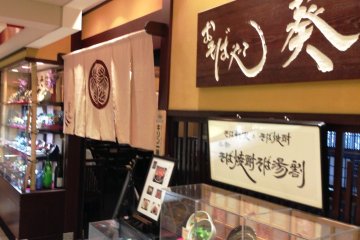 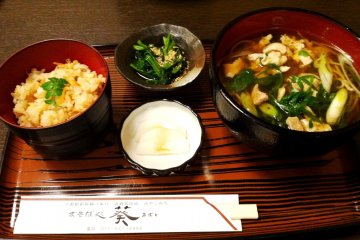 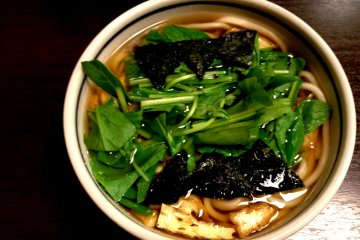 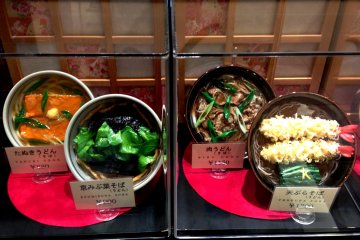 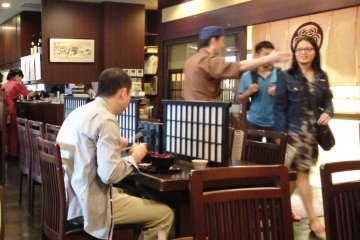