Anglophile​s can fall in love all over again at Hotel Monterey Kyoto​. From the gentlemen club like atmosphere of the library cafe, to the heavy framed masterpieces in the reception, it is like the hotel is reliving its Windsor Castle fairy tales, but slightly less overwhelming and more intimate and boutique in scale.

The proximity of Hotel Monterey to the central business district of Kyoto makes it attractive to business travelers, but don’t let that put you off if you are sightseeing, as people with stern black business suits are few and far between. While it is true that the adage “close to everywhere means that it is equally far from anywhere”, being about halfway between the master potters of Asahido Gallery on Sannenzaka and the bamboo groves of Arashiyama, and also halfway between the Aeon Mall at Muko and Haru Cooking Class, it is very close Karasuma Oike, where Kyoto's two subway lines intersect, making it easy to get anywhere within thirty minutes. It is at least a 10 minute walk to the bus stop, however, so my recommendation is that you buy a subway/bus pass for the days you want to travel more than 10 minutes from the hotel. A taxi is also a good option for short distances or groups of 2 to 4 people traveling together, with both Kohno and Mr Doi’s guided taxi/ private car service offering insightful personalized tours. You might even meet Mr Clinton. A good place to go by bus or taxi is Tsuraya Yoshinobu for traditional Wagashi confectionery, though you may find the sweets too beautiful to eat! Another option is to hire a bicycle, which their concierge desk will assist you with details.

If instead you wish to relax at the hotel and give public transport a miss, the excellent French restaurant Escale (Lunch from 3,500 yen) and the Spa Trinite (1750 yen admission) on the top floor is well worthwhile, using natural spring water tapped from 1,000 meters below ground. The Library Cafe is a pleasant spot for a cup of tea waiting meeting or waiting for your friends, their sandwiches being consistent though a touch under whelming. A short walk from the hotel will take you to a number of hidden treasures, such as the Tin Toy & Doll Museum, the International Manga Museum as well as the Japanese/European fusion Iyemon Salon Café, a good alternative if you wish to skip the 2,500 yen buffet breakfast at the hotel.

A little further is the Nishiki Markets, the character filled furniture district at Ebisugawa, as well as a delightful Rakushikan Washi emporium, home to a National Living Treasure.

The British and Japanese cultures had a long history of intersecting each other in Kyoto. From Kamisaka Sekka’s first trip to Glasgow to study the Arts and Crafts Movement, to his Rinpa styled posters for cruise ships in the early twenty-first century, Kyoto’s elite and forward thinking artisans have looked to the other island on the edge of the Eurasian landmass for inspiration and comparison, much of which is showcased in the Hosomi Museum.

While there are just over 300 rooms over 12 floors, the feeling is more of intimacy than intimidation. Each floor has a security card activated entrance next to the lift lobby, and there is complementary Wi-Fi throughout the hotel, a pleasant surprise amongst hotels of this caliber. A complementary English newspaper is also provided, which goes some way towards compensating the limited number of English TV channels (BBC being the exception). The rooms overlooking Karasuma Street have a view of the offices nearby and the Higashiyama mountains and forests further afield, however if you open the windows there may be some traffic noise from Kyoto City's main arterial road.

There are a number of banquet and function rooms in the hotel. When I was in the Kensington banquet room, I had to pinch myself to remind me that I am not longer in Buckingham Palace in London. Of course, if you would like to get married like an English princess, be swept away by the courtyard Chapel St. Simon Zelotes that is a faithful replica of its namesake in Upper Chelsea in London, with its stone walls and stained glass windows that bring peace and a sense of occasion in any season. So despite its recent arrival in the Kyoto accommodation scene in 2007, it has a much older, understated feel.​

After staying awhile at the Hotel Monterey I can see that some of the decorations have a distinctly Rinpa feel. From the framed pictures of slightly abstract flowers, stylized and larger than life, they give a traditional yet timeless grace to the hotel corridors and guest rooms. It is like you are taking a slice of Kyoto with you when you sleep.

Tariffs for this mid-range hotel can be up to 30,000 yen a room; however discounts of up to 50% are available for early bookings. Just click the "book now" hotel service bell button icon on the top right of this article for more details. 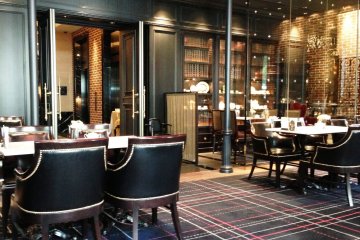 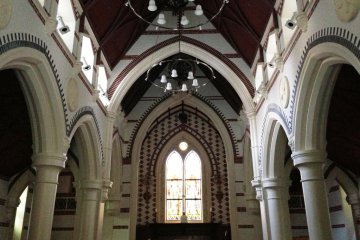 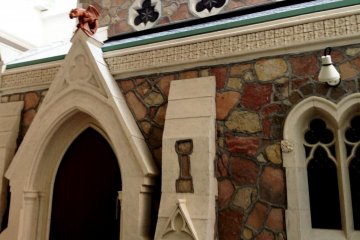 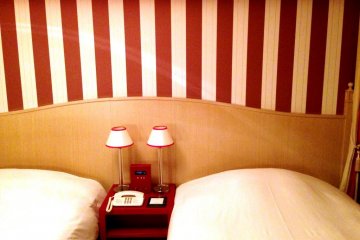 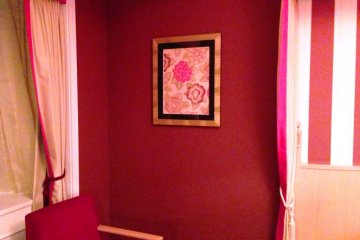 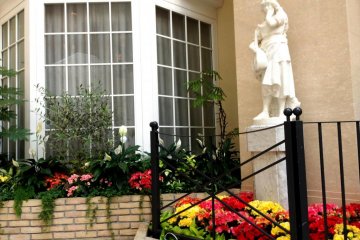 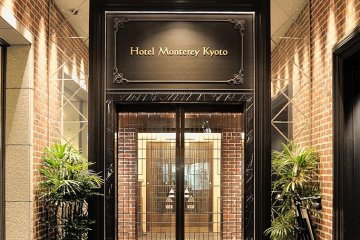