A tale of loyalty and betrayal

What drove Akechi Mitsuhide to betray his Daimyo, the Lord Oda Nobunaga? Loyalty or Principle? Vengence or Ambition? The answer to this question is subject to speculation to this very day. Was it a revenge for the murder of his mother? Perhaps Oda could have seen it coming. In 1556 when Akechi Mitsuhide’s friend Saito Yoshitatsu rebelled against his father, Akechi did nothing to stop him.

Akechi Mitsuhide was the General most commonly associated with Fukuchiyama Castle, having reconstructed the castle in 1580. Imagine that you are Akechi Mitsuhide for a moment. The town is all below you. You have mountains on three sides for protection, while the Yura river formed a natural moat on the other side. Worrying about attacks, you had loose rocks embedded in the keep in a way that it would fall on attackers if they try to climb it. Despite the luxury of having the whole city serving you, Akechi and his family must had a gut wrenching time in the period before that moment of truth.

So in June 1582, Akechi Mitsuhide turned his troops on lord Oda Nobunaga at Honnoji Temple in Kyoto, but only to lose his life 13 days after his reign as a shogun. The story does not end there. His daughter Gracia was baptised in defiance of the Daimyo’s ban on Christianity and was held hostage at Osaka Castle, dying when it was set on fire. It is said that Gracia’s heroism was the inspiration behind the decision to build what is now the oldest Catholic church in Miyazu, as well as an opera whose fans included Marie Antoinette. In James Clavel’s novel Shogun, the character of Mariko Buntarou was based on Gracia.

Fukuchiyama is one of the few towns where the landscape is largely unchanged since medieval times. The castle sits on top of a hill, overlooking the city and using thousands of stones to make the most of its natural defensive capability. The silhouette of the castle against the setting sun can be likened to a reclining dragon, hence its nickname as a reclining dragon castle. To an attacking army, the castle is a formidable sight. Even now with the cool breeze of spring behind my back, it does take some effort to ascend the gentle winding walkway that they have built for visitors. Imagine having the weight of armor and weaponry on your back, and trying to climb the wall while fearing for your life. 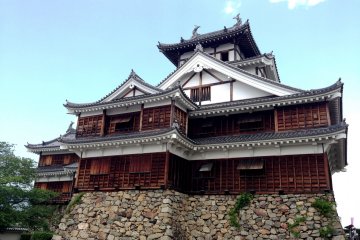 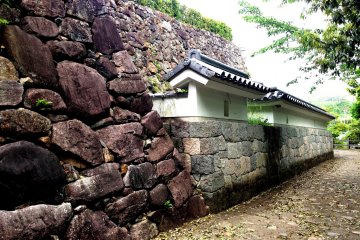 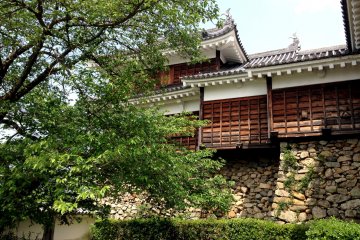