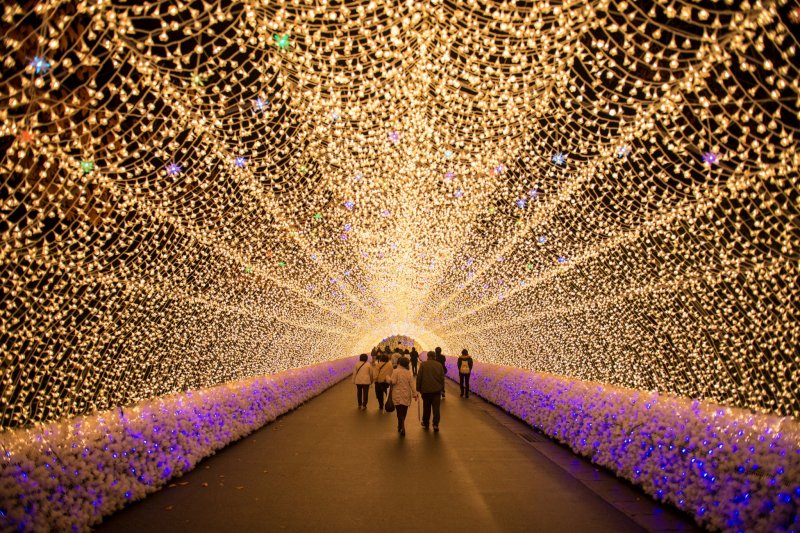 Gardens of flowers and light

Imagine this – one of Japan's finest and most famed winter illuminations with over 5.8 million LEDs, lighting up the darkness of a chilly winter night, creating romantic images of mountains, oceans, flowers, shapes and figures among immense flower gardens, along with open-air hot spring foot baths and spas, fine restaurants and shops.

That’s the scene at Nabana No Sato, a family-oriented theme park abundant in facilities and beauty located in Kuwana City, next to Nagoya. The dazzling display happens every winter!

Regular illuminated attractions include the walk-through Tunnel of Light, very popular with romantically linked couples, the Cloud of Lights, and every year one, of the major flower garden areas is transferred into a fairyland-like dazzling display. Previous themes include "Nature", "Waterfalls", "Aurora" and "Flowers".

Winter visitors will want to rug up well, as Nagashima can become very cold, with the occasional snowfall not out of the ordinary. In fact, snowfall could well be a welcome bonus, as the light-reflecting speckles of snow would accentuate the beauty of the park.

On a chilly winter’s night, it won’t be the cold that gives you goosebumps, but the amazing illuminated spectacle before you. With the flick of a switch, the night becomes an oasis of light.

What is Nabana no Sato?

Nabana No Sato is one of Mie Prefecture's best known tourist attractions, with visitors flocking to the gardens all year round. The park has some relaxing outdoor hot spring foot baths free for visitors to enjoy, as well as French, Italian, Chinese and Japanese restaurants and traditional shops set up around the picturesque central lake. There's an observatory, Fuji Island, which takes you 45 meters off the ground and offers a 360 degree view of the park.

Entry to Nabana No Sato could be perceived as being a little expensive at 1,500 yen per person and 2000 yen during the popular winter months. However, the entry fee includes 1,000 yen worth of vouchers which can be used at the restaurants and most of the other facilities, effectively lowering admission by 1,000 yen.

Nabana no Sato in photos

Despite the fine facilities which include a large onsen with views of the flowers, the flowers and light shows remain the main draw. The grounds are divided into various sections dedicated to many different flowers and trees. The Begoinia Garden alone boasts over 12,000 varieties of flowers in bloom year round. The giant greenhouse features potted blooms of the Andes Flower Garden and Begonia Garden while the traditional Japanese Garden is another popular spot.

Weekends, popular with young couples, old couples and families, can get particularly crowded, so weekday visits are recommended.

Spring provides admirers of flowers with cherry blossom and spring flowers, and a walk around the 8,000 square meters of gardens helps to shake off the remaining winter blues. Summer draws visitors for the hydrangea displays in particular, and also tulips and dalias. Naturally the Beer Garden and Beer Hall have their fair share of fans too, with a special local brew, Nagashima Beer Garden, on sale among others. At the end of the warmer months, the scenery changes yet again as the surrounding trees take on the hues of autumn while late blooming flowers add to the warm-hued landscape.

Nabana No Sato can be reached in 50 minutes by using the JR or Kintetsu Line from Tsu Station, or in 30 minutes from Nagoya Station. From Nagashima Station, there is a shuttle bus for the illumination event for 220 yen per person. Taxi service is also available for 970 yen for one way from Nagashima Station.