On a clear, cool day, you can hear the screams for miles as the feared Steel Dragon swoops down from the skies, twisting and turning at high speed, sending Men, women and children in all directions. Nothing can escape the clutches of this roaring beast!

The Steel Dragon by the way has nothing to do with Godzilla or his ilk, in fact its one of the world’s biggest and most exciting roller coasters, and is found in Nagashima Spa Land, a major amusement park, water park and spa on the southern tip of the small island of Nagashima facing the bay in Mie Prefecture.

Operating since 1966, The park features 10 roller coasters, two of which hold world records, over 40 rides and attractions including the 83 meter diameter giant Ferris wheel, the Aurora Wheel, so named for it’s colorful night lighting, and the Water Park which currently holds the World Record for the most water slides in the one facility! Water Park boasts ten pools and 18 kinds of waterslides. The entire facility features 17 Thrill & Speed rides, 10 Enjoy & Fantasy rides, 18 Kids Town attractions, 23 restaurants, cafes and shops and more all packed into an area of just 1.2 square kilometers.

Steel Dragon 2000 is one of just three gigacoasters world wide. Its the world’s second tallest coaster at 97 meters, and the longest with a track of 2,478.99 meters. Construction cost over US $50 million, due mostly to the extra steel required for quake proofing, which caused the manufacturer to go out of business. Appropriately launched in 2000, the Year Of The Dragon, Steel Dragon 2000 will make you scream as it hits a peak speed of 153 Km/ hour during a thrilling three minute 12 second ride!!

The words “Awesome”,…and maybe even “Dude!” come to mind when facing another of Nagashima Spa Land’s top coasters, the White Cyclone. It is one impressive structure!

White Cyclone, standing 42 meters high and boasting a 39 meter drop, is the world’s fourth largest wooden roller coaster at 1,700 meters in length. Built in 1995, the ride is thrilling enough to warrant a restriction to patrons over the height of 135 centimeters, and under the age of 54! Using enough Alaskan timber to construct nearly a thousand homes, White Cyclone reaches 102 Km/ hour during two and a half minutes of spiraling terror. Terror especially for taller riders, as rushing into all the girder work makes you feel as though you’re going to get your head knocked off by a cross beam.

Nearby the Nagashima Spa Land are three major hotels, Hotel Hanamizuki, Garden Hotel Olive, and the Hotel Nagashima, all offering special rate packages for patrons, including arrangements for nearby attractions such as the flower park, Nabana No Sato.

Nagashima Spa Land, on the island of Nagashima. They should have something of a warning written on the maps, something like, “Here there be Dragons”!

Find out more about Nagashima Resort. 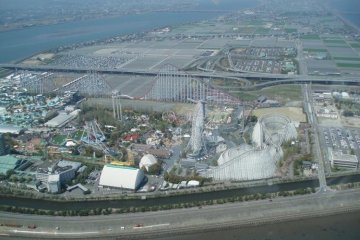 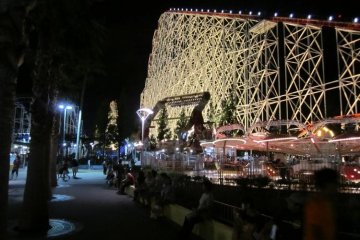 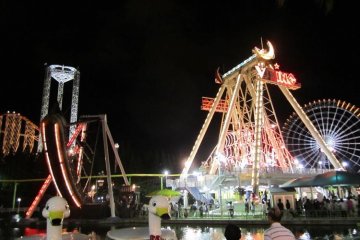 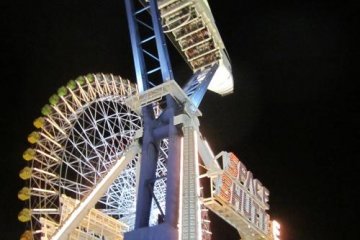 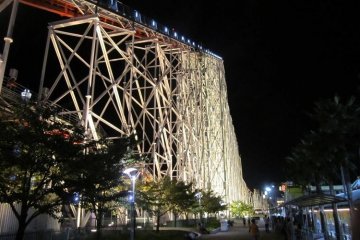 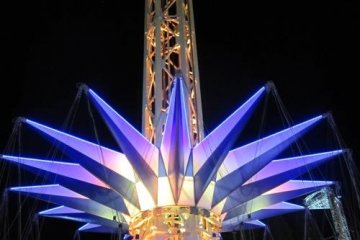