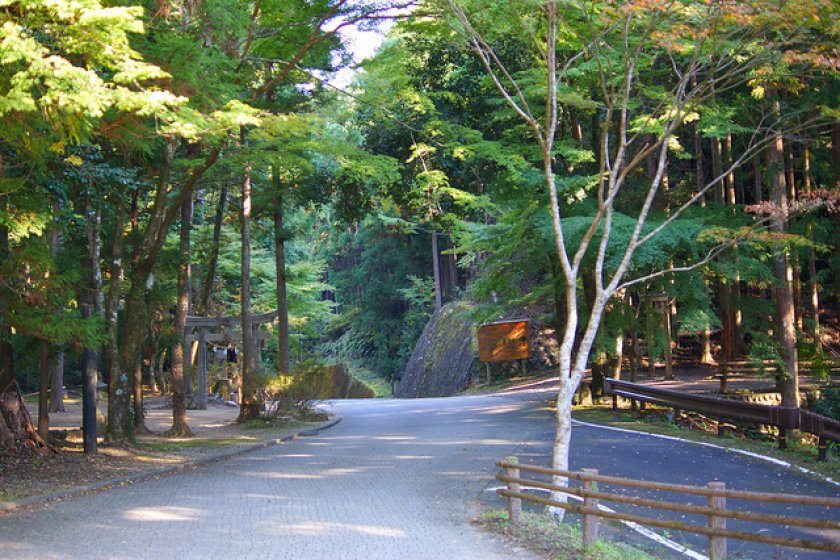 There's something special about the Old Kumano Road.

There remains a mystical aura along the Old Kumano Road as it winds it way through ancient forests and mountains south from the historical and cultural Ise Jingu, Japan most revered Shrine towards the Three sacred Sites, the traditional homes of the gods, the Kumano Hongu Taisha, the Kumano Nachi Taisha and the Kumano Hayatama Taisha.

The Kumano Kodo (old road), was designated a World Heritage site in 2004 and is one of the world’s great pilgrimage routes dating back at least to the early Heian period (Eighth Century) but possibly even longer. Pilgrims of all walks of life, members of the Imperial family and noblemen, samurai, craftsmen, farmers, merchants, and the warrior-like mountain ascetics, the Yamabushi would make the route to pray and cleanse their souls in the Kii mountain wilderness between the main shrine at Ise and the three sacred sites.

The ancient route along Mie Prefecture's Kii Peninsula was partially paved with large flat stones to ease the walking of the thousands of pilgrims and to reduce erosion along the path. The amount of stonework involved, and the fact it was all painstakingly dug out before being carefully laid is amazing. Although it is rarely used now you may still come across modern day pilgrims dressed in traditional loose fitting white kimono like attire, complete with a conical straw hat and tall walking stick, or one of the few true remaining Yamabushi making their rounds of the Great Shrines. Modern day pilgrims, or ghosts from the past? It's hard to tell. Parts of the road retain an eerie quality about them as they quietly meander through the thick vegetation, and darkened by the thick overhead canopy of giant trees, but for the whole, you can feel the history and wonder of nature while wandering the moss covered flagstones amongst pristine primeval forest, streams and waterfalls. You'll soon find yourself in a Zen like state from the exertion and fresh mountain air.

Stone Buddhist Jizo statues line the route, as do many small shrines and temples. Shrines are usually related to the Shinto religion, while temples belong to the various Buddhist sects, however, when the Kumano road was established, the two were often amalgamated, meaning that the small shrines cater to both Buddhist and Shinto gods. It wasn't until many hundreds of years later that the two religions were separated. Apart from the small temples and shrines dotting the route, rest stops and inns for the weary traveler can also be found. Add to that, some areas have Onsen hot springs, perfect for washing away those traveling aches and pains, particularly in the colder months.

Most people these days make the walk along selected short segments of the 300 kilometer route. A good starting point might be from the Grand Shrine at Ise, working your way south towards Kumano. Another popular route is the Magose-Toge route, between Miyama-Cho and Owase city. Two kilometers of moss covered stone path through a fern covered cypress forest lead to Tengura-San a huge rock providing spectacular views of Owase and Magose Koen park, famed for it's cherry blossoms.

Either way, within minutes of starting you'll notice a time slip like effect as the modern world melts away and you find yourself in a Japan of the history books. This region, being somewhat isolated, and sandwiched between the mountains and the ocean has remained relatively untouched through the centuries.

The view changes with the seasons, and although winter can be bitingly cold, there is usually very little snowfall experienced in the region. Summer is very hot and humid and sees some of the heaviest rainfall in all of Japan, so it may be best to plan for your pilgrimage during the other seasons.

Choose your route carefully. The Kumado Roads' 300 Kilometers of sometimes difficult terrain through the mountains and valleys can be very strenuous, so unless you're a very fit and experienced hiker / trekker with an interest in obscure religious culture, have plenty of time and a smattering of Japanese language skills, then taking shorter, smoother stretches of the road may be to your liking.

The full trip should take a week or two, but as the traditional route is near train and major roadways, a combination of walking, rail and road travel might suit your schedule better.

Camping is possible along parts of the route, although not officially approved. Trail maps do note camp sites with facilities, however it may be necessary to stay at inns, which can be expensive. A number of detailed website links are listed below for your convenience.

Despite having been designated a World heritage site in 2004, English speakers and information remains sparse, adding to the old world atmosphere. You'll be hiking in steep mountains along rarely used trails. For that reason we would suggest traveling in groups of two or more. It would be wise to carry sufficient food and water, and a mobile phone too. Parts of the trail have numbered signposts with emergency phone numbers every 100 meters. Planning ahead and preparing in advance is recommended. Indeed, while you'll be properly kitted out for hiking and trekking, taking the trail through the rugged wilderness will have you wondering how they did it in the days of kimono and straw sandals.

Unlike many World Heritage sites the world over, the Old Kumano Road is still very much alive, with people living and working along the route just as they have for centuries. The Kumano Kodo is a world heritage site that Mie Prefecture is rightly proud of. Very few westerners have traversed the entire course, and even taking the shortest, easiest section is a rewarding experience.

Chris Glenn is an Australian born radio DJ, TV presenter, helicopter pilot, and advertising copywriter. A follower of samurai culture , he is a member of the Japan Armor and Weapons Research and Preservation Society, has black-belt in Kendo, 2nd black-belt in Chanbara sword fighting disciplines, and currently studies Shinkage and Enmei Ryu techniques. A long term resident of Japan, he is extremely passionate about preserving and promoting Japanese history and culture. 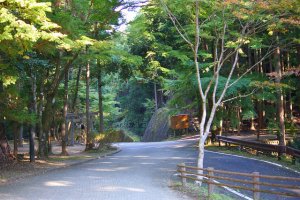 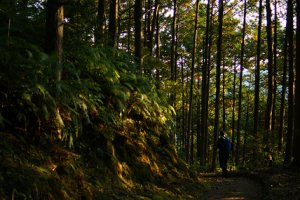 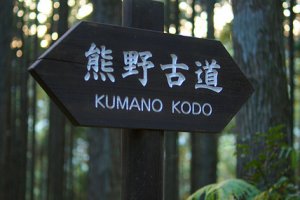