A children's paradise celebrating all that is Anpanman

Children of all ages, well usually up to about junior high school, love Anpanman. Anpan means sweet bean paste, and this manly cartoon superhero demands much attention from across the nation through comic books, television, and even places like rural Kochi Prefecture.

In 2011, the Sendai Anpanman Children's Museum and Mall opened just a ten minute walk from Sendai Station. After a slow start due to opening around the same time as the Great East Japan Earthquake, business is now booming with an at capacity crowd almost every weekend.

The Anpanman Museum and Mall is a large facility catering to children that want to have fun in an Anpanman setting and above all, to their parents that want to take adorable pictures of their children screaming in delight.

The mall part of this two story happy land occupies the first floor. There are nearly a dozen stores all selling Anpanman character goods. You can find fashion, a photography shop, souvenirs, toys, and even a specialty children barbershop. On the far end of the first floor, opposite the front entrance, are several restaurants. You can enjoy noodles, steamed buns, and other snack foods with your favorite character's smiling face. There is also a restaurant that serves family restaurant style meals in the courtyard outside. Prices for food seemed reasonable and not overly inflated.

On the second floor of the building is the ''museum'' floor. Admission is 1000 yen for anyone over the age of one year old. That means a mama, papa, and child will need to pay 3000 yen. Add in lunch, maybe some shopping, and a few hundred yen for the onsite parking (300 yen first hour, 200 yen half hour after that), and you'll be calling Anpanman to help you find out where all your money went. Still, if you have a child or children, it could be an enjoyable way to spend some time together. There are some basic play areas which are mostly just photo opportunities for parents, an art station with classes throughout the day, and a theater which shows Anpanman cartoons. There is also an adult-themed cafe (an absence of Anpanman everywhere) which provides a nice escape for parents.

Throughout the day are performances in the main plaza, the center of the building. These can be watched from the first floor or the second looking down from a balcony. The Anapanman characters and friends do a little dance and the kids go wild. So did I. Perhaps best of all is Uncle Jam's Bakery located outside the front entrance, visible from the street. It sells a variety of tasty baked goods, again in the shape of Anpanman characters. They are on the expensive side, but good for a special treat.

Overall, I enjoyed my visit because I learned more about the Anpanman craze. My idea of this being a fun date idea was dashed by the crowds of children and parents (not fun for her), plus the higher than expected price tag (not fun for me). My recommendation? Visit only the free first floor to see one of the performances, or pick up something from the shopping area or bakery for a fun gift. Follow that plan, and you'll be sure to have some enjoyment on a budget. 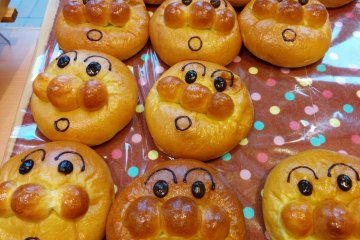 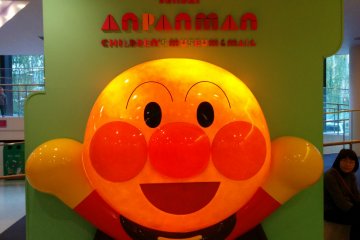