Takoya is a confectionary shop in Sendai, Miyagi Prefecture with an interesting name, a fun history, and a delicious menu of traditional Japanese sweets available for takeout.

A man named Tadayoshi first opened Takoya in 1688 in central Sendai. The sweets shop sold their still popular mochi rice cakes and manju steamed sweet buns to the many townspeople and merchants traversing the busy streets of the ancient castle town. The traditional style Japanese sweets proved a perfect match to accompany the city’s love of tea. The reputation of Takoya sweets became so great that the ruling 4th generation of the Sendai Date Clan, Date Tsunamura (1659-1719), recognized the shop as an official confectionary provider of the Date family. Successive generations and family members expanded the number of shops in Sendai, with even one son briefly operating a shop in Nihonbashi, Tokyo. However, today the only remaining location is this Nagamachi neighborhood shop, which is actually very close to the site of the original shop which relocated to Nagamachi in 1896. A few years later the confectionary shop would debut its most famous product which gained attention nationwide, but before that, we have to address the shop's unusual name.

"Takoya" (蛸屋) directly translates to "Octopus Shop", even though none is sold. It seems even the current owner-operators, one of which is an 11th generation branch family member, isn't 100% sure which of the several theories behind the naming is correct. One possible answer is a bizarre historical reference which suggests that a local ordinance at the time banned confectionary shops from having generic names that sounded like confectionary shops. At the same time, seafood shops could not have typical seafood words in their business name either. Poking fun at the rule, the sweets shop opened with octopus banners out in front and called itself Takoya! Others say the store naming is connected to the neighborhood's "Octopus Temple" Tako Yakushi-do. Travelers would walk the main highway near the temple on their way to the castle town center. In any case, the name stuck and the family operating the business also adopted the last name of Takoya.

The confectionary shop sells a variety of sweets. Step inside and the sweets will seem to almost be popping out of the glass display cases to welcome you, thanks to their dazzling colors and hand-crafted detail. You’ll be tempted by sweet red bean paste daifuku, sesame rice cakes, chestnut sweet buns, warabimochi (bracken starch and covered or dipped in kinako), kintsuba (sweet beans wrapped in flour dough), and limited edition seasonal sweets. However, by far the most famous product is “Zensho Mochi” (全勝餅), or “Complete Victory Mochi”.

Zensho Mochi is a smaller, cute-sized mochi made to cheer on and celebrate the efforts of the Sendai-based 2nd Division of the Japanese Army in their overseas battles during the Russo-Japanese War (1904-1905). As a reminder, Japan won, becoming the first modern example in history of an Asian power overcoming a western counterpart. Inside the mochi is Takoya’s signature handmade red bean paste, which is less sweet than modern mochi filling and has an elegant taste. The chewy, almost fluffy, rice cake is composed of red and white layers—symbolic colors of celebration. The outer surface of the mochi has the character “全”,meaning “complete” ,“all”, or “total” burned into it just enough to give off a golden hue. Lastly, what appears to be powdered sugar or coconut on top is actually rice cake shavings. This authentic treat was awarded a gold medal in the 1917 National Confectionery Exposition (全国菓子博覧会).

Today, the century-old Zensho Mochi is regularly bought before examinations or sports tournaments as a good luck charm, as well to enjoy as is for its delicious taste and gorgeous appearance. Why not take a bite out of history at Takoya? 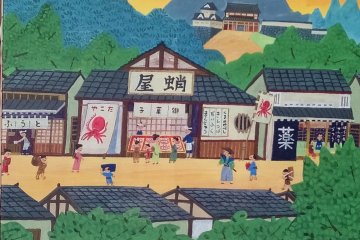 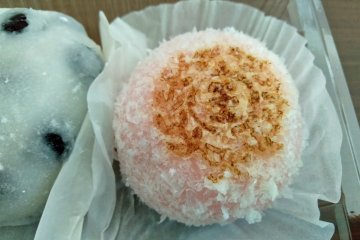 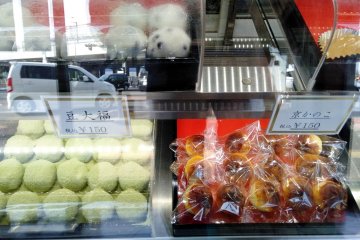 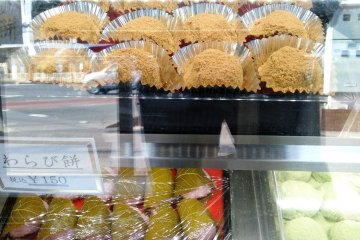 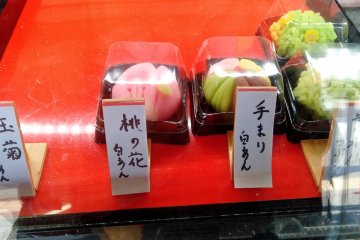 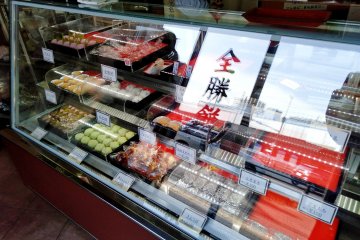 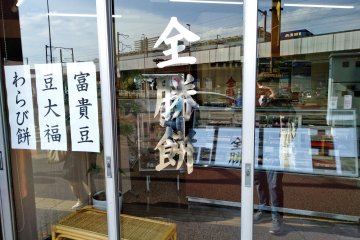 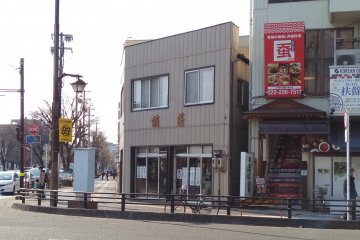