Sex and procreativity in Shinto

This Shinto shrine is located only a very short distance of about 300 meters from the more historically famous Asuka Temple, and thus is often overshadowed in importance. However, as a Shinto shrine, it addresses concerns with this worldliness, and local people come here to pray for marital harmony, lover problems, or in order to be blessed with children.

After passing under the torii gate and climbing up a set of steps, one is transported into a world of fertility and procreativity. Scattered throughout the Shrine grounds are ubuishi, or fertility stones in the shape of male phalli (and some female symbols as well) that have been donated by local people. Many of the stones come from farmers who discovered them while plowing their fields. These stones are considered manifestations of the power of the Shinto deity and thus are thought to have the power to grant children to couples. In this respect, they are similar to the Hindu Siva lingam and yoni stones found in many South Asian and Southeast countries which are objects of veneration. In addition to blessings in childbearing, the shrine is also known for blessings in safe delivery and matchmaking. Basically, the shrine covers all bases in respect to the many aspects of love.

In addition to the fertility stones permanently displayed on the shrine grounds, on the first Sunday of February every year a festival called Onda Matsuri is held, in which is reenacted the process of procreation.  The purpose of this festival is to ensure a bountiful crop in the upcoming agricultural season. There is a stage directly across from the shrine’s main building, and although it is local festival, it was quite crowded the year I observed it, with spectators coming from as far away as Osaka. On the stage, a rice plowing and planting ritual is conducted by a tengu identified by his long, phallic looking nose and a man dressed as a cow pulling the plow. Then they are joined by a man wearing an okame mask, representing a woman. After the mimed intercourse is completed, the tengu man throws a lot of tissue out to the spectators who grab them to carry home for a good harvest or to be blessed with children. There is a lot of bawdy joking and fun time to to be had by everyone.

On the occasion that I observed the festival it coincided with the Setsubun celebrations, so once the Onda Matsuri was completed at the inner Shrine, spectators were entertained with oni (devils) at the entrance to the Shrine. Worth mentioning are the sake containers and cups sold at the Shrine Office just inside the torii -- in the shape of male and female genitalia. 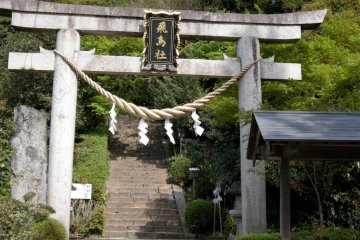 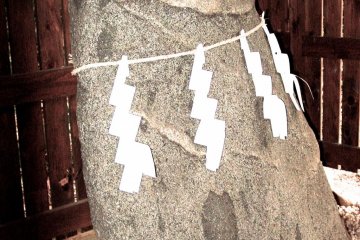 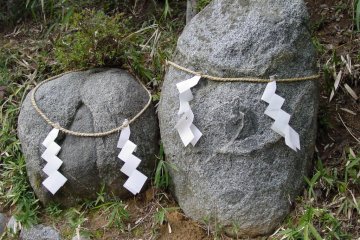 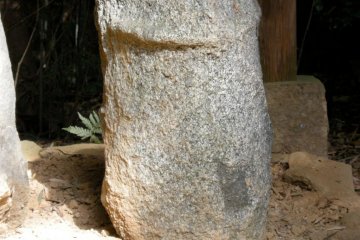 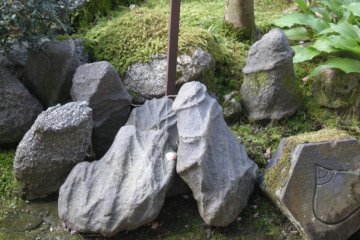