Welcome to a mystical place where Japan’s past and present connect! Kashihara Jingu, a large shrine surrounded by lush forest, enshrines Emperor Jimmu, the legendary first emperor of Japan, and his consort.

According to the oldest history books of Japan, the Kojiki and the Nihon Shoki, Jimmu is a descendant of Sun Goddess Amaterasu and Storm God Susanoo, two deities from the foundation myth of Japan. Jimmu was a worthy descendent of gods indeed. He, his sons and his clan members migrated eastward from Takachiho in Kyushu, via the Seto Inland Sea. They first arrived in Naniwa, now Osaka, but received a hostile reception by the indigenous clans there. Escaping by boat, they sailed down the Western side of to the Kii Peninsula and arrived in Kumano from where they moved north, under the guidance of legendary three-legged crow, Yatagarasu. Along the way, they managed to subdue all other clans and so became strong enough to establish sovereignty and unify the country. The Kashihara Jingu shrine now stands as testimony of this event.

It is a fairly new shrine in Japanese history, as it was only built in 1890 when petitions were made to the then Meiji Emperor to establish a place of worship for the first emperor of Japan. The petition was not only granted but the Meiji Emperor sponsored two buildings from the Kyoto Imperial Palace.

The location chosen for the shrine grounds, however, connects us back to legend. It is believed that the current shrine site was the place where Kashihara Imperial Palace stood and where Jimmu ascended the throne, dated around 660 BC.

To this very day, February 11, is still celebrated as National Foundation Day, when Jimmu established the Japanese imperial line which counts no less than 125 emperors to date (2018).

At the entrance of the Omote Sando (Front Approach) stands one of Japan’s largest torii gates. Made of cypress, it stand almost 10 metres tall. At its top you can see a large wooden plaque that features one of the twelve animals of the Chinese Zodiac. Depending on what year you come to Kashihara, the sign will be different.

From there you stroll down a wide, gravel-stone covered way towards the Minami Shinmon (South Gate). The way is flanked on both sides by countless lanterns with a wooden top, which remind me of miniature shrines. These lanterns are testimony to the support that this shrine receives from worshippers all around the country.

Following the Omote Sando, you will pass through a second torii gate and walk over a bridge by a small creek. Still, there are many more lanterns, including some large stone lanterns.

A large Chozuya, a basin filled with water, awaits you outside of the Minami Shinmon. It is good etiquette to pick up on of the many ladles and follow the purification ritual before entering the shrine.

Other shrine buildings include the Chokushi-kan, a Mansion for Imperial Envoys, the Bunka-den, or Culture Hall, and the Sukei-kaikan, a modern Worshippers Hall. The Treasure Museum is open to all visitors on weekends and holidays, but on weekdays a reservation is required.

The shrine buildings are all made of cypress wood, not lacquered like some other shrines, but left unpainted. The dark wooden pillars and the bark-covered roofs of some of the buildings blend in perfectly with the surrounding forest.

The shrine is located at the base of Mount Unebiyama, one of the Three Mountains of Yamato, considered sacred since ancient times. The spacious shrine grounds are covered by forest which connect seamlessly with the forest on Unebiyama.

Right there is Kashihara Forest Park, a woodland that was actually planted over a hundred years ago. At the time, 150,000 trees across 450 varieties—including oak and camphor trees—were planted around the sanctuary.

Leaving the shrine at the South Gate, you will soon reach Fukada Pond. A stroll along its promenade is especially nice in spring when the cherry trees planted around the lake are in full bloom.

A wooden bridge cuts across part of the pond from where you can enjoy watching wild birds joyfully splashing around in the water. Sit down and have a rest at the vermillion-colored rest station by the lake, right next to a small Inari Shrine complete with the typical row of red torii gates.

If you leave the shrine on the East side, you will soon be surrounded by forest. A stroll along the several trails is very relaxing, as there are not many people around. There are also some open spaces with meadows where you can enjoy sitting down for a while.

If you have time, then you can walk all the way to the Mausoleum of Emperor Jimmu located in the north of the shrine forest. An outer and an inner torii gate and a wooden fence separate you from the inner sanctuary.

If you have a little more time to hand, why not follow the forest trail leading up Mount Unebiyama?

According to the Kojiki and and Nihon Shoki, Emperor Jimmu is believed to have lived to the old age of 127. It is also said that during his reign people lived peacefully and the nation prospered. Overcoming hardship and adversity during his conquest is attributed to good luck and heavenly guidance. In any case, prayers for a long life, good luck and good future feature high on worshippers’ wish list today.

While you can pray yourself at the Gei-Haiden at any time between sunrise and sunset, requests for prayer by a shrine priest on your behalf, called norito or kito, are received from 9am to 4pm, and a donation of yen 5,000 to 10,000 is necessary.

A good time to come for prayer is in the morning. This is a magical experience when the first morning light illuminates the shrine and you can breathe in the fresh morning air while listening to the morning prayer of the priest. There is an evening prayer too. Morning and evening prayers, a ritual for the Shinto kami-sama, are conducted on every day of the year, and you don’t need a reservation. Just get up early and be there!

On New Year’s Day and the days after masses of people line up for hatsumode, the first shrine visit of the year. This is the busiest time of the year for Kashihara Jingu Shrine.

There are also many shrine festivals throughout the year, and some events take place in the Kashihara Forest Park. They include the the Kigen-sai, or National Foundation Day Festival on Feb 11 and the Spring Jimmu-san Festival on April 3. The former celebrates Emperor Jimmu ascending the throne and the latter is a festival in honour of the Emperor.

With the scale and grandeur of shrine and shrine forest on the one hand, and the serenity and solemn atmosphere on the other, remind us of the Meiji Jingu shrine in Tokyo. That is to say: minus the crowds. On a regular day it is very quiet and peaceful and there are only a few visitors and some locals passing through. This is the best time to come and feel the touch of Jimmu’s legend!

Close to Kashiharajingumae Station (2 min on foot) and to the Kashihara Jingu Shrine (10 min on foot), the Oak Hotel is a convenient option for a night’s sleep in Kashihara. Your stay comes with a ‘morning set’ breakfast. In operation since 1982, the facilities in the Western-style guest rooms are standard and clean. Members of staff are very friendly and you won’t break the bank staying here. They are happy to serve single travelers. Their restaurant is open for lunch and dinner, and the cake set at yen 780 is just right after a long walk around the expansive Kashihara Jingu Shrine area. 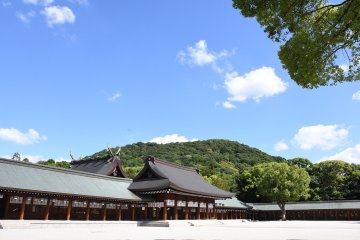 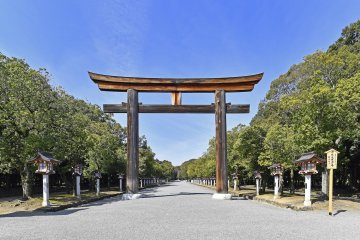 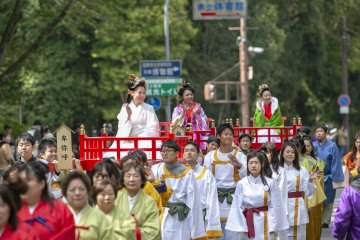 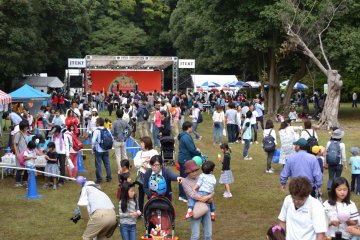 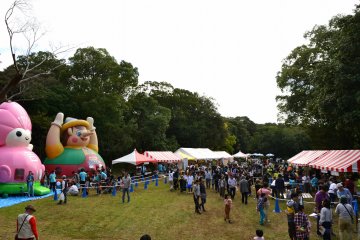 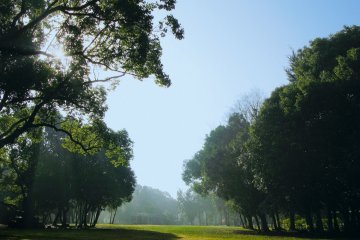 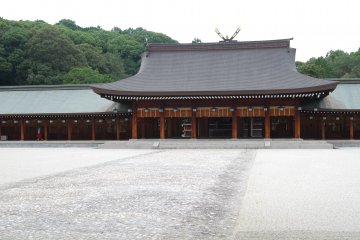 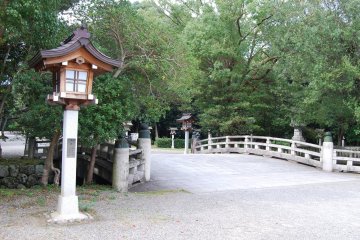 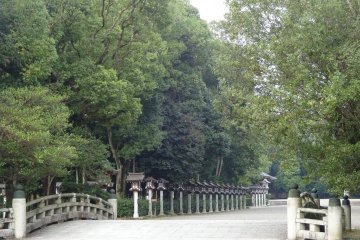 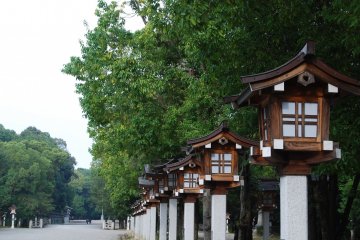 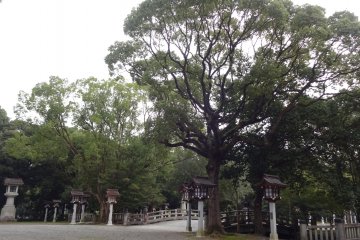 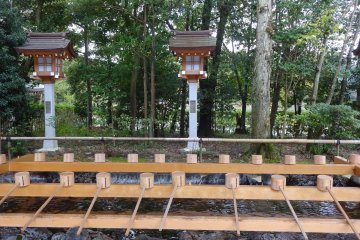 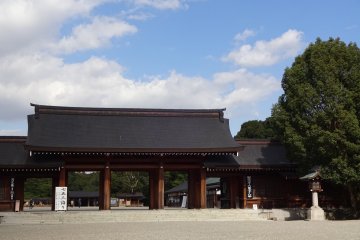 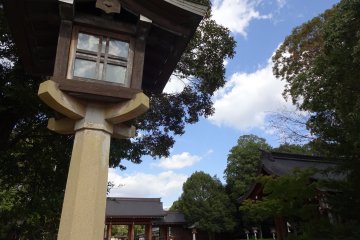 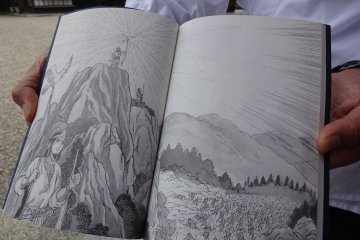 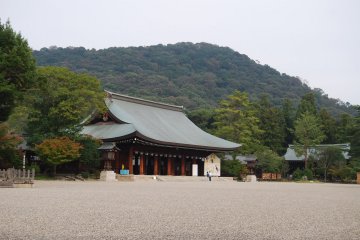 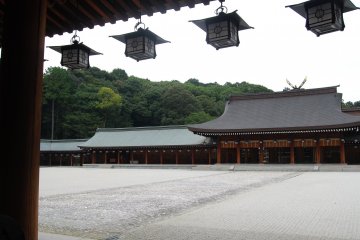 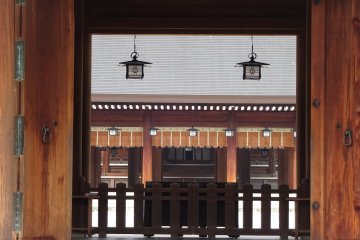 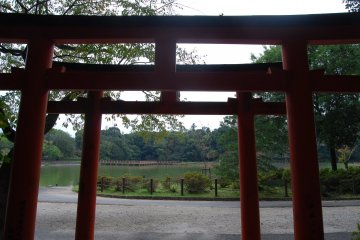 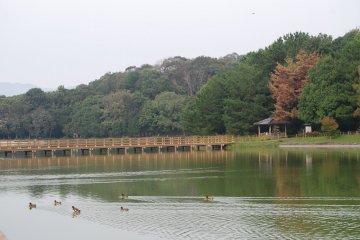 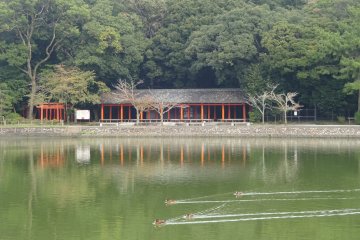 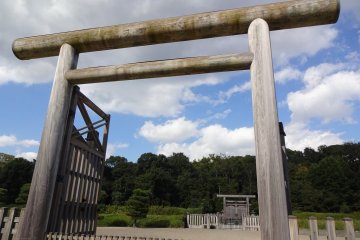 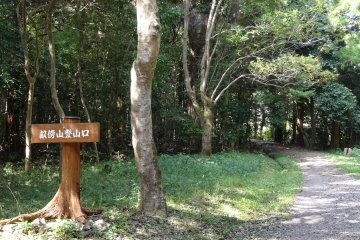