The First Emperor of Japan

The journey of Emperor Jimmu on his conquest of Japan

This last year has seen the stepping down of one Emperor, the ascension of his successor and the ushering in of the new Reiwa Era.

It is an interesting fact that the Japanese Imperial line is the oldest hereditary royal line in the world with evidence dating it back to Emperor Kinmei, the 29th Emperor who died in 571 CE. The evidence is much more limited for the Emperors who ruled before this, and the first ten Emperors are even considered to be legends. So bearing this in mind, who was it that founded this nearly 2,500 year old dynasty?

Descendant of the Gods

The first Emperor is known as Jimmu-Tennō and his reign is said to have been between 660 and 585 BCE. However, he did not receive this title until more than 1000 years later when the practice of naming Emperors after their death began. His recorded name according to the Kojiki and Nihon Shoki, Japan's oldest written histories, is Kamu-Yamato-Iware-Hiko-Hoho-Demi-no-Sumera-Mikoto . His maternal grandfather was Ōwatatsumi god of the sea, and on his fathers side, he was a direct descendant of Amaterasu, goddess of the sun.

He set out from his palace at Takachiho thought to be near the modern city of Hyūga in Miyazaki Prefecture, Kyūshū with the intention to conquer all of the country on behalf of the "Gods of Heaven and the Earth". After leaving Takachiho, he made his way through the Haya-suhi Gate (the more literal translation is Quick Suck Gate on account of the fast currents) otherwise known as the Bungo Channel, between northern Kyūshū and neighboring Shikoku.

He stayed for a time in the area around Fukuoka and Ōita before moving on to establish the Palace of Ye near Hiroshima. Next he came to the land of Kibi, on the border between Hiroshima and Okayama Prefectures where he stayed for about three years in order to prepare and gather supplies.

Finally, he landed in Naniwa, what is now Ōsaka and proceeded east towards Yamato, an ancient name for Nara Prefecture. As they reached Mount Ikoma on the border between Nara and Ōsaka Prefectures, Naga-Sune-Hiko, the ruler of Yamato, gathered all of his forces and engaged the Emperor in battle.

The Imperial forces were soundly defeated, so Emperor Jimmu ordered the retreat. It was his belief that he could not win any battle if he marched toward the east as this would cause insult to his ancestor, the Sun Goddess. So he resolved to make his way around the Kii Peninsular (Osaka, Wakayama and Mie Prefectures) and attack Yamato from the opposite side. With the Sun Goddess at his back, he was sure to be victorious.

They began to march south through Osaka Prefecture, hoping to find another way in to the fertile plains of Yamato. Progress was slowed however as Emperor's brother had been struck in the elbow by an arrow during the battle. It is thought that they stopped for a time in the village of Amami in the far south of Osaka. Here you can find a small and mysterious hillside shrine called Kanii-jinja which is dedicated to Emperor Jimmu and thought by some to be near the location where they made camp.

From Amami, they headed west towards the coast, but the condition of the Emperor's brother continued to deteriorate and he eventually died somewhere in the vicinity of the town of Izumisano. Once they reached the coast, they boarded boats to take them around the tip of the Kii Peninsular and eventually landed in the Kumano region.

Into Wakayama and Mie

This time, some of the gods sent a poisonous mist which put the Emperor and his whole army to sleep. As they slept, the Sun Goddess appeared in a dream to a man named Kumano-no-Takakuraji. She told him of a scared sword that had been hidden within a nearby barn. Takakuraji awoke with a start and found the barn from his dream. Sure enough, sitting on the floor was the sword shown to him by Amaterasu. He brought the sword before the sleeping Emperor which caused him, and his whole army to wake up.

The route from Kumano, through Ise and into Yamato was mostly hidden and quite dangerous. So Amaterasu once again sent her aid; this time in the form of a giant three-legged crow called the Yata-Garasu. This crow carefully guided them through the wild forests and mountains. From time to time, they defeated Yemishi, a term used to describe local barbarians, through either direct battle or trickery or simply through the favour of gods friendly to the Emperor's cause.

Eventually they arrived at the mountains on the far opposite side of Yamato and prepared to do battle once again with Naga-Sune-Hiko and his army. Before the battle, Naga-Sune-Hiko came to the Emperor to find out why he was so determined to conquer the land. It transpired that Naga-Sune-Hiko had pledged allegiance to another Child of the Gods, perhaps a cousin of the Emperor. Jimmu-Tenno asked for proof of this allegiance, so Naga-Sune-Hiko presented him with a single heavenly arrow and quiver.

Jimmu-Tenno knew straight away that they were genuine and showed his own heavenly arrow and quiver to Naga-Sune-Hiko to show that he too was a Child of the Gods. It was too late to stop the impending battle however. Naga-Sune-Hiko was executed and with the Sun Goddess at their back, the forces of Jimmu-Tenno won a resounding victory.

Some six years after setting out from Kyūshū, Emperor Jimmu had finally brought all of Yamato under his control. He stood on a low mountain called Mount Unebi and declared that the land to the south east is the center of the new kingdom where his palace should be built. That area was what is now the town of Kashihara.

Emperor Jimmu's 76 year reign was peaceful with very few events of note. One in particular happened during the 31st year while he was travelling around Yamato surveying his kingdom. He climbed to the top of a hill called Waki-Kamu-no-Hotsuma from where he could see all of the land at once. He exclaimed that it was a beautiful country that resembled a ring, much like a "dragonfly licking its hind quarters", although some accounts more accurately state that it looks like two dragonflies mating, attached at the hindquarters . This gave rise to an ancient classical name for the Japanese islands "Akitsushima" meaning Dragonfly Islands. He died in 585 BCE. at his palace in Kashihara at the ripe old age of 127 (137 according to the Kojiki) and was buried in a tomb at the base of Mount Unebi.

Later, during the Meiji Restoration of the 19th century, Kashihara Jingu shrine was established close to the supposed location of Jimmu-Tenno's palace, as well as his grave and is the largest and most important of the shrines dedicated to the founder of the longest royal family line in the world.

The sources I used for this article are as follows:

Nihongi; Chronicles of Japan from the Earliest Times to A.D. 697 - A translation of the Nihon Shoki by William George Aston, written in 1897

A Translation of the 'Ko-ji-ki', or Records of Ancient Matters - written by Basil Hall Chamberlain in 1882

Various signboards from around Kashihara in Nara Prefecture and speaking with local people both in Kashihara and Amami. 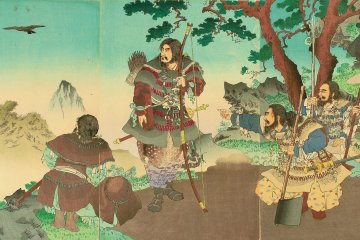 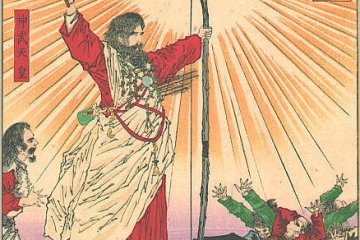 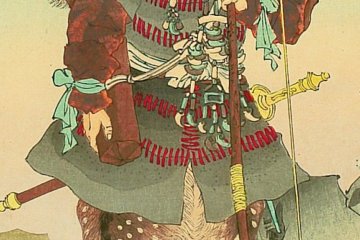 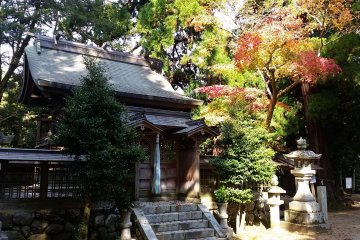 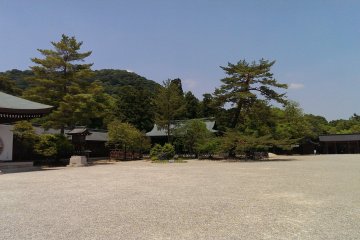 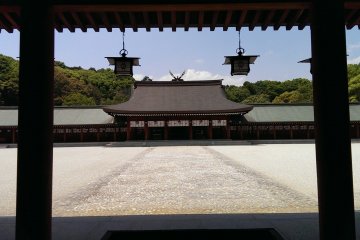 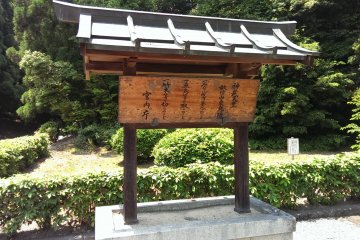 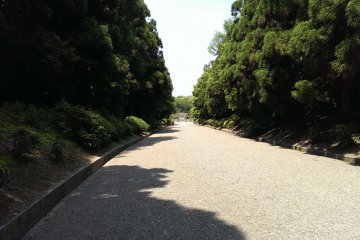 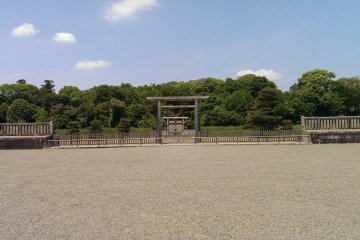