A temple dedicated to healing built by Empress Jito

During the period of construction, Emperor Temmu dies. After his death, Temmu’s wife, the Empress, ascended to the throne and was called Jito. It is during the reign of Empress Jito that construction was completed and the dedication ceremony for enshrining the chief Buddha, Yakushi Nyorai, was held in 697 AD.

The compound was completed in 698. But ten years later the Capital was moved to the North of Nara and Yakushiji was moved to its present location in 718. The complex consists of the Kondo (main hall), Kodo (lecture hall), and the East and West Pagoda representing the resplendent after-life on earth.

Yakushiji was destroyed by fire, wars and natural disasters several times. The most damage occurred during the civil war in 1528. Today only the Yakushiji Triad in the Kondo, the Sho-Kannon in the Toindo and the East Pagoda remain of the original temple.

The Kondo was rebuilt in 1976 to house the Yakushi Triad. The hall was built through the contributions of millions of pilgrims who donated money for the reconstruction. The Kondo replaced a temporary building rebuilt in 1600. The Yakushi-Triad consists of Yakushi Nyorai and two attendant Bodhisattvas. Originally covered with gold leaf, the great fire of 1528 gave the statues their present appearance.

The Yakushi Nyorai (Buddha, Bhaisajyaguru) is a national treasure from the Hakuho period (645-710) and is bronze, with a height 255 cm. The statue was originally cast by order of Emperor Tummu in 680 and completed by Empress Jito in 697. The Buddha is the Buddha of healing and lord of the Emerald Pure Land in the East, who has promised to cure illness of the body and mind. Yakushi Nyorai is worshipped in order to achieve a long life. Although Yakushi Nyorai is depicted with a medicine pot on his left hand, this sculpture does not have it.

Attending the Buddha on is right is Nikko Bosatsu (Bodhisattva, suryaprabha) and on the left is Gakko Bosatsu (Bodhisattva, candraprabha), both national treasures of the Hakuho period, bronze, with a height of 320 cm. Nikko means the sunlight and Gakko means the moonlight. They are impressive because of their twisted bodies, their graceful features and the free flow of their robes. Yakushi Nyorai is the healer of the mind and body and Nikko and Gakko Bosatsu are there in support of the healing process. The pedestal of Yakushi Nyorai is a national treasure, bronze, 150 cm tall.

The design in relief on the pedestal is unique in the combination of various elements with different cultures of the world.The grape-vine scroll pattern at the edge of the upper projecting frame is very close to the Greek work. The lotus flower pattern around the pedestal is seen at Islamic mosques in the Middle East. The barbarians crouching in the decorative arch are often seen at Hindu temples in India. The queer animal designs of the dragon (east side); the phoenix (south side), tiger (west side) and the tortoise (north side) are influenced by the T’ang Dynasty (618-907) from China.The pedestal shows how Nara was influenced by other cultures. The pedestal seems to indicate influences derived from the famous Silk Road.

The three storied pagoda, which looks as if it were six-storied because of the Mokoshi (lean-to) added to each story, is rare in its style, and is described as “frozen music” because of its rhythmically fine appearance.

West pagoda – Unfortunately the original west pagoda was burned down in 1528. After the reconstruction of the Kondo, the west pagoda was rebuilt in 1980 owing to the movement for the copying of the Heart Sutra.

Genjo-sanzoin-Garan – Hsuan Tsang (600-664) was a famous Buddhist monk from the T’ang era in China. He studied Buddhism for 17 years in India. After returning to China, he translated 1,335 volumes of important Buddhist writings. Hsuan Tsan began teaching “Yugayuishiki (Yogacara). Yakushiji belongs to the Hosso sect and is descended from his teaching “Yugryuishiki” (the founder of the sect is Jion Daishi); Yakushiji and Kofukuji are head temples of the sect in Japan.

In 1942, the Japanese army stationed in Nanjing discovered the remains of blessed Hsuan Tsang. Some of the bones were given to the All Japan Buddhism Association. This occurred during the war and the bones resided at Jionji in Saitama city with a stone monument to house them. As Yakushiji is tied to Hsuan Tsang, some of the remains were transferred thanks to the All Japan Buddhism Association in 1981 and Genjo Sanzoin Complex was constructed. The hall is dedicated to Hsuan Tsang.

Sho-kannon in the Toindo (meditation hall) is a national treasure, rebuilt in 1285. It was originally built in 721. The hall is the oldest Zen meditation hall in Japan.

Sho-Kannon (Bodhisattva, aryavalokitesvara) is a national treasure from the Hakuho period (645-710) made of bronze, 190 cm high. The sacred Avalokitesvara (Kannon) is one of the six manifestations of Kannon, who is chiefly believed to save hungry spirits. The statue retains some influence of the Indian sculpture of the Gupta period (350-650) which came through China in the early T’ang Dynasty (618-907).

Find out more about Yakushiji Temple. 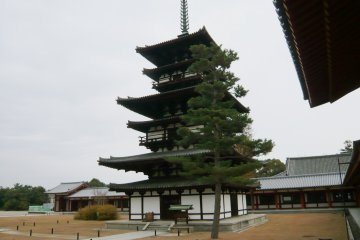 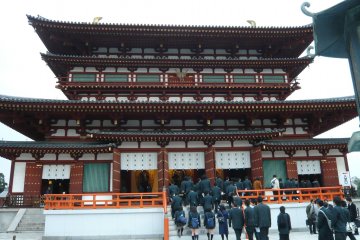 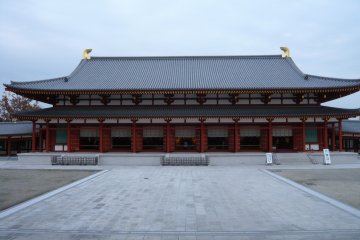 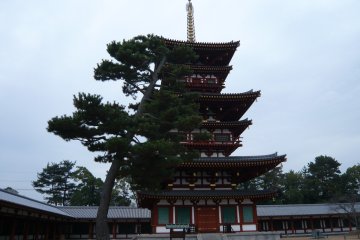 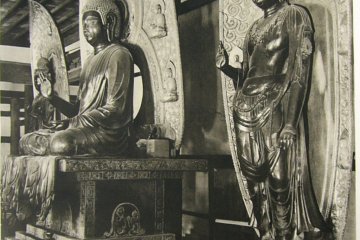 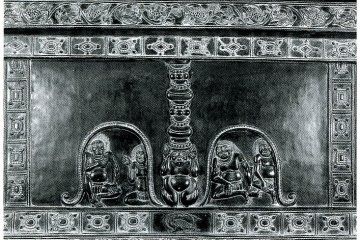 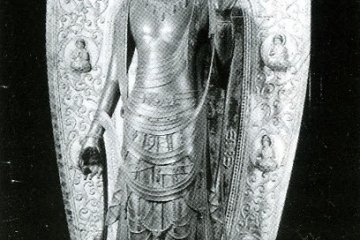 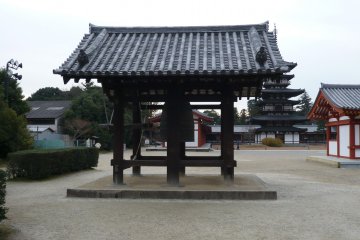 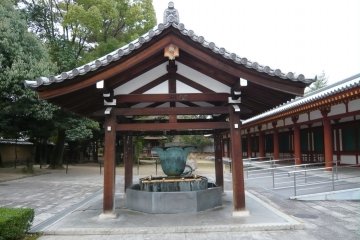 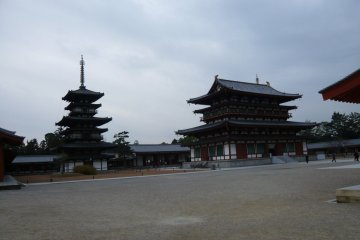 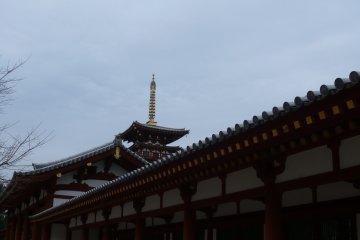