The Fuji Rock Festival is one of Japan's biggest outdoor music festivals. It is held at Naeba Ski Resort on the last weekend in July each year (so Friday 25th July to Sunday 28th July 2014). There is also a free entry night on the Thursday which is a warm up for the main event.

How to get Fuji Rock tickets

Tickets usually go on sale from early March each year with a slight discount until the middle of June. After that you will pay full price. You can buy individual days or a pass for the whole weekend. Tickets can be purchased from Lawson, e+ or Ganban, if you are in Japan. Ganban offer assistance in English so might be the best choice if you don't speak Japanese.

Camping is a festival favorite though flat areas at Naeba Ski Resort are like gold dust and often all snapped up on the Thursday before the festival. The is also a different camping area with its own stage called Pyramid Garden which requires a separate ticket.

Hotels in Naeba town tend to book up really quickly with performers, organizers and repeat visitors nabbing many of the best rooms. Hoteliers are keen to profit from the festivals popularity so often have a minimum stay requirement of four nights and a minimum number of four guests per room. They often use conference and banquet rooms as large dormitory rooms too, so if you are OK crashing on a futon in a large space with another 20 strangers it is a good option for those who can't fill a normal room.

Hotels in Yuzawa town and along the road to Naeba are all served by the shuttle bus and tend to be good choices for couple or those looking for cheaper alternatives. Towns outside of Yuzawa also have plenty of rooms but you might have to pay for a taxi from Echigo-Yuzawa Station if you are coming back in the early hours. Again dormitory rooms are available for those on a budget or travelling alone. The Official Tour Center offers accommodation packages and will send you to HopStepJapan if you can't communicate in Japanese and don't have a Japanese bank account from which to make payment.

Be prepared for a bit of everything. Rain and mud are expected. Umbrellas aren't allowed as they block views so a raincoat or poncho is a good thing to carry. Sturdy boots or gum boots are an investment. Be prepared to walk a great deal as there are many stages dotted around the ski resort. A small tarpaulin to sit on or a fold up chair will let you rest your weary legs. If the sun is out it can be really hot and humid, so sunscreen and a hat can help you avoid potentially festival-ruining problems. There are stalls all over the place trying to sell you festival essentials. Or if you have a bit of time when you arrive there are a couple of hardwear shops in Yuzawa town that can kit you out. There are loads of great food options around the festival but bring some supplies with you is a good idea too.

It is an awesome weekend with thousands of party people descending on a small mountain town to enjoy some amazing music. The atmosphere needs to be experienced for yourself.

The Fuji Rock Festival is held at Naeba Ski Resort which is about 30 minutes from Yuzawa town/Echigo Yuzawa Station. Bullet trains and local line trains can get you to Echigo-Yuzawa. There is then a free shuttle bus for festival ticket holders that leaves from the east exit of the station. The buses run from around 0500 to 0200 the following morning. There can be big queues at peak times but there is a large fleet running continuously so the lines tend to move quite quickly.

There are also bus tours run by the Fuji Rock Official Tour Center that run from Shinjuku, Ikebukuro, Tokyo, Haneda, Yokohama, Funabashi, Saitama, Sendai, Nagoya, Shizuoka, Osaka, Kyoto, Sannomiya, Okayama, Hiroshima, Niigata and Nagaoka. The Official Tour Center will only accept bookings and communication in Japanese. If you email them in English they will direct you to a travel agent called HopStepJapan in Yuzawa Visitor Center who will help you with your booking.

If you are driving be aware that parking at Naeba is limited. You can buy a parking ticket with your entry ticket or many of the locals at Naeba rent out any bit of space into which you can squeeze a car. 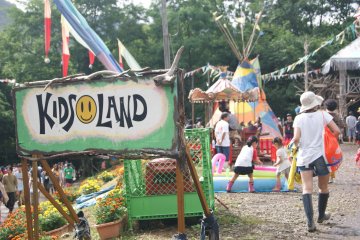 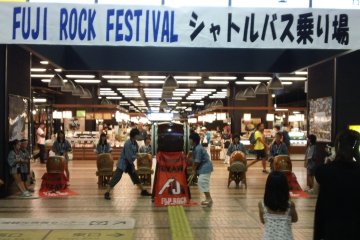 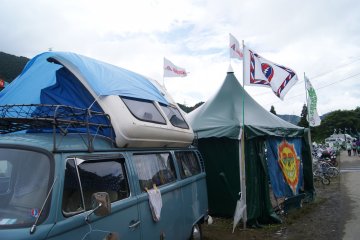 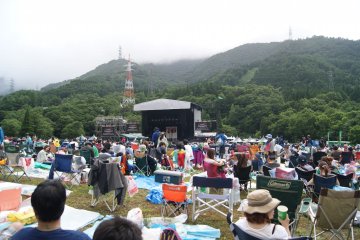 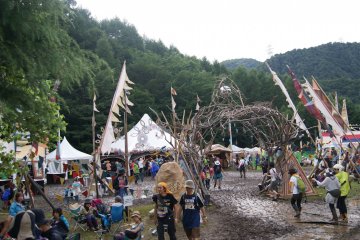 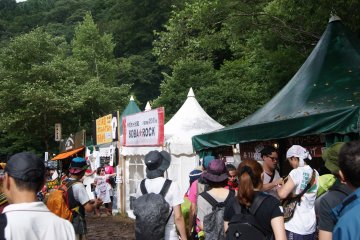 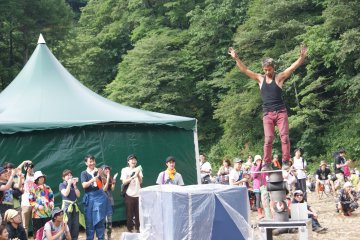