Hunting for Bamboo Shoots in Yuzawa

Foraging for early summer treats in the mountains

Foraging for food in the mountains of Snow Country used to provide an important source of food. Today, it is a hobby enjoyed by many locals. The spring mountain vegetable season has already finished, but once the pink flowers appear on the utsugi shrub in early to mid-June, the local mountain folk know that the bamboo shoots are out. The Snow Country Tourism Office is running a tour that gives people the opportunity to hunt for these tasty shoots.

These are not the large, wide shoots that many people think of when bamboo shoots are mentioned, but rather a smaller, thinner variety of bamboo that can be seen poking through the snow of the ski slopes in spring. The tough outer leaves of the new shoots are stripped off leaving the tender centre part which is enjoyed as tempura, cooked in miso soup, or mixed with rice.

Our guide was a local taxi driver who loves foraging in the mountains (his enthusiasm as he went from find to find was worth the price of entry in itself!), and the drive from Echigo-Yuzawa Station to the ski resort where we were to be foraging was filled with his tales of collecting mountains vegetables and mushrooms. He keeps all his gear in the back of his taxi so that he is ready to dive out into the mountains if he gets the chance!

The foraging area is just off the side of a local ski resort. We're warned that getting lost in thick bamboo is possible so to look out for the ski lift lines if we need to walk back to clearer ground. The guide is as sure-footed as a mountain goat on the steep slope down into the bamboo scrub while the rest of us slither down and get muddy. Fresh bamboo shoots are a favourite snack of bears so our morning is accompanied by the tinkling of bear bells.

The guide shows us what we are looking for, and soon our eyes adjust to the close shrub and start finding shoots of our own. The thick ones are the best, and if they have a red tint they are supposedly more tender. This kind of bamboo is found all over the region but the ones in this area, maybe because of the elevation, are apparently sweeter and tenderer than the ones further down the valley.

Making your way through the thick bamboo is hard work but after a few paces you crouch down and scan the undergrowth for the small shoots sticking up. Everyone soon gets into it and as their bags fill up, start to get a bit more discerning with their selections.

After about an hour of foraging, we all make our way out to the car where there is stove going with the soup on. We learn how to strip off the outer leaves, and then the small tips of the shoots are battered and deep fried. The slightly thicker end of the stalk is chopped up and added to the miso soup. It is a delicious meal that we have worked up an appetite to contribute to, so probably tastes even better as a result. Sitting out in the fresh air and lush greenery of the mountains is also a joy. 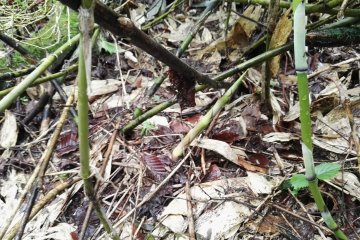 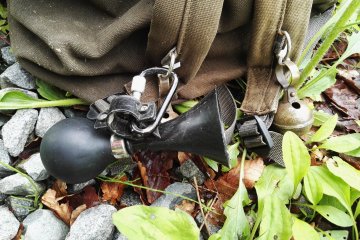 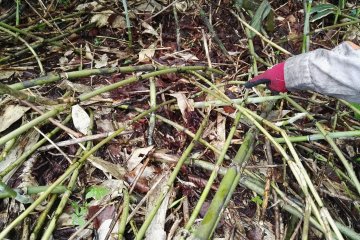 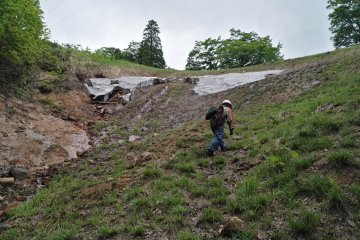 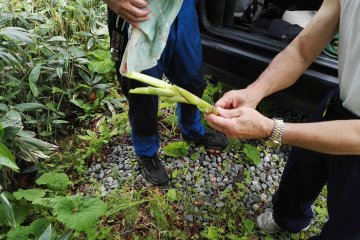 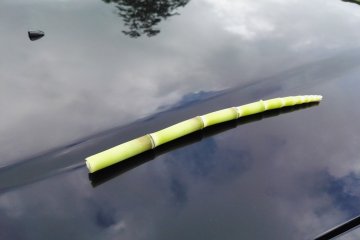 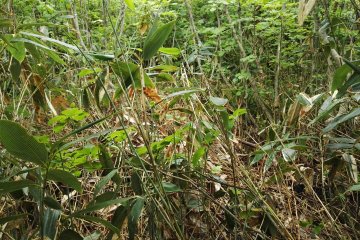 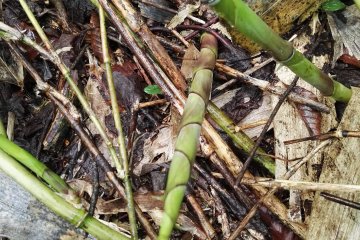