5,000 years of history with a real connection to today

5,000 years ago, Jomon-era people were living around the Shinano River which runs from Niigata City down to Tsunan Town. Traces of their settlements, their tools, and especially their amazingly decorated flame-shaped pottery are often turned up in this area, and there are several notable archaeological sites along the course of the river. The pottery found in Niigata is unlike anything else found in the rest of the country from this period, and the flame-style pots have been designated a national treasure. One of them will be housing the Olympic flame in 2020.

The Snow Country Regional Information Center recently organised a tour to take in all the major sites along the Shinano concerning flame-shaped pottery.

The Jomon period lasted over 10,000 years. Whereas other great cultures were involved with wars, changing of dynasties/cultures, and rebuilding, the Jomon period in Japan was mainly passed in peace living off the land. There was no development of agriculture, just a hunting/gathering lifestyle. Settling in villages meant that the sick and the ill were no longer left behind, and the knowledge from elders could be shared with younger generations. The development of tools and pots led to an improvement in the standard of living, as well as a broadening of the diet as cooking and soaking were now possible. Traces of food have been found burnt into the bowl of the pots. Why the ones in Niigata prefecture were so carefully adorned is not known. There seem to be rules for their construction though.

The first pots were found at the Umataka site in Nagaoka about 90 years ago by a hobby archaeologist. At that site today there is a museum dedicated to the era. They have also recreated some period dwellings, with the posts of the huts sitting in the exact holes that were uncovered during the excavations. The very first flame-shaped pot found is on display here too.

Construction sites, or the creation of rice terraces have turned up other important sites. There is a Folk Museum at Shitada in Sanjo that has some important finds. Close by are the remains of another important settlement that sits at the confluence of a couple of rivers and under a huge cliff that would have served as a landmark to any travellers. The cliff used to be under the sea and was made from lava from an eruption. It provided salt for animals, so it was a good place to hunt.

The heavy snows that are a feature of the area even today were also probably around in Jomon times. They are likely to have started around 8,000 years ago. Back in the Jomon era, the huts had to withstand the heavy snow and were dug slightly underground to keep in the heat in winter. Food was stored under the snow. Hunting became slightly easier as the footprints of animals could be seen.

At the Tokamachi Museum they have a display that shows the inside of a Jomon era hut with somebody making thread from a fibrous plant similar to hemp in order to weave cloth. Tokamachi has a long history of textile production. Further along in the museum they have a picture showing a more modern household with an old lady making thread at home, and she is using exactly the same tool as the one found from the Jomon era.

Najamon in Tsunan was another stop on the tour. They have the biggest flame-shaped pot and crown-shaped pot from the period which were found nearby. They also have some recreated dwellings from the time, and run a snowshoe tour in winter that finishes inside around a fire. Again the woods and rivers of the area were important factors in the setting up of settlements. There are several sites here which are yet to be excavated but are scheduled to be in the near future. It is not uncommon to walk the edges of rice fields in this area an pick up stone tools or fragments of the pots. Once you have toured the Jomon era facilities of the prefecture you will know what you are looking for.

The flame-shaped pottery is beautiful and is possibly the very start of art. They come from a fascinating period of history. It is so long ago but you can see many influences from those days in the culture of today in the region.

There is an exhibition of flame-shaped pottery at Kokugakuin University Museum from December 10th 2016 - February 5th 2017. Well worth a look! 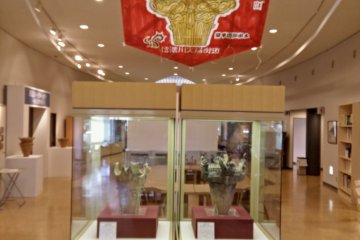 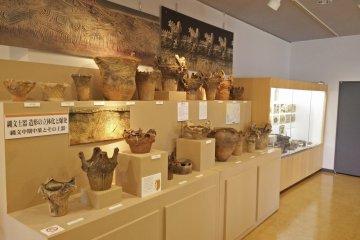 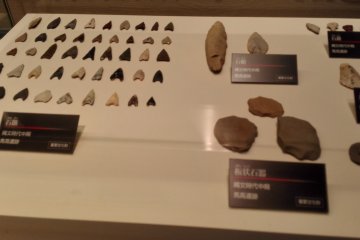 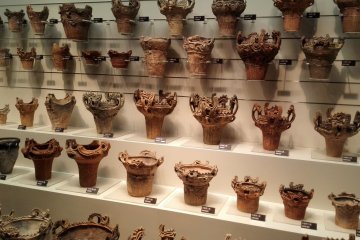 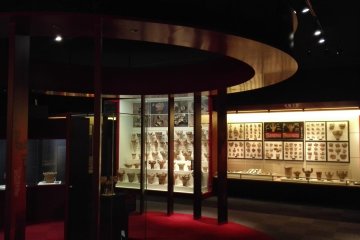