The most unusual vehicle you will ever ride

Ever fancied a ride in a cut-off barrel? Now, this is what the tarai-bune, a kind of tub boat, seems to be. Originally they were practical items used for navigating around the cliffs to collect seaweed and abalone but nowadays they mainly serve to amuse tourists in Ogi Town on Sado Island.

The tarai-bune seem round but actually they are slightly oval. Traditionally, they were made of cedar wood and bamboo. Sadly, the craft of making tarai-bune is dying out as the young generation is not much interested in taking up this traditional craft, nor is there a high demand for these boats in the day and age of plastic and fiber glass.

I went to Ogi Harbor where these boats are for hire for a ten minute ride and I got on the boat with a couple of friends and the “driver”, a local woman in distinctive traditional fisher folks gear. She operated the one paddle moving it back and forth to navigate the round vehicle and make it move in a straight line rather than going in circles.

It seemed easy enough but turned out quite difficult. You have to balance your moves or else you will go nowhere, very much to the amusement of the tarai-bune experienced locals. After trying to maneuver this “large pot”, the local lady will lend a helping hand and safely steer you back to the shore.

There are two places in Ogi Town where you can go for a tarai-bune ride. One is at Ogi Harbor and the other one is close to Yajima-Kyojima (Ya Island and Kyo Island), two tiny islands that are joined by a red-lacquered bridge. The tarai-bune in Ogi Harbor are just cruising around the port area.

Yajima-Kyojima is a well-known spot amongst the Japanese for trying out tarai-bune in a more scenic place than at Ogi Harbor. You might have already seen the scene of the tarai-bune in front of the Yajima-Kyojima islands many times on some promotional adverts displayed in JR stations in Tokyo.

Sitting back and enjoying the ride is nice but steering the boat yourself is the real interesting thing to do. Can you imagine yourself making your way in this boat around some cliffs in rough sea to collect seaweed? This is a sure way to get seasick, but this won’t happen to sightseers.

This boat ride is a nice family activity, or if you are inclined to impress your girlfriend, or your boyfriend for that matter, a nice option for an unusual date. Children will love it, and it is also much fun to watch others trying to steer the boat. 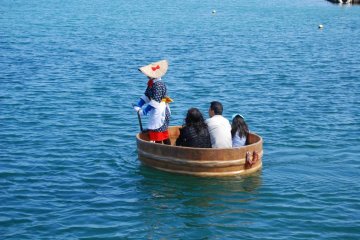 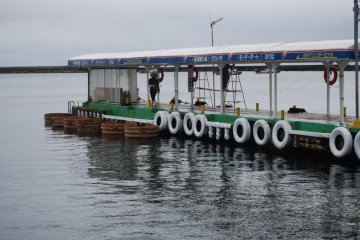 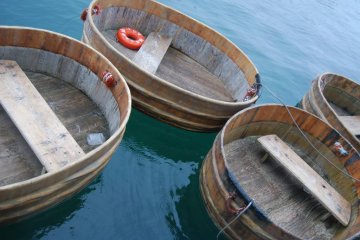 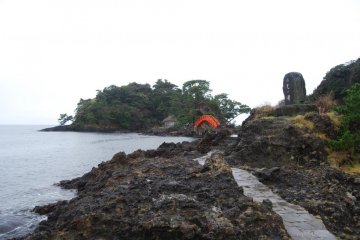 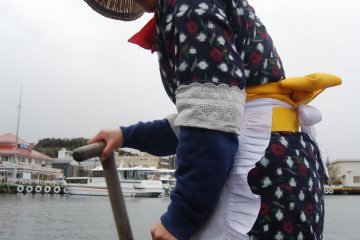 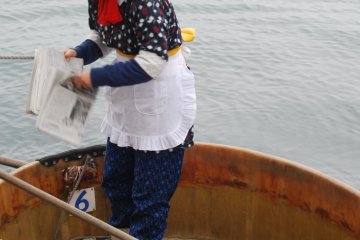