A city of bridges

Ibara is located on the southwestern edge of Okayama prefecture, bordering Hiroshima. The Oda River, a branch of the Takahashi River, flows from west to east across the southern part of the city and the downtown area sits on the plain of the river basin.

Ibara City was closely tied through economics, transportation and daily living to the neighbouring villages of Yoshii in Shitsuki County and Bisei in Oda County. On March 1st 2005, the city and two villages merged to create the boundaries of present-day Ibara City.

Ibara City has much history. Nasu no Yoichi is known as one of the heroes of the Genpei War (1180-1185). He was a warrior from the Kanto region in the service of the Minamoto clan and fought alongside Minamoto Yoshitune during the battles of the war. In the battle of Yashima, while on horseback in the sea, he used a bow and arrow to shoot down a fan that had been placed atop the mast of a boat belonging to the enemy Taira clan. This daring feat instantly ensured that his name would go down in history. Ibara Station was designed to represent the bow he used.

Ibara is a city of bridges as there are over fifty within its boundaries. Showa Bridge is the home of the Ibara fireworks display, one of the true symbols of summer of the city. It is bustling with crowds and street stalls every year and about 2000 fireworks are launched. It is usually held at the beginning of August.

Momiji Bridge is in the Tenjin Gorge. The beauty of the gorge changes with the seasons. This scenic area along the Oda River, centered on the sacred shrine forests of Tenjin-sha and Kuromaru-jinja, lies in the upper Takahashi River Prefectural National Park. Along the 1 kilometer length of the gorge, great old maples, firs and oak trees cast their reflections across the clear water.

Bisei Astronomical Observatory is also a popular tourist facility. It is open to the public and a great place from which to look at the stars.

Ibara is accessible by train on the Ibara line. Take the Hakubi or Kibi line to Soja Station and change there. 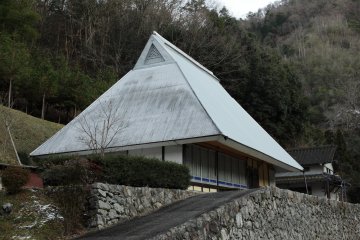