An island in the middle of the city

I had often wondered why there weren’t people living along the many rivers of Okayama. Apparently, in the past there were inhabitants all along the three main rivers of the prefecture and its tributaries but the local government decided to move people away from these areas. There is one place that offers a glimpse into Okayama’s past.

Nakajima Town is divided into two parts, east and west and is smack dab in the middle of the Asahi River. There are actually islands throughout the river but this enclave is the only one with a residential community. Because Japan and indeed Okayama has no shortage of bridges it is difficult to tell where the two islets begin and end. I had often walked or ridden my bicycle past the Nakajima Town without knowing what it was called. I was told that the islands had been the location of bordellos and other seedy establishments.

I walked into West Nakajima from the west bank of the Asahi River and didn’t need to close my eyes to imagine the kind of life people use to have in this place, I am sure the river was important for water and fishing in days gone by. What I saw were old narrow streets that didn’t last long before being met by the water’s edge. There are Edo era merchant houses that seem to be frozen in time. I had to do a double take when I saw a community bulletin board with a notice of an upcoming event. Then I realized that this community was still alive and although I didn’t see anyone I heard the sound of a vacuum cleaner as I approached the path that runs the length of the island.

Next, I walked over the small bridge that connects West Nakajima to East Nakajima. East Nakajima seemed a bit more affluent. There were fewer derelict houses and more small businesses. People seem to have figured out how to make the best of a neighborhood with a spotted past that has been blessed with a central location and natural isolation. This is “deep Japan” as one website with pictures of the town calls it. It is worth a look because Nakajima Town is Japan as it really is. 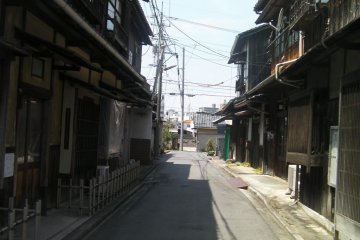 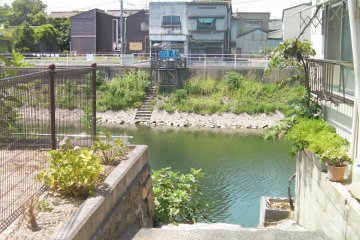