Japan is overflowing with traditional gardens, parks and other green spaces each more magnificent than the last. Certain ones, however, will leave you with a stronger impression than the others. This is the case of the magnificent Okayama Korakuen Garden which can be visited in the city of Okayama to the West of the main island of Japan.

With the Kenrokuen garden located in Kanazawa and the Kairakuen garden in the department of Mito, Korakuen shares the title of the most beautiful garden in Japan. I have unfortunately not (yet!) had the chance to visit the first two, but I can confirm that the distinction is deserved with regards to Korakuen.

The construction of this garden started in 1687 on the orders of Lord Tsunamasa Ikeda, second lord of the Ikeda lineage. It was primarily built for Lord Ikeda’s leisure and he would occasionally invite civilians and their guests to the garden to entertain them as well. When the garden was first built, it did not have hills. The main garden features were rice fields and farmlands so that visitors could fully enjoy an open view in the garden. Tsunamasa’s successors preserved the garden and formed the scenery that is in evidence today.

However, over the course of history, Korakuen suffered. In the 20th century, it was severely damaged by a flood in 1934 and the bombardments in 1945. Fortunately, many pictures and designs dating back to the Edo era when it was constructed were found, and the current layout of Korakuen was established based on these original designs. A view of the garden’s scenery today helps us to imagine the garden during the Edo period.

The garden has been open to the public since 1884, which is the date on which Korakuen became property of the department of Okayama; it would have been a shame for such a magnificent garden to remain inaccessible!

As a garden, Korakuen is divided into several zones. Bit by bit, as the visitor goes further into the grounds, they’ll discover an immense body of water where carp swim peacefully, a grove of plum trees, and hundreds of flowers which come out and make Korakuen beautiful at every season. They may also be able to spot some cranes in the garden!

I particularly recommend Ryuten, the rest area located at the foot of the artificial hill. It is ideal for taking a break, after having admired the garden from the top of the hill! The lords in the past took rests here after their own walks in the garden. The scenery in front of Ryuten is particularly beautiful. A stream of water flows in the middle of the wooden shelter keeping the inside of the building cool even during summer. Although the stream of water may look inviting, visitors are asked to cool only their minds and not any actual parts of their body in the water..

The feeling of general peace and quiet is reinforced by the fact that the garden was designed in such a way as to hide all trace of tall buildings, an ever increasing site on the Okayama skyline, with trees. The only edifice that is taller than all this vegetation is nearby Okayama Castle, which is only a few minutes on foot outside the garden gate. 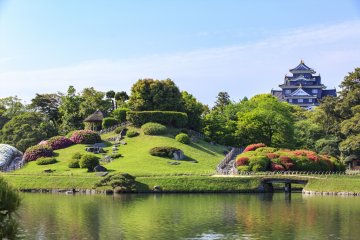 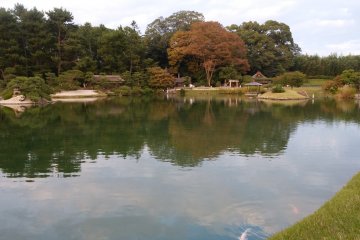 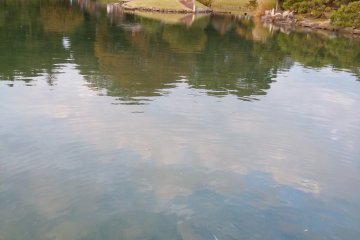 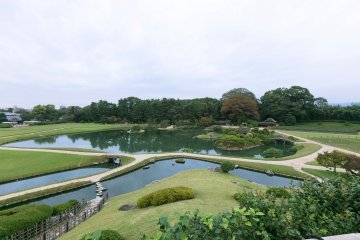 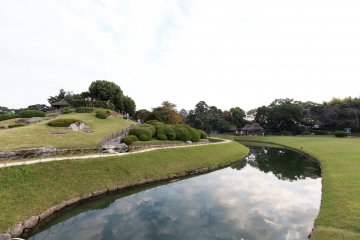 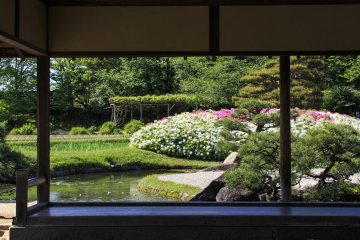