Travelers coming to Okinawa surely will encounter Blue Seal ice cream during their visit. Blue Seal is Okinawan Ice Cream. It traces its origin back to 1948 when it began production as Foremost Company, primarily as a dairy producer providing food products for American military bases on Okinawa. The company became Foremost Blue Seal in the 1970s and has been available to the general public ever since.

Blue Seal Ice Cream can’t be missed because it is in many restaurants, as well as nearly all grocery stores and convenience stores island wide. Tourists won’t miss Blue Seal ice cream because its popular BigDip stand alone ice cream parlor restaurants and other ice cream shops are located at popular tourist destinations as well as in malls.

A very popular location to sample Blue Seal ice cream is at it’s BigDip Chatan restaurant located along Route 58 in Chatan near Mihama American Village. BigDip Chatan has a 1950’s ice cream parlor feel to it thanks to its traditional ice cream shop furniture and decorations and its history proudly displayed along the walls in photographs. The building frontage has a huge triple scoop neon sign and the words “Okinawa Ice Cream” prominently displayed. Inside, more than half of the length of the building is dedicated to the ice cream counter. All of the mainstay flavors are available such as vanilla, chocolate, and strawberry. Blue Seal is distinctly Okinawan because it began here on Okinawa but also because it offers distinctly Okinawan flavors such as sugar cane, matcha, and Okinawan sweet potato.

BigDip Chatan’s menu has 20 pasta dish selections as well as hamburgers and hotdogs. It also sells donuts and other pastries. It even has an order counter for shipping ice cream back to mainland Japan which many tourists utilize.

I recently stopped by for lunch and ice cream on a hot Okinawan afternoon. Intrigued by the Taco Dog – a creation that combines a regular hotdog into one with the taste of Taco Rice – I ordered it along with a double cheeseburger and fries. The hot dog was good but it really tasted like a chili dog that happened to have lettuce under the wiener and tomato on top. I had expected to savor more of a taco taste without the shell and without the rice. The hamburger was very traditional with a freshly baked bun, fresh beef, a slice of cheese, onion, lettuce and tomato. The ketchup and mustard are placed between the two patties which made it difficult to keep the buns and meat aligned. I otherwise really enjoyed the double cheeseburger. The French fries are a thick steak fry cut and are lightly salted. Having finished lunch I returned to the ice cream counter for a scoop of Blue Wave Splash ice cream on a traditional Blue Seal ice cream cone.

BigDip Chatan is located on Route 58 in Chatan Town, about 40 minutes north of Naha. Look for the big ice cream cone sign on the road way; it's located next door to Starbucks. Store hours are from 10:00 ~ 25:00 (1 a.m.) daily. The last pasta orders are accepted at 22:30. Japanese yen and American Dollars are accepted as well as Hong Kong Dollars, Taiwan Dollars, Chinese Yuan, Korean Won and the Euro – and credit cards are also welcome. 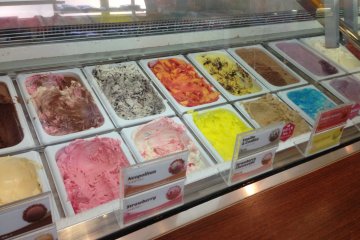 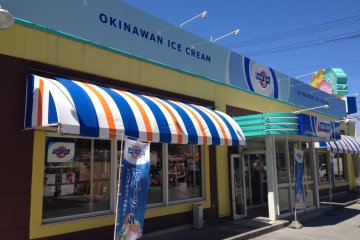 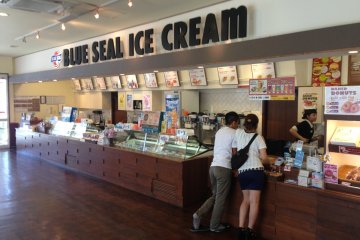 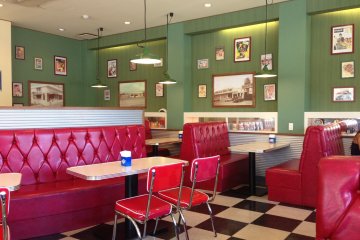 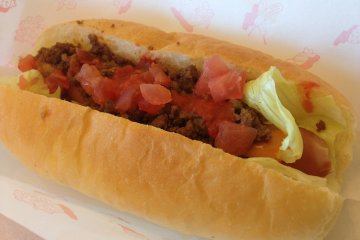 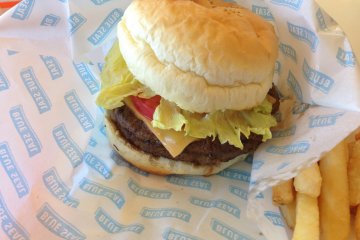