A rustic Osaka village of history, mystery, and nature

Amami is a region in the far south of Osaka Prefecture with a history dating back to the dawn of Japanese civilization. It boasts an abundance of nature and a rustic charm to make for a relaxed change of pace for those looking to escape the urban sprawl. It is made up of several small villages, each with its own story to tell.

Among the handful of villages, you can find Kanii-jinja, a small and mysterious shrine set upon a low, wooded hillside, close the border with Wakayama Prefecture. It is believed that this shrine marks one of only a few locations that Jimmu-Tenno, the first Emperor of Japan, stopped with his army during his conquest of Yamato some 2,000 years ago.

The shrine still holds an annual Chochin-mairi (lantern festival) at harvest time. From starting points in three of the surrounding villages, men slowly carry lanterns on long wooden poles towards the shrine.

As they march, they sing a traditional 400 year old song in a style called Ise-ondo. This is a call and response type of song where the leader will sing out one line then the rest of the group sing an answer. Only a handful of people still know the songs (there are at least three local versions) and I consider myself very lucky to be one of the lantern carriers. On 3 April each year, the shrine also holds a mochi throwing festival to mark the death of Emperor Jimmu.

The narrow lane running up the hill past the shrine is known as the Hinoki (Cypress) Slope. There are local legends that tell of mischievous fox and tanuki spirits that inhabit this area. Their favorite trick is to make lone travelers believe they are relaxing in a hot spring when in fact they are sitting in a puddle.

The lane continues up into the quiet farming village of Shima-no-Tani before eventually disappearing into a hiking trail that leads towards Mount Kongo (the highest mountain in Osaka Prefecture) and the border with Nara Prefecture.

Nagaretani Village and the Christian Jizo

On the west side of Amami is the village of Nagaretani. There is some evidence that this was once a hiding place for Japan's "Hidden Christians" during the Edo Period (1603-1868). A small cluster of houses here has an unusual stone carving. On the face of this stone are 13 images of Jizo in four lines of three with a single carving on the top row which is believed to represent Jesus at the top with his 12 disciples below.

The carving overlooks picturesque terraced fields set to a backdrop of mountains making it well worth the effort to find. The road through this village continues up towards Mount Iwawaki which forms part of the Diamond Trail. This hiking trail runs down the Nara/Osaka border before turning across the Wakayama/Osaka border towards the sea.

Further down the hill from the Jizo Statue is Nagaretani Hachiman Shrine. This shrine is locally famous for its 400 year old Ginko Tree. This ancient tree is some 30m tall and the only one of its kind in the area and is visible from afar.

Passing through the area is an ancient pilgrimage trail, the Koya Kaido. This old road runs from Kyoto, far to the north, to sacred Koyasan in the south. It follows the route that Kukai, founder of Koyasan, used to take when he was summoned for an audience with the Emperor.

From the late Heian Period onward, it became a popular pilgrimage for Emperors to take. This popularity slowly filtered down through the nobility and samurai class and eventually, even peasants made the journey.

Running west to east along the mountains is another half-forgotten trail; the Katsuragi 28 Shuku Kyozuka. This is a collection of 28 tiny shrines that mark the route that En-no-Gyoja walked when he was first laying the foundations for Shugendo. Four of the Kyozuka are hidden among the woods and hills surrounding Amami.

Nowadays, these old roads are all but forgotten, especially in comparison to their more famous cousin, the Kumano Kodo. For those who know where to look, there are dozens of fascinating little stories associated with these legendary monks and linked to many small shrines and curiosities along the way.

In the center of everything is Amami Onsen Nanten-en. This is a small, traditional onsen ryokan with natural, radium infused hot springs, a large garden and only 14 guest rooms. It is a popular place for overnight stays, and also provides lunch and onsen packages featuring exquisite Kaiseki course meals served in private rooms.

The owner is both a tea ceremony master and an Ikebana (traditional flower arranging) master who often holds classes at the ryokan, accompanied by one of their English speaking members of staff (often myself). They also have rental bicycles and English language guide maps, making it a great base to explore the surrounding area.

The building itself is over 100 years old and is a Registered Cultural Asset of Japan, one of only three remaining wooden buildings designed by famous architect Kingo Tatsuno. He designed many buildings in the early part of the 20th century, including iconic Tokyo Station.

This ryokan is a popular Hanami spot with several varieties of cherry trees within the gardens. A late blooming type called Yaezakura also grows along the narrow lane between Amami Station and Kanii Shrine - cherry blossom season in Amami lasts for a month.

Across the road from the ryokan is a small mountain called Kanaeyama (Iron Mountain). It overlooks a crossroads called Deai-no-Tsuji which was the site of a little known 14th century battle. Kanaeyama was the base for Kusunoki Masashige. Here, he ambushed and destroyed a much larger army. He built a small shrine on the mountaintop, a reconstruction of which exists today. However the trail up the mountain is quite well hidden and difficult to climb. I only visit the shrine a few times a year to check and clean it, but the view from the top is fantastic.

If you are looking for nature and a good story within Osaka Prefecture, the villages of Amami are perfect places to wander.

Free walking maps in Japanese are available in this unmanned station and English information is available at the ryokan which is just a 2 minute walk from the station. 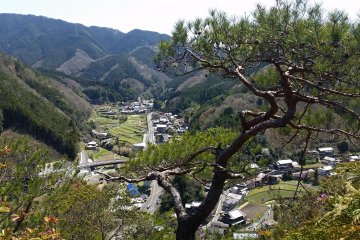 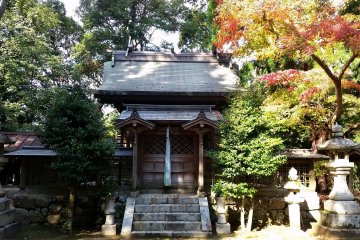 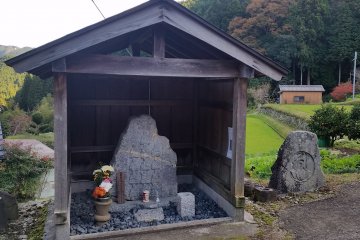 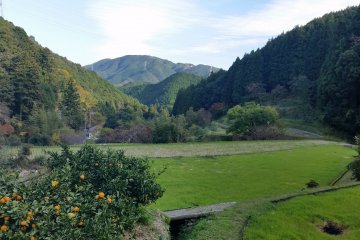 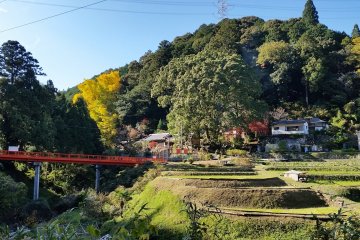 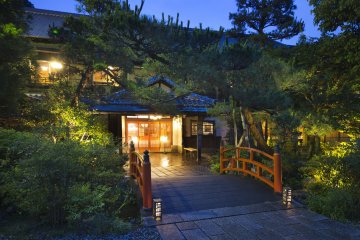 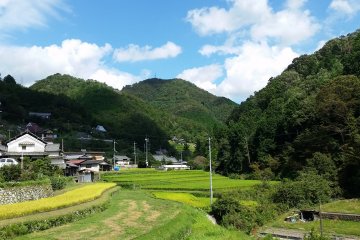 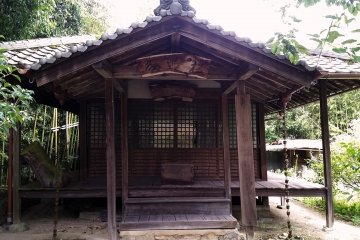 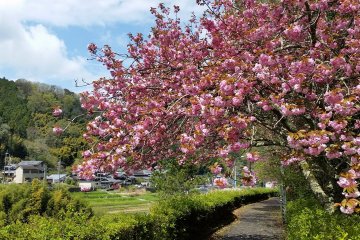 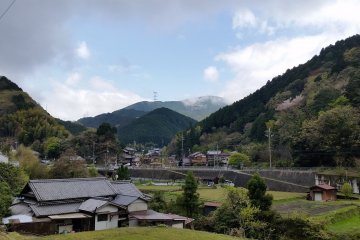 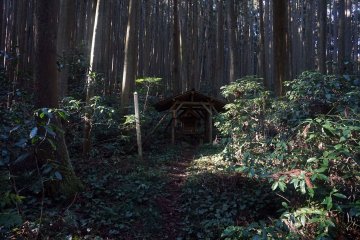