Hiking the highest mountain in Osaka

At 3,691 feet (1,125m), Kongo-san is the highest mountain in Osaka Prefecture and a perfect place for hiking all year round. There are a number of trails leading up the mountain and some of these are relatively easy, making it an ideal family activity.

Mount Kongo also has an incredible amount of history hidden among the trees, if you know where to look. From the sites of one of Japan's "Top 100" castles to the birth of Shugendo, the mysterious form of mountain asceticism performed by Yamabushi.

In the year 634, the legendary mystic, En-no-Gyoja, was born in Katsuragi, just over the border Nara Prefecture. He would use the nearby mountains such as Kongo-san and Katsuragi-san, as well as some of the hills in the village of Amami, to develop the earliest ideas of Shugendo.

He would go on to establish several temples in the area including nearby Kanshin-ji as well Temporin-ji, right at the top of the mountain. Perhaps his most famous temple though is Kinpusen-ji in Yoshino whose main hall is the second largest wooden structure in Japan.

Skip forward some 700 years to the end of the Kamakura Period. Japan is in the midst of a civil war as Emperor Go-Daigo tries to overthrow the shogun and return power to the throne. One of the emperor's top generals, Kusunoki Masashige, fresh from his defeat at the siege of Shimo-Akasaka Castle, established Chihaya Castle on the slopes of Mount Kongo.

Not a castle in the traditional sense, it was more of a series of earthworks and clever traps. Movable bridges, pitfalls and stacks of rocks and logs designed to hinder and crush any enemy that tried to attack. Since Kusunoki was native to the area, he also used his intimate knowledge of the terrain to great effect.

When a huge army of the Hojo Clan laid siege to the castle, Kusunoki's smaller force managed to inflict horrendous losses on the enemy. He held them up long enough for Go-Daigo's other top generals to triumph elsewhere, leading to the downfall of the Kamakura Shogunate.

There are several routes up the mountain but the most popular starts near the Kongo-san Rope-way bus stop. For the most part, this trail is quite wide and not particularly steep making it suitable for most age groups. The scenery is a million miles from what most people expect of Osaka; with huge trees flanking the trail and spreading out into an impenetrable woodland.

A small river runs alongside the trail for much of the route. The water is fresh and clean enough to drink, with a few places where you can easily refill your water bottles. From time to time you will even come across small waterfalls which, in the heart of winter, may also be frozen.

In fact, Kongo-san is one of the very few places in Osaka Prefecture that regularly sees snow in winter; with the heaviest in January and February. This creates one of Kongo-san's most famous sights; Juhyo, or Snow Monsters, caused by the way the snow settles on the trees. If you are hiking in winter, shoe spikes and very warm or thermal clothing are essential as the trails can be slick with ice and the summit very cold!

As you get higher, the trees begin to thin out and you start to catch a glimpse of the landscape below. The undulating, forested peaks of Kongo-Ikoma-Kisen Quasi-National Park stretch out before you as and draw you in with the promise of mystery and adventure. This range also includes another sacred mountain, Shigisan, and its temple to Bishamonten, God of War.

From time to time, you might come across tiny shrines along the trail. The mountain has been a place of pilgrimage for hundreds of years but in the past, its isolation made it a much more dangerous place than it is now. These altars were built so that people could stop, rest and pray for a safe climb.

Eventually, the path widens out into a large clearing that contains a reception center and a children's playground. Kongo-san covers quite a large area and even plays host to an observatory. This part of the mountain is where you can find the upper terminus of the rope-way though as far as I understand, it is currently out of action.

The trail continues on and as you approach Temporin-ji temple, engraved stone pillars mingle with the trees on each side. These monuments are erected in honour of people who have made significant donations to the temple. They are a common sight at most temples however; in order to qualify for a monument at Temporin-ji, you must have also climbed the mountain at least 1,000 times.

This small, mysterious temple overlooks a small courtyard at the centre of which stands a statue of Fudo-Myoo. This imposing figure with his intense expression, sword and halo of fire is an important deity in Shugendo as well as many schools of Japanese Buddhism. Statues of O-Fudo-Sama can often be found in mountain temples and especially around mountains used by Yamabushi for training.

Just beyond the temple is a seating area and an old wooden building that houses a cafe. It is a kind of local tradition that people climbing the mountain stop here to eat some instant ramen. I recommend bringing a fork in winter because gloves or no gloves, trying to use chopsticks in -8 Celsius (17 Fahrenheit) is a challenge!

The summit and viewing area is very close by and on a clear day, the view is quite spectacular. From the top of Kongo-san, you can see the whole of Osaka Prefecture laid out before you. You can even pick out specific landmarks such as the unusual, white Tower of Perfect Liberty in Tondabayashi, or the massive Abeno Harukas building far to the north. And in winter, when the sky can be at its clearest, you can see all the way across Osaka Bay to Kobe, the island of Awaji and the east coast of Shikoku.

There is a sign at the lookout point with the date and time and once per hour, many people at the summit will gather here for a group photo taken by a remote camera which is then uploaded to the Kongo-san website.

My preferred route back down the mountain is opposite the cafe. This path is much narrower than the route up and has quite a lot of stairs made with logs. A little steeper and more difficult, you will likely see fewer people but it has the advantage of ending at another bus stop and a traditional tofu shop.

There is also a slightly hidden trail that leads up an earthen bank to Chihaya-jijnja, a small shrine that marks the location of Chihaya Castle. Despite it being one of Japan's Top 100 castles, there are no ruins to see. The shrine itself though is quiet and mysterious and feels like it has been locked in time. There is a slightly easier access to the shrine from the bus stop; a set of rough stone steps that lead up through the torii. Taking the steps also takes you passed the Japanese language signboard giving the history of the castle and a couple of scarecrow like figures dressed in samurai armour.

Mount Kongo is part of a long series of hiking trails that run most of the way south along the border between Osaka and Nara Prefectures. After Kongo-san, it turns west along the Osaka / Wakayama border toward the sea. Including some 12 mountains in total, it would take several days of camping to walk all at once so most people tend to do one or two mountains at a time.

The Diamond Trail is not so well known outside of Japan but it, and Kongo-san in particular offer a perfect escape from the city and show a side of Osaka that many people don't even known exist.

If starting from near Namba, Shinsaibashi and Dotonbori, take the Nankai Koya Line from Nankai Namba Station to Kawachinagno Station. From Kawachinagano Station, take a bus from stand 3 bound for Kongo-san Ropeway and stay on until the last stop.

Alternatively, you can take the Kintetsu Line from Abenobashi Station and get off at either Tondabayashi Station or Kawachinagano Station and take a bus bound for Kongo-san Ropeway. 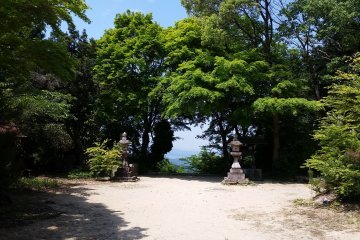 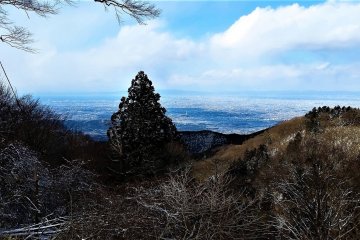 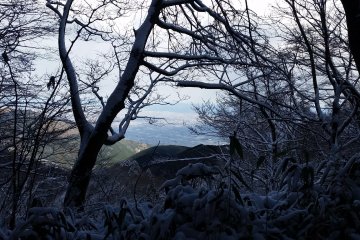 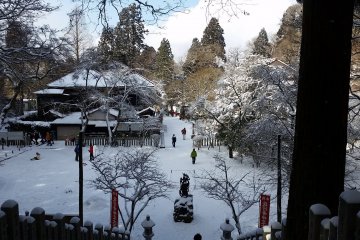 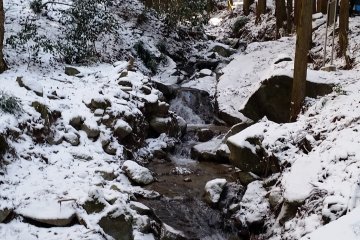 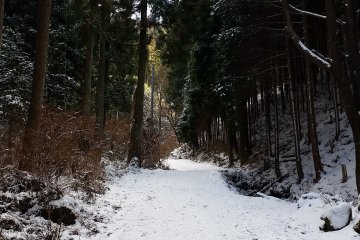 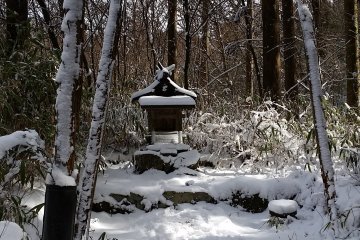 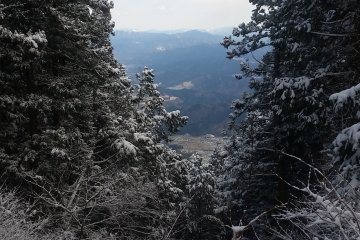 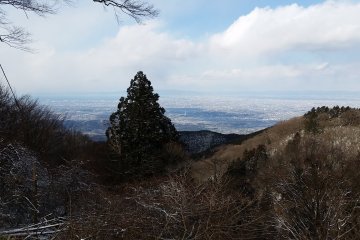 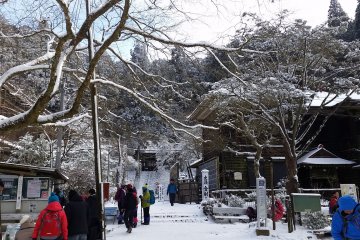 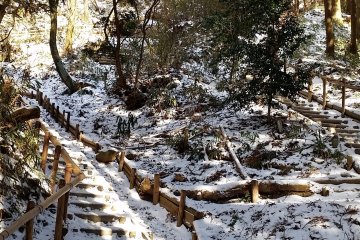 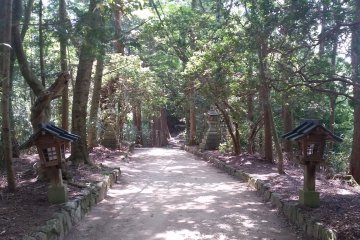 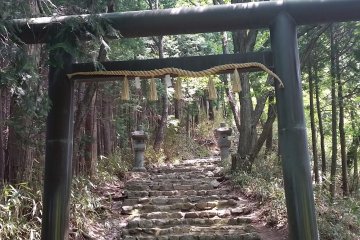