The faded glory of retro Osaka

Tsutenkaku (通天閣) literally means “The tower reaching to heaven”. Come here to observe Osaka from the observation tower from its 4th and 5th floor! Despite its name, Tsutenkaku stands at 103 meter which is not an uncommon height for buildings in any cities like Osaka. There are other observation towers in Osaka but if you have an Osaka Amazing Pass that grants you a free entry here, it would be a good stop during your trip into south retro Osaka, Shinsekai.

Before stepping into the tower, remember to look out for the big 8-sided clock on the east side of the tower. Not only colorful, it changes color every minute, this clock is also said to be the biggest in Japan!

Another little known secret about Tsutenkaku is also its neon weather forecast on the tower’s turret. This is indeed a creative work from the minds of Japanese. The neon turret has a combination of 3 different colors to indicate the next day’s weather and its changes!! White for a clear day, blue for a rainy day and orange for a cloudy day.

The original tower that was built in 1912 actually did live up to its name as the second tallest building in Asia. The design was also unique for Japan as it was modeled over the Eiffel Tower and Ard de Triomphe. On the break of World War II, the tower was demolished for its steel to be used in the war. The current tower that stands in Shinsekai now was built in 1956 by the local residents who as a symbol of love of the original one. The new tower still carries the same name but with a different ‘face’, to be exact 8 different ‘faces’ on the tower building.

If you come from Tsukenkaku dori, you would have spotted the queer–looking- long-eared Biliken statues all over the street. Probably the most popular Biliken- God of good luck statue is the one in Tsutenkaku, sitting smiling to his visitors on the 5th floor.

Do not forget to rub the sole of his feet as and make a wish to Biliken! Who knows, your wish to come meet him again in the future will be fulfilled.

Find out more about Tsutenkaku Tower. 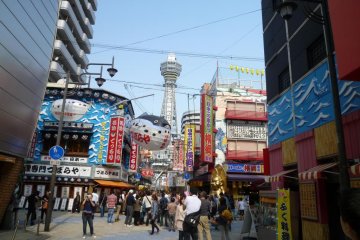 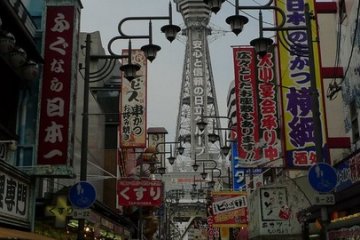 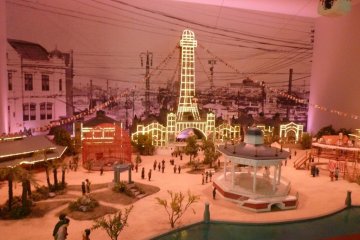 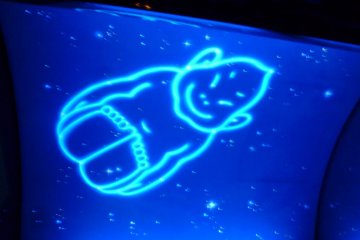