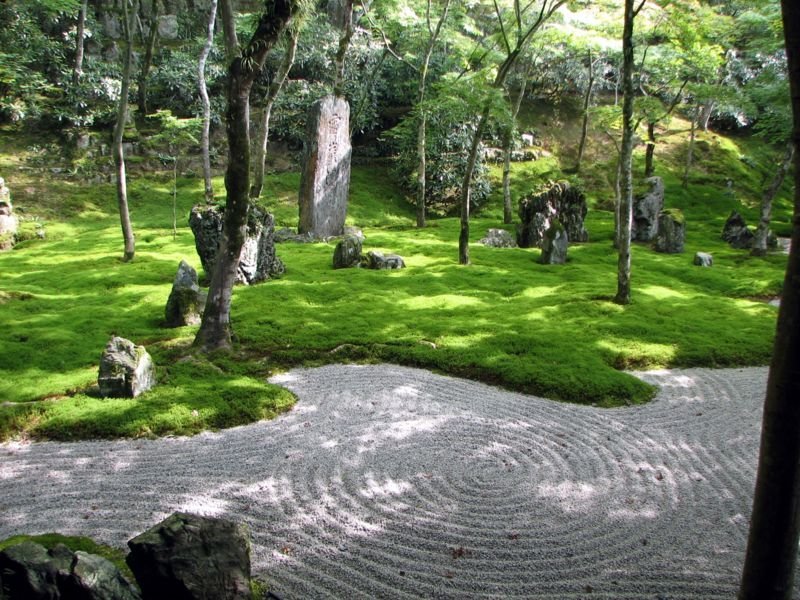 The Komyozenji Temple in Kyoto is a Buddhist temple that was founded in 1273 by the Buddhist priest Tetsugyu Enshin. The temple is known for its rhododendrons, autumn leaves and Karesansui rock gardens and belongs to the Tofukuji school of Rinzai Zen Buddhism. In the Main hall is a statue of the Medicine Buddha Bhaisajyaguru.

The main attraction of Komyozenji is its beautiful Japanese gardens. The temple has two rock gardens that visitors can admire. The smaller of the two gardens consists of fifteen rocks set amid raked pebbles. The rocks are distributed in such a way that they form the Japanese symbol for "" light "". The larger garden can be viewed from the main building of the temple. In addition to stones, it also houses some plants. The entire garden of the Komyozenji Temple is one of the most attractive temple gardens in Western Japan.

Take the train from Nishitetsu Fukuoka Station to Nishitetsu Futsukaichi Station. Change to the Dazaifu line and get off at Dazaifu Station. Exit the station and turn right down a high street with lots of souvenir shops. Turn right at the end of the street (the opposite way from Tenmangu Shrine) and walk for about 100m.

The Beauty of Fukuoka's Moss Temple

Komyozenji Temple in Fukuoka hides a quiet and undisturbed harmony between humanity and nature in this peaceful garden.

Komyozenji Temple in Dazaifu, Kyushu, is a Zen temple founded in 1273 by the Buddhist priest Tetsugyu Enshin, a member of the Sugawara family. The temple is particulary known for its rhododendrons and autumn leaves, and it is one of the most famous temples in Kyushu that has Karesansui (dry landscape) stone gardens.

Sightseeing the sprawling area of Dazaifu Tenmangu can leave you feeling a little drained. Rejuvenate at the nearby Hotel Grantia Dazaifu.

Making use of 2,000 pieces of wood batons, the interior of Starbucks Dazaifu is literally cocooned by a weave of cedar wood. This amazingly beautiful Starbucks café was designed by none other than world-renowned architect Kengo Kuma.

The Dazaifu Tenmangu Shrine is located in the eponymous city of Dazaifu on the main island of Kyushu. Shinto Tenmangu shrines are all dedicated to the scholar Sugawara no Michizane who was elevated to the deity of Tenjin. The Dazaifu Tenmangu Shrine is one of the three most important of its kind in Japan. The original shrine was probably built in 905 on the grave of Michizane, who died here in exile, and was expanded over the years by the Fujiwara clan. After a fire, today's shrine was built in 1591 and is considered an important cultural asset of Japan. The entire area of ​​the shrine extends over more than 12 km² and is home to numerous side shrines of relatives and students of Michizane, more than 6,000 Japanese plum trees and a number of huge camphor trees, some of which are estimated to be around 1,500 years old. Because of its dedication, people come here primarily to ask for good results in exams and for learning success.

Fukuoka Hakatanomori Stadium, also known as Level 5 Stadium, has 22,500 seats, many of which are so close to the field that the audience really feels they are part of the action. A practical factor is the stadium's proximity to Fukuoka International Airport, which is only a 15-20 minute walk away. Both football and rugby matches are regularly held at Fukuoka Hakatanomori Stadium. Games were also played here during the 2019 Rugby World Cup. The stadium is located in Higashi HiraoPark, which includes a baseball and tennis facility, an athletics stadium and the "Accion Fukuoka", which consists of a hall and a swimming stadium.

The Kyushu National Museum is as remarkable for the design of its building as for the scope and thoroughness of its exhibits.