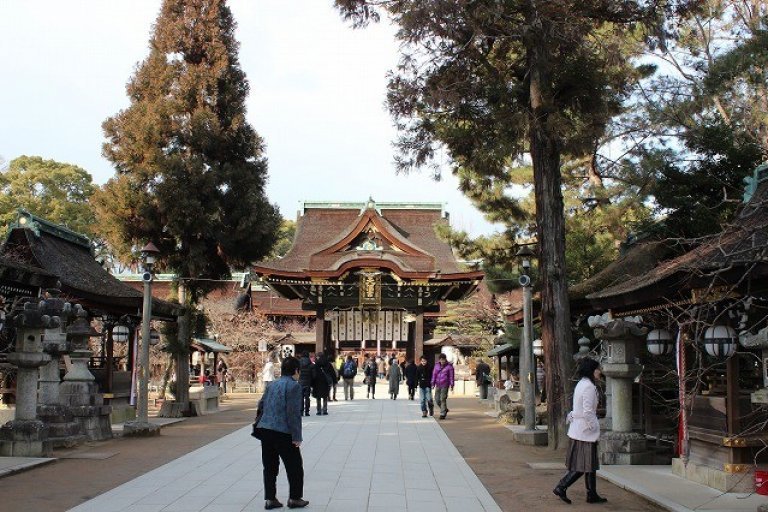 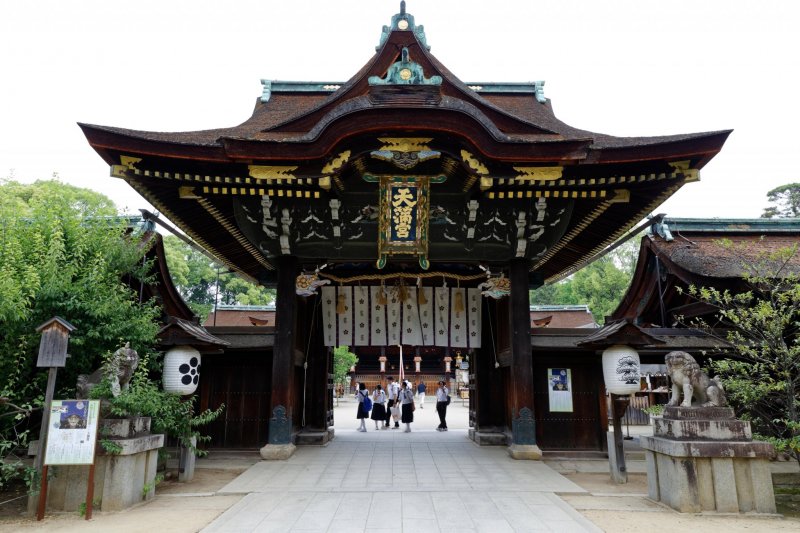 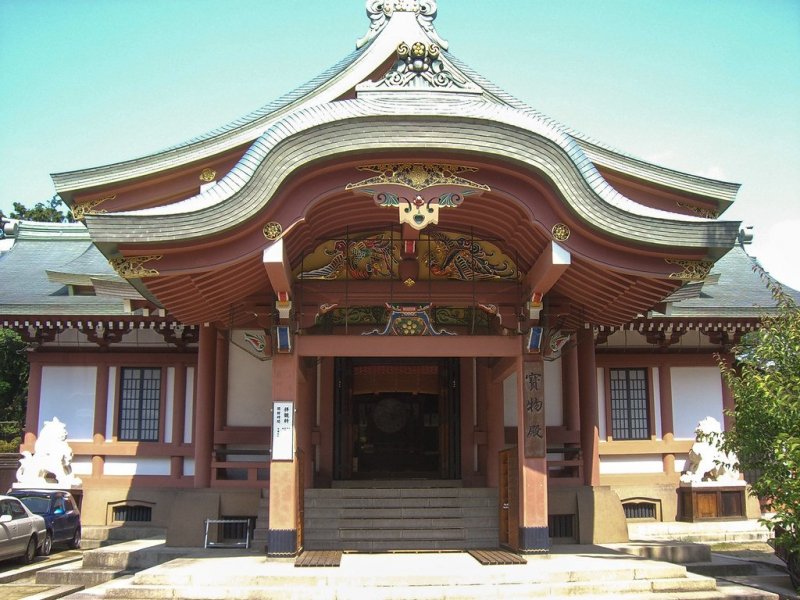 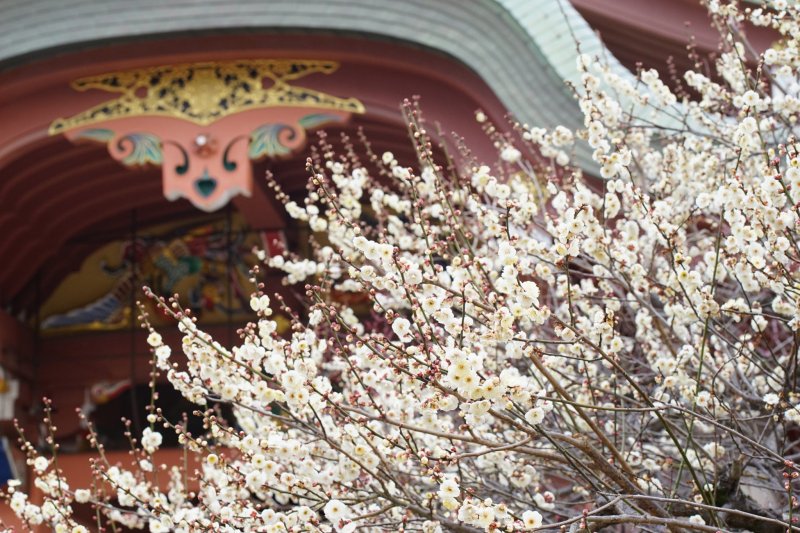 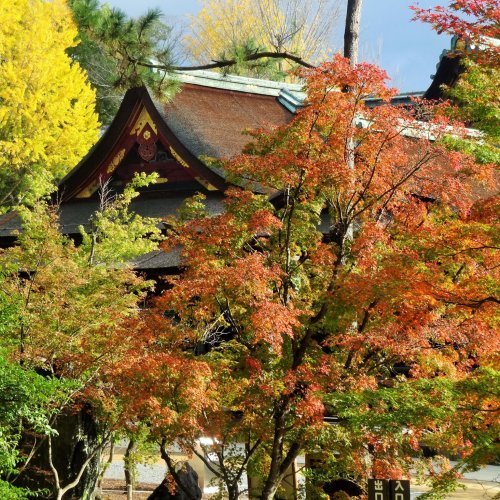 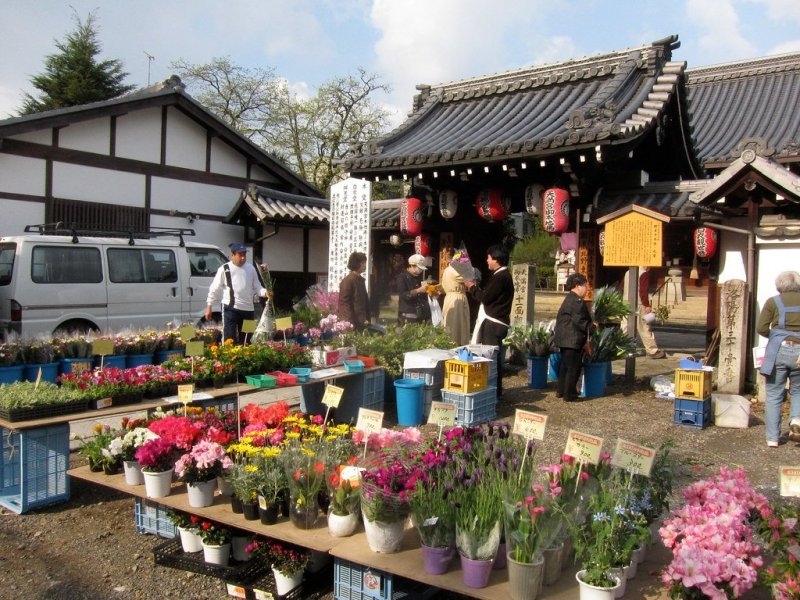 Known for its academic blessings, Kitano Tenmangu is a Shinto shrine in Kyoto’s Kamigyo ward that is dedicated to Sugawara no Michizane, an influential scholar and politician. The shrine was built in 947 AD and is Japan’s first shrine to enshrine an actual person as a deity. Although there are numerous shrines throughout Japan dedicated to Michizane who is mainly known as a god of academics, Kitano Tenmangu is the original one.

The massive Ro-mon Gate stands as the border between the city and the shrine grounds. This wooden structure, detailed with gold-and-wooden carvings, serves as an introduction to the architectural mastery ahead. Upon entering, it is customary to go to the chozuya and perform a hand-cleansing ritual. After you complete the ritual, explore the shrine’s tranquil grounds.

This structure enshrines Michizane as a deity. Please note that you can only enter the building if you apply for charms or prayer. Otherwise, walk around the exterior and admire the structure’s exquisite detailing and traditional charm.

Sanko-mon gate is an inner gate that leads to the main hall and features the same ornate detailing as the ro-mon gate.

This shrine building houses artifacts that worshippers have offered in prayer over the past years and is open to the public on the 25th of every month. The treasure house exhibits picture scrolls, historical documents, swords, and tea ceremony tools, as well as other items.

Michizane loved plum trees. So, from February to March, the shrine’s plum tree grove, with over 2,000 trees, opens to the public. This shrine is nationally renowned for its plum blossoms and has an annual festival on February 25th when you can view the blossoms and enjoy tea served by geiko and maiko.

From late October to early December you can view autumn leaves at the temple's maple tree garden for a ¥1,000. During this time the temple is open until 20:00 with illumination.

On the 25th of every month, Kitano Tenmangu holds a street market inside and outside the shrine grounds. The lively stalls sell festival foods, tools, toys, crafts, clothes, and more!

There are city buses running frequently from Kyoto station to the Kitano Tenman-gu-mae bus stop, which would cost you around ¥230 and will take around 30 minutes.

This enshrined deity of scholarship helps those wishing to pass examinations.

This flea market has a variety of traditional goods perfect for gifts, souvenirs or household use.

Kitano Tenmangu's maple path is a recent addition to the list of worthwhile autumn foliage spots in Kyoto.

Located northwest of Kyoto near the famous Golden Pavilion, Kitano Tenman-gu is a Shinto shrine where Sugawara no Michizane, an aristocrat from the ninth century, is worshipped as the deity of education. A tea ceremony is held within the shrine precincts every year on February 25 during the Plum Blossom Festival. Surrounded by hundreds of plum trees in full bloom, around thirty geiko (a local term in Kyoto for geisha) and maiko from the neighbouring geisha district (Kamishichi-ken) will serve matcha tea to visitors, accompanied by delicious Japanese sweets.

Hirano Shrine in the north of Kyoto hosts a hanami festival each year. The hanami scenery is fantastic and the party atmosphere, cherry blossom season style, is great.

Mrs. Matsui’s family home was previously a workshop that produced hand-woven obi sashes. Today, the guest room is open for guests to experience an authentic side of Kyoto, with views of the courtyard garden on two sides.  Experience sleeping Japanese style on the futon bedding, laid out on a tatami straw mat. There is air conditioning and heating, as well as tea making facilities.  Like many old houses, the shower and bathroom are located in the courtyard.  Alternatively, walk down to the public bath or sento, or try the bicycle to explore further afield.  Kinkakuji, or the Golden Temple is a short ride away, as is the Ryoanji stone garden.

Close to Nijo Castle in Japan's most historic city, this stylish, modern hotel is comfortable, well located and supremely affordable.

An 80-year-old bathhouse is transformed into a cafe, whilst retaining its features reminiscent of Hayao Miyazaki's Academy Award winning film 'Spirited Away'.

With the growing popularity of veganism, particularly in Japan, vegans can now enjoy ramen at both entirely vegan and vegan-friendly joints throughout the country. Here are three spots to check out in Kyoto.

Well known as the Golden Pavilion, Kinkaku-ji is a three-story Zen Buddhist temple in northern Kyoto. Kinkaku-ji and Ginkaku-ji (Silver Pavilion) were built in the 13th century and were originally intended as noble villas for the Ashikaga shoguns. Today the building is also known as Rokuon-ji. Kinkaku-ji houses several important Buddhist relics and is a sacred place for the Rinzai sect of Japanese Buddhism. Each floor of the temple conveys a different architectural style. The first floor is in the Shinden style, the second floor in the Bukke style and the third floor in the Chinese Zen style. Thus became one of the most photogenic temples in all of Kyoto. The temple was once the retirement villa of the shogun Ashikaga Yoshimitsu. After his death in 1408 he wanted to give the building to the Rinzai sect as a Zen temple. The grounds of the Kinkaku-ji Temple used to consist of several other buildings, but unfortunately burned down in the fires and destruction during the Onin War in the 1400s. The building you see today was also rebuilt in 1955.

Ryoanji Temple is home to Japan’s most famous Zen stone garden and one of Kyoto’s most iconic scenes. Believed to be built back in the Muromachi period (14th - 16th century), the origin and designer of the garden is still unknown to this day. The stones in the garden are intentionally placed so that one cannot view all 15 stones from any one angle. The meticulous design of this karesansui (Japanese rock garden) leads many to credit the celebrated artist, Soami, as the garden’s creator—albeit unproven. The 248-square meter garden bears little trace of greenery, and is instead immaculately lined with raked white gravel. The seemingly random placement of the stones adds to the mystique of Ryoan-ji, its abstract layout leaving visitors questioning the meaning and purpose of the garden. While the garden remains a mystery, the history of Ryoanji Temple is well documented. The temple buildings were originally a Heian Period villa, and were converted into a Zen temple in 1450. Now, Ryoanji is part of the Myoshin-ji school in the Rinzai sect of Zen Buddhism. In 1994, Ryoanji’s immaculate zen stone garden was recognised as a UNESCO World Heritage Site, and is also designated as a Historic Monument of Ancient Kyoto.