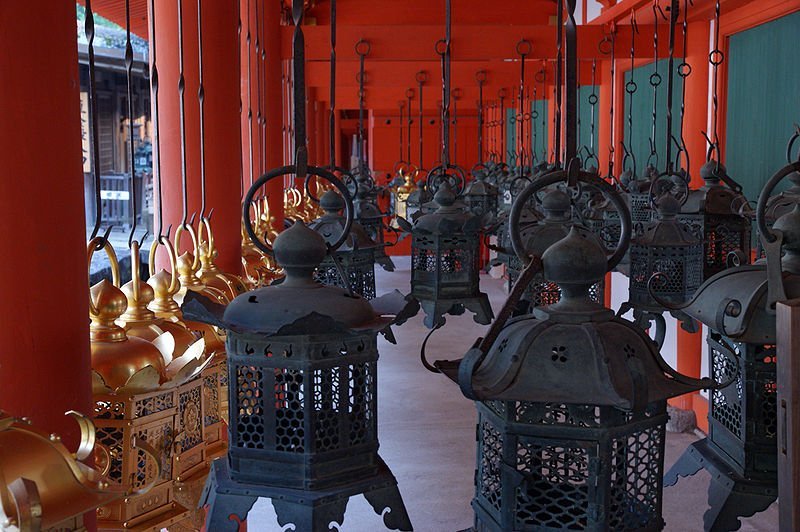 The great Kasuga Shrine (Kasuga Taisha) is located in Nara Park. It was built at the same time as the capital and is dedicated to the deity responsible for protecting the city. The shrine was recognized as a UNESCO World Heritage Site in 1998.

The shrine is also home to the Kasuga Taisha Museum, which houses some of the relics. This includes two sets of large, ornate drums.

Traditional performing arts can be enjoyed at this annual festival held since the 12th century.

At the Kasuga Taisha Shrine in Nara, more than 3,000 lanterns in the precincts are lit up.

Kasuga Taisha Shrine is one of the icons of the ancient capital of Nara: Deer, wisteria and 3000 lanterns are some of the enjoyable highlights.

Visit Kasuga Taisha Shrine in Spring and enjoy the unique ambience of weeping cherry blossoms against a striking background of red pillars and tawny Hinoki cypress.

The Stone Lanterns of Kasuga Shrine

The Kasuga Shrine has its own place in Japanese history, but to the average traveler is it hard to ignore the 3000 plus lanterns that litter the entrance path.

Walking along the path that leads to Kasuga Taisha shrine is like walking back in time, to a place where time stood still, where nature and human arts combine beautifully.

Traditional performing arts can be enjoyed at this annual festival held since the 12th century.

At the Kasuga Taisha Shrine in Nara, more than 3,000 lanterns in the precincts are lit up.

Nara is a relatively small city that has several options when it comes to deciding on a place to stay. One of these places is Hotel Sunroute and somewhere that is definitely

Hotel Wellness Asukaji is a typical Japanese BBB (Bed, Bath and Breakfast). This conveniently located hotel just off of Nara Park offers a tranquil, relaxing low key option for those headed to Nara for a weekend getaway.

Luxury hotel in the heart of Nara Park, located near Kofukiji and close to Araike lake.

During the summer season, at Kurokawa Honke (黒川本家), located in Nara city, many dishes with arrowroot incorporated, like the cold pasta made with arrowroot starch, are served. The restaurant is a mid-range, stylish, and chic location that offers a peaceful and welcoming dining atmosphere and experience.

A Gift of Food from Nara

Nara has a long and rich history, and it shows in the amazing variety of food unique to the area.